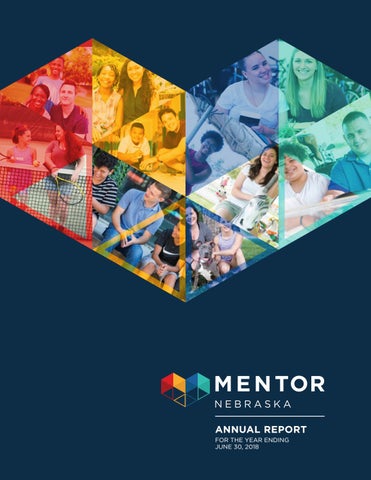 Dear Stakeholders, MENTOR Nebraska has seen tremendous growth over the past year and we are currently working with 12 Omaha partner agencies that serve thousands of mentor-mentee matches in the Omaha metro area. These mentees are youth that have an extra adult to help with everything from writing college essays to discussions on bullying and peer pressure, and who genuinely care about their wellbeing and success. As we look at how we can continue to grow and serve more organizations and therefore, more children, it has become clear that we need to look at expanding our scope and our mission. In 2018, weâ&amp;#x20AC;&amp;#x2122;ve held discussions with key business leaders, collaborators, and change makers in communities across the state. What we are seeing is an incredible need to see strong mentoring programs in towns from Lincoln to Scottsbluff. With this in mind, we are excited to announce that in January 2019, Midlands Mentoring Partnership became MENTOR Nebraska. With this change we are able to provide training and support to organizations and schools across the state that would like to strengthen or incubate new mentoring programs, but currently lack the expertise and resources to do so. Please continue to invest your time, energy, and resources into us as we embark on this exciting new adventure. Stay tuned!

Note: All photos on front and back cover are of mentoring matches from Omaha

In 2011, the organization becomes an affiliate of MENTOR: The National Mentoring Partnership. MENTOR works at the crossroads of education, business and community, facilitating a network of affiliates and more than 5,000 mentoring programs across 50 states.

In th As ou so

n 2014, the organization received he Catalyst Award by the Nonprofit ssociation of the Midlands for ur collaborative and innovative ocial media campaigns.

In 2015, the organization became a Nonprofit Association of the Midlands Best Practice Partner.

In 2016, the organization received the Spirit of Omaha Best Education Event and was honored by the Better Business Bureau with its annual Integrity Award.

In 2019, the organization will become MENTOR Nebraska and will expand service area across the state of Nebraska.

In 2018, the organization launched its 4th annual city-wide mentor recruitment campaign with the Mayorâ&amp;#x20AC;&amp;#x2122;s office, Greater Omaha Chamber, and local mentoring programs. As a result of this collaboration, we have increased the number of mentoring matches in the Omaha metro by 22%.

BACKGROUND CHECKS Covered the cost of 7,045 background checks since 2011

INTENTIONAL MENTORING YOUTH INITIATED MENTORING FOR JUVENILE JUSTICE YOUTH A cutting edge mentor matching process originally brought to Omaha by our organization and implemented in 2014, called Youth Initiated Mentoring (YIM), is extremely successful with justice involved youth. YIM harnesses a young person’s ability to recruit adults in their lives who are likely qualified for mentorship and who are aware of that particular youth’s background, personal history and challenges. In 2018, research on our YIM model was featured in the Journal of Adolescent Research. Findings from the study, conducted by Dr. Renee Spencer of Boston University and Dr. Jean Rhodes of the University of Massachusetts-Boston, found the YIM approach “empowered the youth to identify a mentor on their own, which allowed them the opportunity to reflect on and define what attributes of a mentor they found most important.” The study also found youth spoke about how having a say in who their mentor would be was a part of what motivated them to decide to participate in the mentoring program.

SUCCESS MENTORS FOR CHRONICALLY ABSENT YOUTH Based on a model implemented in 2010 by Mayor Michael Bloomberg, and rolled out in 2015 under the Obama White House’s My Brother’s Keeper initiative, our organization brought the Success Mentors model to Omaha in 2017, to help support students who struggle with chronic absenteeism. This model has been facilitated in partnership with Omaha Public Schools (OPS). In the 17-18 school year, 135 students were served across six OPS schools. The schools include: Skinner Elementary, King Science &amp; Technology Magnet, Belvedere Elementary, Minne Lusa Elementary, Conestoga Elementary and Monroe Middle School.

VISION MENTOR Nebraskaâ&amp;#x20AC;&amp;#x2122;s vision is for every young person to have the supportive relationships they need to grow and develop into thriving, productive, and engaged adults.

IN THIS NEW LEADERSHIP ROLE, MENTOR NEBRASKA WILL WORK TOWARD THE FOLLOWING GOALS: To be a unifying entity that can strengthen advocacy and resource development for all mentoring programs To increase tracking of how many young people are being mentored and improve quality of the mentoring programs overseeing the matches To improve the means of evaluating the positive outcomes associated with mentoring relationships To advocate for state and federal funding To increase the number, quality, and safety of mentoring relationships To collaborate on mentor recruitment and referral To provide training and technical assistance to mentoring organizations To raise public awareness To help report the financial return for investment in youth mentoring To help ensure the safety and success of every mentoring match

EXPANDING THROUGHOUT NEBRASKA MENTOR Nebraska is the only entity in Nebraska that serves in the unique role of providing backbone support to mentoring agencies. There is no other entity positioned to provide these services to mentoring programs and schools. We are a team of professionals with expertise on all facets of building mentoring programs and building organizational capacity. Additionally, our team has the expertise in place to provide training supports and innovative ideas across the state of Nebraska. And, because of our reputation on a national level, we have opportunities for earned revenue support so that we can provide our services and training at no cost to Nebraska mentoring programs.

One Source: The Background Check Company

The Hope Center for Kids

BOARD MEMBERS Chris Rodgers, Board President, Douglas County Board of Commissioners