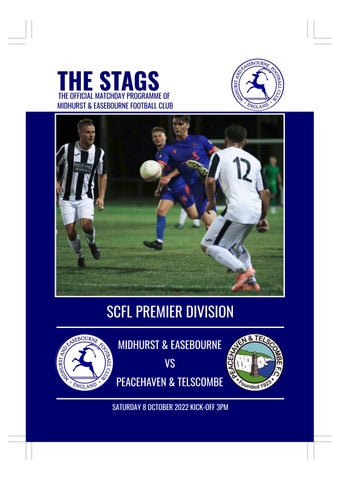 Good Afternoon, welcome back to The Rotherfield. It feels like a long time ago since we last played a Home game with four consecutive away games. I’d like to welcome today’s visitors Peacehaven &amp; Telscombe for this afternoons Southern Combination Premier game. Like to extend my welcome to today’s match officials. Well I’m glad to see the back of September which turned out to be a challenging month for us, with injuries hitting us hard as well as a few defeats which was hard to take especially as at times we dropped our standards. I can accept losing long as we’ve given it a good go. This league is very competitive, results are starting to show that, anyone can really beat anyone which makes it exciting. Since our last Home game we won comfortably at Alfold, got knocked out the FA Vase at Crowborough which was difficult, lost away to Steyning where we gifted them 3 goals which you can’t be doing. Saturday we got back to winning ways at Roffey. We now need to be more consistent over the coming weeks. Squad wise we lost Dan Wood, Marcus Bedford in opening 30 minutes at Roffey Saturday, Currently waiting for an update on them both.

We do have some positive news we’ve added Ryan Chittock from Pagham which will be good once he gets up to speed with us. There’s couple others lads I’m hoping to get sorted as we speak, we’re waiting for clubs to waive the 7 days if not we’re have to be patient. Billy Connor, Kieran Carter will hopefully both be back shortly.

Although officially the club was formed in 1923 as a result of a merger between Peacehaven Rangers and Telscombe Tye. It is recorded that a number of

games were played in 1922 following a meeting of interested players in June of that year. After the second world war the club joined Junior Division one of the Brighton, Hove &amp; District Football League for the start of the 1949–50 campaign finishing runners up at the first attempt. Two seasons later the club achieved promotion to the intermediate division when they finished as champions of the Junior Division one, and gained further promotion the next season when they finished runners-up in the intermediate division. However they could only survive two seasons in the Senior Division before being relegated back to the intermediate division at the end of the 1954–55 competition. Four seasons later the club bounced back up to the senior division, when they finished runners-up but as before they could only survive two seasons in the top division before being relegated again. The 1963–64 season saw the club promoted back to the Senior division as champions of the intermediate Division. The club would then go on to win the Senior division five seasons later, without losing a single game.

The Senior division win in the Brighton league enabled the club to be promoted to Division Two of the Sussex County Football League, for the start of the 1969–70 season. Their fourth season in Division two, the 1972– 73 campaign, saw the club make their debut in the FA Cup, where they beat Burgess Hill Town in the First Qualifying round before losing to Lewes in the next round. The 1975–76 season saw the club gain promotion to Division one for the first time, when they finished runners up behind Selsey. In their third season, 1978–79, in Division one the club ended up finishing as champions of the Sussex County League. The club went on to remain in Division one for another nineteen seasons during which time they went on to win the league title a further six times. Two seasons after winning the last of these six titles, the 1997–98 campaign saw the club relegated to Division two. The club bounced back as runners-up of Division two, three seasons later but could only last two seasons back in Division one. Two seasons after being relegated from Division one, the club was relegated to Division three for the first time in their

history. The next season saw them become champions of Division Three in the 2005–06 season, earning promotion back to Division two. The club was back in Division one three seasons later when under manager Darren Guirey, they earned promotion as champions of Division Two. The club achieved further success at the end of the 2012–13 campaign the club won the Sussex county league for the eighth time in their history and earning themselves promotion to the Isthmian League. In 2013–14, the club won the Isthmian League Division One South and earned a second successive promotion, reaching the Isthmian Premier Division.

Name - Harry Giles Position - Centre Midfield Most Skilful - Marcus Bedford, he could nutmeg a mermaid Quickest - Billy Connor Slowest - Kieran Carter Worst Trainer- Oli Kershaw if and when he turns up Worst Dress - Tough one there’s a few dodgy outfits in the squad but would be Oli Kershaw again Most Intelligent - Lewis Hamilton Least Intelligent - Tough one as this could be a few but I’d say Marcus Bedford

Longest in the Shower - Me by a mile Best player played with - Alfy Whittingham [Pictured, bottom right] back in the Southern League, who now plays National League football Favourite Meal - Love a Curry, Chicken Tikka Dansak Got to Drink - Flavoured water or a Birra Morreti Ronaldo or Messi- Ronaldo all day long Holiday with misses or Lads - Tough one but I’d say lads Team Support - Manchester United Biggest Fear - Snakes