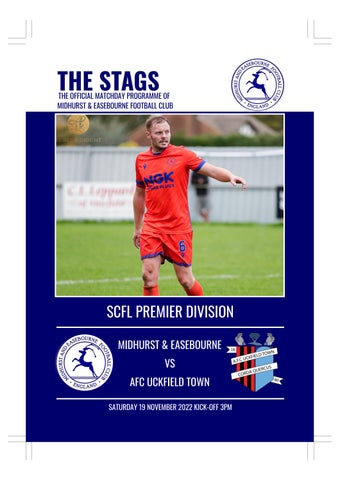 Good afternoon welcome to The Rotherfield for this afternoon’s Southern Combination Premier League fixture. I’d like to extend my welcome to today’s visitors AFC Uckfield Town along with todays match officials.

Following the awful amount of rain it was no surprise that Tuesday’s Sussex Senior Cup game was postponed. We managed to end a run of 4 defeats with a very good performance last weekend away at Saltdean Utd. Having Lewis Hamilton, Harry Tremlett back made a big difference to us. Marcus looked back to where we want him which was pleasing, as he’s struggled with injuries this campaign. Squad wise were slowly getting there, Oli Kershaw, Billy Connor, Jordan Warren are missing today but we do welcome back Liam Dreckmann,Jordan Stallibrass who both return from suspension. Will Essai returns after being at a wedding last weekend. Dan Wood is now able to play following concussion. Enjoy the game

HISTORY The club was formed in July 2014 by a merger of Uckfield Town and A.F.C. Uckfield; it adopted Uckfield Town&#39;s black and red colours for their home kit and A.F.C. Uckfield&#39;s sky blue and navy blue as the away kit. At the time of the merger Uckfield Town were in Division Three of the Sussex County League, whilst A.F.C. Uckfield were in Division Two; the new club took A.F.C. Uckfield&#39;s place in Division Two and continued to play at their Oaks ground. In their first season the club finished second, earning promotion to the Premier Division of the renamed Southern Combination League. GROUND The club play their home games at the Oaks on Eastbourne Road. OTHER TEAMS The club&#39;s reserve team play in the Mid Sussex League, the under-18 team play in the Southern Combination League&#39;s Under 18 (East) Division. The under-17s play in the Mid Sussex Youth League, and the women&#39;s team in the Sussex Women and Girls League.

2018 to present On 30 October 2018 chairman Brian Cordingley stepped down after two years and was replaced by Hastings-based businessman Billy Wood on 3 November. A few days later Wood announced a five-year plan to bring the club into the modern era, involving redeveloping the Oval, bringing the club into the Isthmian league and to gain more support for Eastbourne United Association. In February 2019, the Chairman Billy Wood announced Eastbourne United were to re-brand their home kit and club badge to reflect on their 125th year. In December Wood signed Arron Hopkison as the new Manager. The club were just on 2 points in the league having lost twelve games in a row. Saturday 27 April, the last day of the season, United were still bottom of the league on goal difference but won their last game away at Pagham completed the &#39;Great Escape&#39; with a winner in the last minutes which took them out of the relegation zone and safely finishing the season 18th on goal difference to Arundel, who were relegated into Division One. For the 2019/20 season, Billy stated plans that the club were aiming to finish in the top 6 of the league, but after a bad start and sitting near the bottom of the table, Aaron Hopkinson resigned as manager on the 10 September. His assistant Matthew Crabb took over as caretaker manager which became a permanent position on ten days later. Billy Wood resigned as chairman on 17 September 2019 to become CEO of nearby Hastings United and Brian Cordingley resumed his position as chairman. Matt Crabb resigned as first team manager on 19 October 2020, which assistant manager Ray Collier stepped in to take over as first team manager.