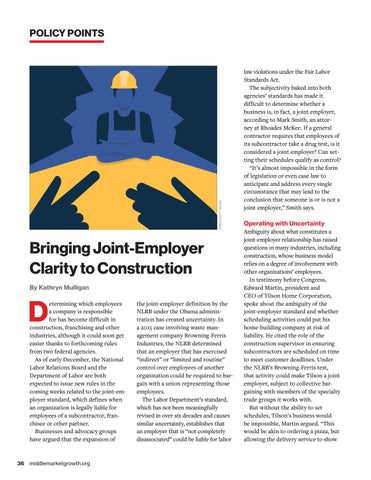 etermining which employees a company is responsible for has become difficult in construction, franchising and other industries, although it could soon get easier thanks to forthcoming rules from two federal agencies. As of early December, the National Labor Relations Board and the Department of Labor are both expected to issue new rules in the coming weeks related to the joint-employer standard, which defines when an organization is legally liable for employees of a subcontractor, franchisee or other partner. Businesses and advocacy groups have argued that the expansion of

the joint-employer definition by the NLRB under the Obama administration has created uncertainty. In a 2015 case involving waste management company Browning-Ferris Industries, the NLRB determined that an employer that has exercised “indirect” or “limited and routine” control over employees of another organization could be required to bargain with a union representing those employees. The Labor Department’s standard, which has not been meaningfully revised in over six decades and causes similar uncertainty, establishes that an employer that is “not completely disassociated” could be liable for labor

law violations under the Fair Labor Standards Act. The subjectivity baked into both agencies’ standards has made it difficult to determine whether a business is, in fact, a joint employer, according to Mark Smith, an attorney at Rhoades McKee. If a general contractor requires that employees of its subcontractor take a drug test, is it considered a joint employer? Can setting their schedules qualify as control? “It’s almost impossible in the form of legislation or even case law to anticipate and address every single circumstance that may lead to the conclusion that someone is or is not a joint employer,” Smith says. Operating with Uncertainty Ambiguity about what constitutes a joint-employer relationship has raised questions in many industries, including construction, whose business model relies on a degree of involvement with other organizations’ employees. In testimony before Congress, Edward Martin, president and CEO of Tilson Home Corporation, spoke about the ambiguity of the joint-employer standard and whether scheduling activities could put his home-building company at risk of liability. He cited the role of the construction supervisor in ensuring subcontractors are scheduled on time to meet customer deadlines. Under the NLRB’s Browning-Ferris test, that activity could make Tilson a joint employer, subject to collective bargaining with members of the specialty trade groups it works with. But without the ability to set schedules, Tilson’s business would be impossible, Martin argued. “This would be akin to ordering a pizza, but allowing the delivery service to show