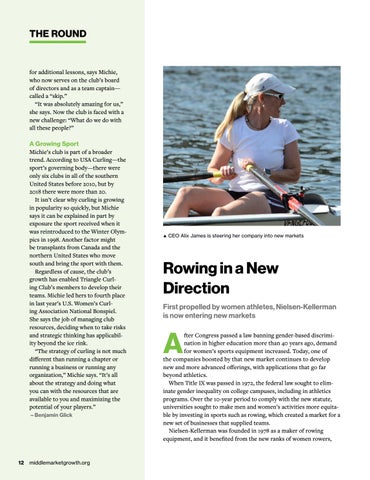 for additional lessons, says Michie, who now serves on the club’s board of directors and as a team captain— called a “skip.” “It was absolutely amazing for us,” she says. Now the club is faced with a new challenge: “What do we do with all these people?” A Growing Sport Michie’s club is part of a broader trend. According to USA Curling—the sport’s governing body—there were only six clubs in all of the southern United States before 2010, but by 2018 there were more than 20. It isn’t clear why curling is growing in popularity so quickly, but Michie says it can be explained in part by exposure the sport received when it was reintroduced to the Winter Olympics in 1998. Another factor might be transplants from Canada and the northern United States who move south and bring the sport with them. Regardless of cause, the club’s growth has enabled Triangle Curling Club’s members to develop their teams. Michie led hers to fourth place in last year’s U.S. Women’s Curling Association National Bonspiel. She says the job of managing club resources, deciding when to take risks and strategic thinking has applicability beyond the ice rink. “The strategy of curling is not much different than running a chapter or running a business or running any organization,” Michie says. “It’s all about the strategy and doing what you can with the resources that are available to you and maximizing the potential of your players.” —Benjamin Glick

fter Congress passed a law banning gender-based discrimination in higher education more than 40 years ago, demand for women’s sports equipment increased. Today, one of the companies boosted by that new market continues to develop new and more advanced offerings, with applications that go far beyond athletics. When Title IX was passed in 1972, the federal law sought to eliminate gender inequality on college campuses, including in athletics programs. Over the 10-year period to comply with the new statute, universities sought to make men and women’s activities more equitable by investing in sports such as rowing, which created a market for a new set of businesses that supplied teams. Nielsen-Kellerman was founded in 1978 as a maker of rowing equipment, and it benefited from the new ranks of women rowers,