At Fox Chase Farm, it’s all about conservation

from Leader: Preserving Our Land
by MidAtlantic Farm Credit

from 'Leader: Preserving Our Land' 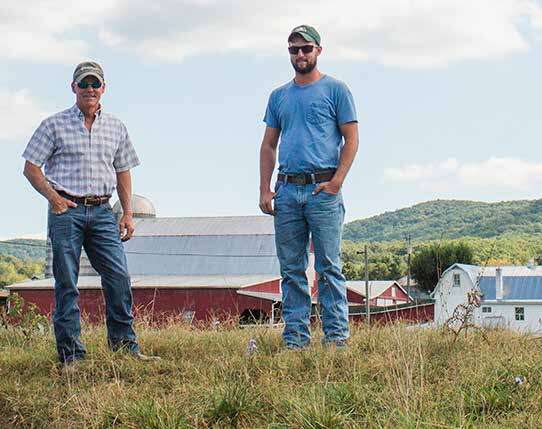 Seclusion for environmental in...

At Fox Chase Farm, it’s all about conservation

STORY AND PHOTOS BY NANCY L. SMITH | IT MAY BE DIFFICULT TO IMAGINE ANYTHING GOOD COMING OUT OF A CHICKEN HOUSE COLLAPSE THAT KILLED 20,000 BIRDS AT TERRY BAKER’S FOX CHASE FARM IN MILLSBORO, DELAWARE. TERRY FACED A MASSIVE CLEAN-UP CHALLENGE AND, AFTER THAT 2010 DISASTER, HE STARTED THINKING THERE HAD TO BE A BETTER WAY TO DISPOSE OF DECEASED CHICKENS.

Although such catastrophic losses are uncommon, Terry estimates that routine/ daily mortality for all poultry farms on the Eastern Shore totals about 70,000 tons annually, creating an environmental headache and lots of work.

In 2012, with the memory of the disaster still fresh, Terry and a friend started Greener Solutions, a company that installs large freezer storage units on chicken farms.  Greener Solutions empties the units between flocks and hauls the frozen carcasses to a rendering plant for recycling.

Switching from composting to freezing on his own farm, says Terry, “was a game changer. There are no buzzards. There are no fox dens anymore; there’s nothing to eat. The smell is gone.”

Freezers have been used to store mortality in the South for more than 30 years. “This is a proven technology, but it didn’t exist here. We think it’s because composting was adopted across the board.”

The Natural Resources Conservation Service (NRCS) cost shares 75 percent of the freezers and concrete pads. In Delaware, farmers are reimbursed for 75 percent of the collection fee, which averages $300 to $400 depending on mileage and the number of freezers, as part of the manure relocation program.

Terry reports the Chesapeake Bay Program is studying mortality management methods, including composting, incineration, landfill disposal, and freezing and rendering. The panel will determine the credits that states get toward their nutrient reduction goals. “As soon as the panel’s work is done, the state will get retro credit for everything they’ve done for the past three years, if the assessment is positive,” says Terry. Freezers already have interim Best Management Practice (BMP) status.

In addition to reducing runoff, smell, flies and vermin, Terry says freezing reduces labor and time spent composting. “We have estimated that one farmer who composts can take care of four chicken houses, but if you add freezers, you’d free up enough time for the farmer to take care of another chicken house.

“If you compost properly, it’s a lot of work, whereas with the freezers, you open the door, place it in, and close the door. That’s the last time the farmer has anything to do with it.”

Terry’s conservation efforts also include a 222 kilowatt solar installation that went online in 2018. It produces 110 percent of the power used on the farm. “I used to average $38,000 per year for electricity bills. My payments for the panels are only $32,000 so it’s saving $6,000 per year right off the top. In 12 years, I will own the panels.”

The system conserves both electricity and cash. Terry says, “I get depreciation and 30 percent tax credits.” Additionally, the Energize Delaware program offers two percent interest loans and Delmarva Power buys “S Reg credits” for an extra $8,000 a year or so for 10 years.

Terry’s farm could be a model site for conservation planting projects. He has planted Miscanthus grass in front of his tunnel fans. The grass “sucks up ammonia and dust particles so they don’t spread into the atmosphere. Some other plants won’t live in front of the fans, but that does.”

He planted a mix of evergreens and deciduous trees when he built his latest chicken houses. They block the wind, so winter heating costs go down, he explains.

Also, “transpiration cools the air. I planted the evergreens and trees between the houses, so in the summertime when you suck the air into the houses, it’s cooler air and you get better livability of the birds.”

A quarter to half acre bee pollinator garden reduces grass cutting, which saves “fuel, the environment, the bees, and time.” There is also a bog to filter rainwater. “Nobody’s paying for that. It collects the rainwater that filters through the ditch and cleans up anything that is being washed into the ditches.”

For his extensive conservation work, Terry was awarded the 2018 Environmental Steward of the Year award by the US Poultry and Egg Association. His efforts with the poultry freezers, solar panels and bee pollinator garden are making a lasting impact to protect our bountiful environment.

TERRY BAKER AND HIS WIFE, FILOMENA, HAVE THREE CHILDREN AND A NEPHEW WHO LIVES WITH THEM. TERRY IS A MEMBER OF LEADELAWARE CLASS V, WHICH HE SAYS “HAS BEEN A REALLY GREAT EXPERIENCE. I HAVE DONE A LOT OF THINGS I WOULD NEVER HAVE DONE. THEY LIKE TO GET YOU TO PUSH YOUR LIMITS.” HE WILL TRAVEL TO VIETNAM AND CAMBODIA WITH HIS CLASS IN FEBRUARY AS THE CAPSTONE OF THE PROGRAM. FARM CREDIT LOAN OFFICER STEVE MORRIS HAS ENCOURAGED AND ADVISED TERRY ON HIS CONSERVATION EFFORTS AND PRAISES FREEZERS AS AN IMPORTANT ELEMENT IN THE BIOSECURITY OF THE FARM.
This story is from:
Leader: Preserving Our Land
by MidAtlantic Farm Credit