from Leader: Preserving Our Land
by MidAtlantic Farm Credit

from 'Leader: Preserving Our Land' 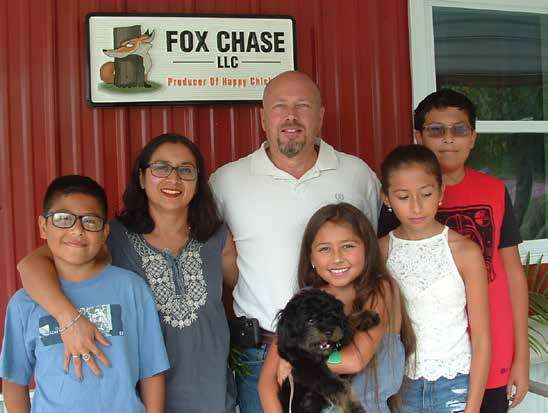 STORY AND PHOTOS BY ANDREA HAINES | ANYONE WHO HAS BEEN INVOLVED IN SOME REALM OF AGRICULTURE CAN SPEAK ON THE TRUE LINK BETWEEN FARMERS AND THE ENVIRONMENT—IT’S A PARTNERSHIP.

The Lambert brothers’ partnership, Donnie and Charlie, is part of a multigenerational farming family in Frederick, Maryland. Like their family predecessors before them, the brothers are wellversed in their farm’s needs along with multiple properties around Frederick County, taking into consideration the needs of their surrounding community.

A barn adorned with the name, Springview Farm, rests on the property they call the “home farm”. Alongside that is the home their mother, Esther, shared with their late father, Paul “Sonny” Lambert, who passed away in 2011. “We learned much of what we know today from our parents,” shares Donnie. “They were very involved with the daily operations and in the community. Mom still is, as she is the farm bookkeeper.”

The farm is family-run with seven full-time employees. “We are milking 270 head of Holsteins and Jerseys,” says Charlie. “We built a new heifer facility recently and they have been doing well.” The brothers raise close to 300 heifers, and farm over 1,200 acres of properties within Frederick County. Crops raised on the properties are corn, soybeans, triticale, barley, and rye. Donnie mentions, “The majority of the crops we grow are harvested for animal consumption.”

The brothers have been implementing a more environmentallyfriendly method with their manure handling. “In 2017, the Lamberts installed an upgrade to their waste storage system,” explains a release provided by Denny Remsburg, district manager for local soil conservation. “Included was the decommission of their current waste structure built in the 70s. The heavy-use area was reshaped and graded to ensure any wastewater was directed into the reception pit that replaced the decommissioned pit. The bunker silos were changed to a high-low flow system to capture and treat silage leachate (leakage).”

The brothers especially liked that they were able to incorporate the highlow flow system. “It really captures the water and drains in the direction we want the waste,” shares Charlie. “Beforehand, when we had wet weather, the water flowed through the cows’ lot and collected manure that would run down into places undesired. Now, it just flows under the lot and into the wastewater.”

The final project was construction of a 2.7 million gallon Slurrystore tank to receive manure from the reception pit. This addition allows the Lamberts to store manure until they are ready to apply it to fields.

“We can already tell a difference in yield from last year,” shares Donnie. “Having more flexibility to apply manure to fields when we actually ‘need it’ versus when we ‘have to’ has been a positive outcome.” The brothers also use a new mode of manure application: reduced tillage by injection. “The speed and overall coverage is definitely beneficial,” comments Charlie. “By injecting the manure into the disc path, there is less tillage of the soil, resulting in less runoff. The manure spreader is also state-owned, meaning less cost in the end for us, too.”

However, funding hasn’t been a primary stronghold in the decision making of the Lambert brothers. “The ag industry has been hard at times, especially lately,” expresses Donnie. “We’ve always had a strong relationship with Farm Credit and they’ve taken care of our needs.” Farm Credit loan officer Kelli Wilson started working with the Lambert family when their parents were, so to speak, “still meeting around the kitchen table.” Kelli reminisces, “I have an ag background, but I also learn a lot from our customers. The Lamberts’ home was where I had some of my very first meetings.”

Donnie chuckles, “It feels like we have her on speed dial sometimes. In all seriousness, the availability and structure of the staff at Farm Credit has been great. They are knowledgeable about agriculture and especially in low-economic times, they are able to flow with the farmers to work as a team.” Charlie says, “Well, how can we not trust a company that has ‘Farm’ in the name? We figured we’d keep on with them.” The Lamberts are cherished by their community through other avenues in their church, carriage rides and horses, youth events, and so forth. “It’s important to work with our surroundings and this is just another opportunity to do the best we can for everyone,” shares Donnie.

THE FAMILY’S MOST RECENT PROJECT IS A COMBINATION-ROOFED HEAVY USE AND MANURE STORAGE AREA FOR THEIR DAIRY HEIFERS THAT WERE MOVED CLOSER TO HOME. THIS 288’X 40’ BUILDING INCLUDES SIX SECTIONS TO HOUSE THE ANIMALS BASED ON AGE AND SIZE, AND A DRY MANURE STACKING AREA TO STORE BED-PACK MANURE UNTIL OPTIMAL SPREADING CONDITIONS ARE AVAILABLE. PLANS ARE IN THE WORKS FOR ANOTHER ROOFED HEAVY USE AREA/STACKER FOR MORE HEIFERS. IN 2018, THE FAMILY WAS HONORED WITH THE FREDERICK COUNTY SOIL CONSERVATION FARM FAMILY OF THE YEAR TITLE.
This story is from:
Leader: Preserving Our Land
by MidAtlantic Farm Credit