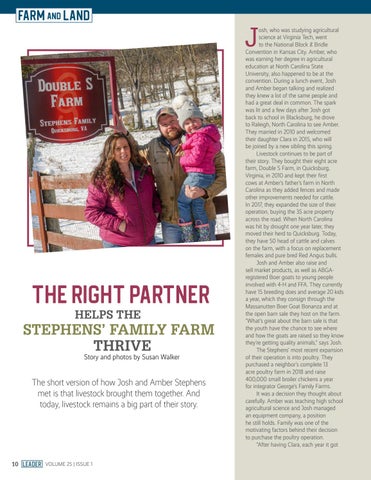 The Right Partner HELPS THE

The short version of how Josh and Amber Stephens met is that livestock brought them together. And today, livestock remains a big part of their story.

osh, who was studying agricultural science at Virginia Tech, went to the National Block & Bridle Convention in Kansas City. Amber, who was earning her degree in agricultural education at North Carolina State University, also happened to be at the convention. During a lunch event, Josh and Amber began talking and realized they knew a lot of the same people and had a great deal in common. The spark was lit and a few days after Josh got back to school in Blacksburg, he drove to Raleigh, North Carolina to see Amber. They married in 2010 and welcomed their daughter Clara in 2015, who will be joined by a new sibling this spring. Livestock continues to be part of their story. They bought their eight acre farm, Double S Farm, in Quicksburg, Virginia, in 2010 and kept their first cows at Amber’s father’s farm in North Carolina as they added fences and made other improvements needed for cattle. In 2017, they expanded the size of their operation, buying the 35 acre property across the road. When North Carolina was hit by drought one year later, they moved their herd to Quicksburg. Today, they have 50 head of cattle and calves on the farm, with a focus on replacement females and pure bred Red Angus bulls. Josh and Amber also raise and sell market products, as well as ABGAregistered Boer goats to young people involved with 4-H and FFA. They currently have 15 breeding does and average 20 kids a year, which they consign through the Massanutten Boer Goat Bonanza and at the open barn sale they host on the farm. “What’s great about the barn sale is that the youth have the chance to see where and how the goats are raised so they know they’re getting quality animals,” says Josh. The Stephens’ most recent expansion of their operation is into poultry. They purchased a neighbor’s complete 13 acre poultry farm in 2018 and raise 400,000 small broiler chickens a year for integrator George’s Family Farms. It was a decision they thought about carefully. Amber was teaching high school agricultural science and Josh managed an equipment company, a position he still holds. Family was one of the motivating factors behind their decision to purchase the poultry operation. “After having Clara, each year it got