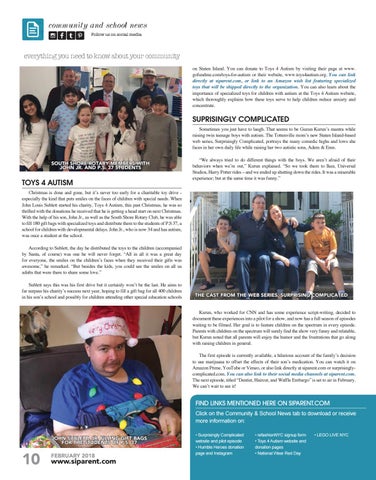 everything you need to know about your community on Staten Island. You can donate to Toys 4 Autism by visiting their page at www. gofundme.com/toys-for-autism or their website, www.toys4autism.org. You can link directly at siparent.com, or link to an Amazon wish list featuring specialized toys that will be shipped directly to the organization. You can also learn about the importance of specialized toys for children with autism at the Toys 4 Autism website, which thoroughly explains how these toys serve to help children reduce anxiety and concentrate.

suprisingly complicated Sometimes you just have to laugh. That seems to be Guzun Kurun’s mantra while raising twin teenage boys with autism. The Tottenville mom’s new Staten Island-based web series, Surprisingly Complicated, portrays the many comedic highs and lows she faces in her own daily life while raising her two autistic sons, Adem & Eren. South Shore Rotary members with John Jr. and P.S. 37 students

“We always tried to do different things with the boys. We aren’t afraid of their behaviors when we’re out,” Kurun explained. “So we took them to Ikea, Universal Studios, Harry Potter rides – and we ended up shutting down the rides. It was a miserable experience; but at the same time it was funny.”

Christmas is done and gone, but it’s never too early for a charitable toy drive especially the kind that puts smiles on the faces of children with special needs. When John Louis Sublett started his charity, Toys 4 Autism, this past Christmas, he was so thrilled with the donations he received that he is getting a head start on next Christmas. With the help of his son, John Jr., as well as the South Shore Rotary Club, he was able to fill 180 gift bags with specialized toys and distribute them to the students of P.S 37, a school for children with developmental delays. John Jr., who is now 34 and has autism, was once a student at the school. According to Sublett, the day he distributed the toys to the children (accompanied by Santa, of course) was one he will never forget. “All in all it was a great day for everyone, the smiles on the children’s faces when they received their gifts was awesome,” he remarked. “But besides the kids, you could see the smiles on all us adults that were there to share some love.” Sublett says this was his first drive but it certainly won’t be the last. He aims to far surpass his charity’s success next year, hoping to fill a gift bag for all 400 children in his son’s school and possibly for children attending other special education schools

The cast from the web series, Surprising Complicated Kurun, who worked for CNN and has some experience script-writing, decided to document these experiences into a pilot for a show, and now has a full season of episodes waiting to be filmed. Her goal is to feature children on the spectrum in every episode. Parents with children on the spectrum will surely find the show very funny and relatable, but Kurun noted that all parents will enjoy the humor and the frustrations that go along with raising children in general. The first episode is currently available, a hilarious account of the family’s decision to use marijuana to offset the effects of their son’s medication. You can watch it on Amazon Prime, YouTube or Vimeo, or also link directly at siparent.com or surprisinglycomplicated.com. You can also link to their social media channels at siparent.com. The next episode, titled “Dentist, Haircut, and Waffle Embargo” is set to air in February. We can’t wait to see it!

find links mentioned here on siparent.com Click on the Community & School News tab to download or receive more information on: 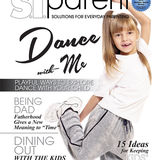