"A Taos Tale" by Lynne Robinson 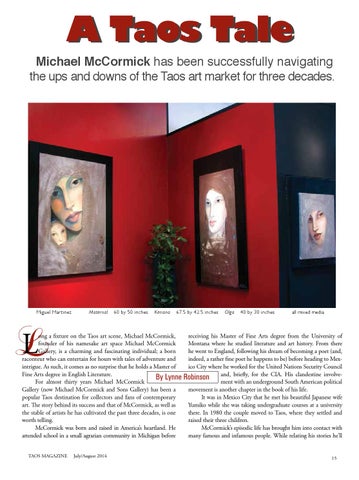 Michael McCormick has been successfully navigating the ups and downs of the Taos art market for three decades.

ong a fixture on the Taos art scene, Michael McCormick, receiving his Master of Fine Arts degree from the University of founder of his namesake art space Michael McCormick Montana where he studied literature and art history. From there Gallery, is a charming and fascinating individual; a born he went to England, following his dream of becoming a poet (and, raconteur who can entertain for hours with tales of adventure and indeed, a rather fine poet he happens to be) before heading to Mexintrigue. As such, it comes as no surprise that he holds a Master of ico City where he worked for the United Nations Security Council Fine Arts degree in English Literature. By Lynne Robinson and, briefly, for the CIA. His clandestine involveFor almost thirty years Michael McCormick ment with an underground South American political Gallery (now Michael McCormick and Sons Gallery) has been a movement is another chapter in the book of his life. popular Taos destination for collectors and fans of contemporary It was in Mexico City that he met his beautiful Japanese wife art. The story behind its success and that of McCormick, as well as Yumiko while she was taking undergraduate courses at a university the stable of artists he has cultivated the past three decades, is one there. In 1980 the couple moved to Taos, where they settled and worth telling. raised their three children. McCormick was born and raised in America’s heartland. He McCormick’s episodic life has brought him into contact with attended school in a small agrarian community in Michigan before many famous and infamous people. While relating his stories he’ll TAOS MAGAZINE

frequently drop names like Octavio Paz, W H Auden, Michael Hamburger, Gunther Grass, Dennis Hopper and Bill Clinton as if they lived next door. To some it may seem implausible, but for those who know him it’s simply the world in which he’s always travelled. In Taos, through a childhood friend, renowned artist Jack Smith, McCormick was introduced to Buddhist monk and local resident Bob Watkins; Watkins, a former actor, then introduced him to Hopper and his intimate circle of friends. He would eventually meet and befriend a long list of Taos celebrities, acquaintances that have helped him build Michael McCormick Gallery into one of the most recognized in the Southwest. Over the years McCormick has experienced many ups and downs here, both personally and professionally, including the untimely death of his and Yumiko’s son Ryoji a few summers ago. But he is nothing if not a survivor, reinventing himself over and over as the vagaries of Taos art market have dictated. And, no doubt, he will do so again when the need arises. Through it all McCormick has continued to support the town that has provided him with so much. He is an appreciated community activist and a philanthropist, giving much of his time and proceeds to local charities. He perhaps is best known as the co-founder of Child-rite, a non-profit organization that places special-needs kids in permanent and loving homes. Visitors to Michael McCormick and Sons Gallery will discover a wide-ranging collection of art, all hung salon style in large and high-ceilinged exhibition rooms. The space pulsates with an 16

undulating dance of color and light. The artists are well known: Miguel Martinez, Malcolm Furlow, Shelbee Mares and Bill Baker, among others, are all accomplished and widely collected. In addition, there are works from private collections including rare pieces by Bill Rane, Michio Takayama and R C Gorman. Collectors also will discover a group of Rembrandt etchings pulled from the Master’s own plates as part of a catalogue raisonné published in the 18th Century. Miguel Martinez is represented exclusively in Taos by McCormick Gallery, with its front room boasting an impressive selection of the native Taoseño’s legendary Madonnas. Paintings from Martinez’s newer bird series, rendered in oil pastels with larger than life faces and penetrating eyes that shine amidst brilliant plumage, dominate an adjoining space. Malcolm Furlow’s trademark Native American riffs on the Wild West, and the animals that reside there, fill another expanse. Large and small canvasses vibrate with Furlow’s daring use of color. He is a huge draw, especially during the annual Indian Market celebration when McCormick Gallery highlights the work of this renowned Native painter. Furlow’s accolades include a Silver Award from the Sorbonne in Paris and a highly coveted Gold Award from the Luxembourg Museum, also in Paris. Comanche painter Tim Nevaquaya’s work is showcased during Indian Market as well. New York-to-New Mexico transplant Bill Baker’s paintings have been shown exclusively in Taos by McCormick for many years. Baker, who works with ‘soft pastel’ on black Arches paper, has become prominently recognized over the past decade or so. His travels seeking subject matter in some of the globe’s most remote places have culminated in a collection of distinctive paintings featuring indigenous peoples, and poignantly capturing a sadly disappearing world with sensitivity and grace. The awards Baker’s paintings have garnered over the past decade are too many to recount, but in 2013 he won the Northeast National Pastel Exhibition People’s Choice Award, and this year was awarded First Place in the annual New Mexico Master’s Exhibition. The alluring paintings of Shelbee Mares also are exhibited exclusively at McCormick Gallery, though the longtime Taos resident now divides her time between Taos and Maine. Painting in her

signature style using mixed media on canvas, she adeptly captures her subject matter with a remarkable combination of movement and light. The effect is so different in its appearance that her work is a main attraction for art enthusiasts and collectors who visit the gallery. McCormick has supported up-andcoming young artists for as long the gallery’s been in existence, introducing the work of one or two annually. This year is no exception: Jen Weddle, a very talented silversmith, is the guest artist for 2014. Weddle earned a degree in Metalsmithing from Texas Tech University and then furthered her studies in Taos, attending lapidary classes. She became so infatuated with the people, culture and artistic atmosphere in Taos that following the conclusion of her workshop she returned home, packed up everything she owned and moved here. Weddle’s work is unique, and its sculptural quality blends beautifully with the works of the other artists represented by McCormick Gallery. Weddle’s jewelry will be on display during a Bill Baker exhibition (which opens July 5) as well as at the gallery’s Indian Market exhibition. Earlier this year McCormick appointed Jamie Garrison as his new curator, but his hands-on involvement will continue to make this gallery a standout in a town filled with many. “You know, I think I’m a typical Type A personality,” he says, “very driven by what excites me. The art business is terribly addicting, and you never know what’s going to happen next. I live for the magic, those moments of absolute surprise when someone will walk in with a literal masterpiece. “Just today,” he adds, with unmistakable excitement in his voice, “Bill Baker brought in the new pieces for his show, and they are so incredible… just outstanding work. You really must come in and see them,” he urges. And I shall, as will many others, inspired by not only the art, but the enthusiasm of Michael McCormick.

n exhibition of new paintings by Bill Baker will open at Michael McCormick and Sons Gallery, 106 Paseo del Pueblo Norte, on July 5 with a reception from 4 to 8pm and continue through August 24. The gallery will host an open house for its annual Indian Market show on August 23 from 4 to 8pm. The exhibit will hang throughout the summer. 575.758.1372 or 800.279.0879. mccormickgallery.com.

"A Taos Tale" by Lynne Robinson

For almost thirty years Michael McCormick Gallery (now Michael McCormick and Sons Gallery) has been a popular Taos destination for collectors and fans of contemporary art. The story behind its success and that of McCormick, as well as the stable of arti