History of Coolaney in 15 Objects 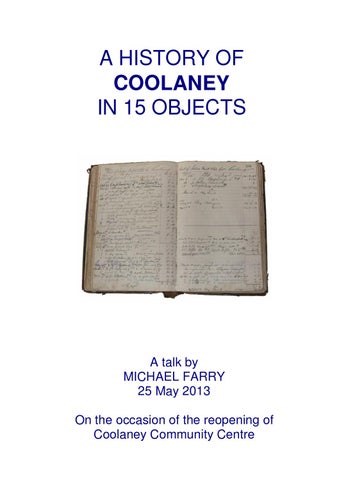 A HISTORY OF COOLANEY IN 15 OBJECTS

MICHAEL FARRY was born in Carrowloughan, Coolaney in 1947. He was educated at Rockfield N.S. and St Nathy’s College, Ballaghaderreen. He is a retired primary teacher. He published Killoran and Coolaney: A Local History in 1985 and Sligo 1914-1921: A Chronicle of Conflict in 1992. His Aftermath of Revolution: Sligo 1921-23 was published by UCD Press in 2000 and Four Courts Press published his Sligo: The Irish Revolution, 1912– 23 in 2012. His first poetry collection Asking for Directions was published by Doghouse Books in 2012. mfarry47@eircom.net

Ordnance Survey Sheet 54 â&amp;#x20AC;&amp;#x201C; Coolaney Michael Farry We spread it out one inch to the mile, one shilling, four flat colours, hills hatched in cosy browns. I watched the world turning from inside these edges, the receiving centre of its pulses dropping in by newsprint, aerial, from Antarctica, Budapest, Katanga, Boston. I remember things that never happened there, things that did. I loved the crunch of iron wheel rims on gravel roads and the intimate breath of steam trains. All halted, only here on heavy paper shod wheels turn on still unmetalled roads, heavy engines glide towards terminals, faithful, regular. But now the mist spreads, obliterates all land marks, hills, hollows, walls and boundaries, and I fold up my countryside in faded maroon covers, stow it, useless and drive slowly to the half-lit village. I park, get out, a stranger like yourself. Published in Imagination &amp; Place: Cartography (Kansas, USA, 2013)

History of Coolaney in 15 Objects 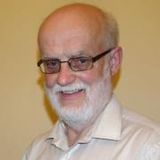