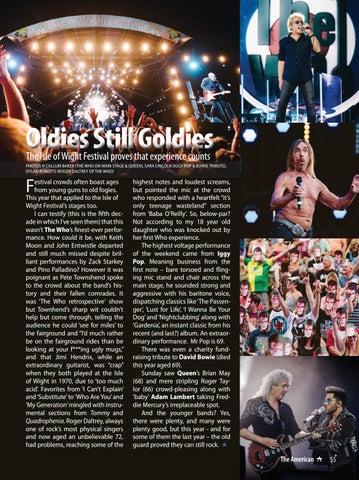 estival crowds often boast ages from young guns to old fogies. This year that applied to the Isle of Wight Festival’s stages too. I can testify (this is the fifth decade in which I’ve seen them) that this wasn’t The Who’s finest-ever performance. How could it be, with Keith Moon and John Entwistle departed and still much missed despite brilliant performances by Zack Starkey and Pino Palladino? However it was poignant as Pete Townshend spoke to the crowd about the band’s history and their fallen comrades. It was ‘The Who retrospective‘ show but Townhend’s sharp wit couldn’t help but come through, telling the audience he could ‘see for miles’ to the fairground and “I’d much rather be on the fairground rides than be looking at your f***ing ugly mugs,” and that Jimi Hendrix, while an extraordinary guitarist, was “crap” when they both played at the Isle of Wight in 1970, due to ‘too much acid’. Favorites from ‘I Can’t Explain’ and ‘Substitute’ to ‘Who Are You’ and ‘My Generation’ mingled with instrumental sections from Tommy and Quadrophenia. Roger Daltrey, always one of rock’s most physical singers and now aged an unbelievable 72, had problems, reaching some of the

highest notes and loudest screams, but pointed the mic at the crowd who responded with a heartfelt “it’s only teenage wasteland” section from ‘Baba O’Reilly’. So, below-par? Not according to my 18 year old daughter who was knocked out by her first Who experience. The highest voltage performance of the weekend came from Iggy Pop. Meaning business from the first note – bare torsoed and flinging mic stand and chair across the main stage, he sounded strong and aggressive with his baritone voice, dispatching classics like ‘The Passenger’, ‘Lust for Life’, ‘I Wanna Be Your Dog’ and ‘Nightclubbing’ along with ‘Gardenia’, an instant classic from his recent (and last?) album. An extraordinary performance. Mr Pop is 69. There was even a charity fundraising tribute to David Bowie (died this year aged 69). Sunday saw Queen’s Brian May (68) and mere stripling Roger Taylor (66) crowd-pleasing along with ‘baby’ Adam Lambert taking Freddie Mercury’s irreplaceable spot. And the younger bands? Yes, there were plenty, and many were plenty good, but this year - and for some of them the last year – the old guard proved they can still rock.