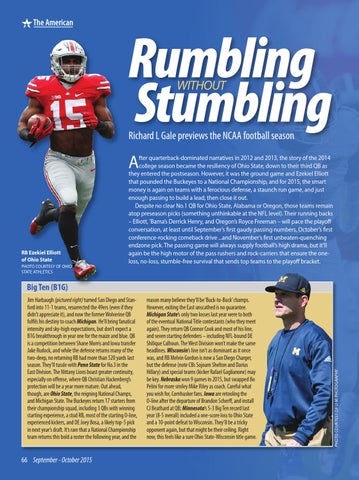 fter quarterback-dominated narratives in 2012 and 2013, the story of the 2014 college season became the resiliency of Ohio State, down to their third QB as they entered the postseason. However, it was the ground game and Ezekiel Elliott that pounded the Buckeyes to a National Championship, and for 2015, the smart money is again on teams with a ferocious defense, a staunch run game, and just enough passing to build a lead, then close it out. Despite no clear No.1 QB for Ohio State, Alabama or Oregon, those teams remain atop preseason picks (something unthinkable at the NFL level). Their running backs – Elliott, ’Bama’s Derrick Henry, and Oregon’s Royce Freeman – will pace the playoff conversation, at least until September’s first gaudy passing numbers, October’s first conference-rocking comeback drive ...and November’s first unbeaten-quenching endzone pick. The passing game will always supply football’s high drama, but it’ll again be the high motor of the pass rushers and rock-carriers that ensure the oneloss, no-loss, stumble-free survival that sends top teams to the playoff bracket.

Jim Harbaugh (pictured right) turned San Diego and Stanford into 11-1 teams, resurrected the 49ers (even if they didn’t appreciate it), and now the former Wolverine QB fulfils his destiny to coach Michigan. He’ll bring fanatical intensity and sky-high expectations, but don’t expect a B1G breakthrough in year one for the maize and blue. QB is a competition between Shane Morris and Iowa transfer Jake Rudock, and while the defense returns many of the two-deep, no returning RB had more than 520 yards last season. They’ll tussle with Penn State for No.3 in the East Division. The Nittany Lions boast greater continuity, especially on offense, where QB Christian Hackenberg’s protection will be a year more mature. Out ahead, though, are Ohio State, the reigning National Champs, and Michigan State. The Buckeyes return 17 starters from their championship squad, including 3 QBs with winning starting experience, a stud RB, most of the starting O-line, experienced kickers, and DE Joey Bosa, a likely top-5 pick in next year’s draft. It’s rare that a National Championship team returns this bold a roster the following year, and the

reason many believe they’ll be ‘Buck-to-Buck’ champs. However, exiting the East unscathed is no guarantee. Michigan State’s only two losses last year were to both of the eventual National Title contestants (who they meet again). They return QB Connor Cook and most of his line, and seven starting defenders – including NFL-bound DE Shilique Calhoun. The West Division won’t make the same headlines. Wisconsin’s line isn’t as dominant as it once was, and RB Melvin Gordon is now a San Diego Charger, but the defense (note CBs Sojourn Shelton and Darius Hillary) and special teams (kicker Rafael Gaglianone) may be key. Nebraska won 9 games in 2015, but swapped Bo Pelini for more smiley Mike Riley as coach. Careful what you wish for, Cornhusker fans. Iowa are retooling the O-line after the departure of Brandon Scherff, and install CJ Beathard at QB; Minnesota’s 5-3 Big Ten record last year (8-5 overall) included a one-score loss to Ohio State and a 10-point defeat to Wisconsin. They’ll be a tricky opponent again, but that might be their ceiling. Right now, this feels like a sure Ohio State-Wisconsin title game.