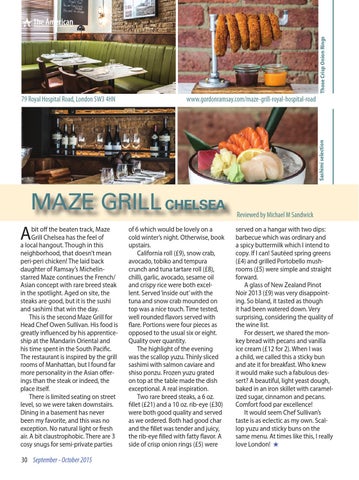 bit off the beaten track, Maze Grill Chelsea has the feel of a local hangout. Though in this neighborhood, that doesn’t mean peri-peri chicken! The laid back daughter of Ramsay’s Michelinstarred Maze continues the French/ Asian concept with rare breed steak in the spotlight. Aged on site, the steaks are good, but it is the sushi and sashimi that win the day. This is the second Maze Grill for Head Chef Owen Sullivan. His food is greatly influenced by his apprenticeship at the Mandarin Oriental and his time spent in the South Pacific. The restaurant is inspired by the grill rooms of Manhattan, but I found far more personality in the Asian offerings than the steak or indeed, the place itself. There is limited seating on street level, so we were taken downstairs. Dining in a basement has never been my favorite, and this was no exception. No natural light or fresh air. A bit claustrophobic. There are 3 cosy snugs for semi-private parties

of 6 which would be lovely on a cold winter’s night. Otherwise, book upstairs. California roll (£9), snow crab, avocado, tobiko and tempura crunch and tuna tartare roll (£8), chilli, garlic, avocado, sesame oil and crispy rice were both excellent. Served ‘inside out’ with the tuna and snow crab mounded on top was a nice touch. Time tested, well rounded flavors served with flare. Portions were four pieces as opposed to the usual six or eight. Quality over quantity. The highlight of the evening was the scallop yuzu. Thinly sliced sashimi with salmon caviare and shiso ponzu. Frozen yuzu grated on top at the table made the dish exceptional. A real inspiration. Two rare breed steaks, a 6 oz. fillet (£21) and a 10 oz. rib-eye (£30) were both good quality and served as we ordered. Both had good char and the fillet was tender and juicy, the rib-eye filled with fatty flavor. A side of crisp onion rings (£5) were

Reviewed by Michael M Sandwick served on a hangar with two dips: barbecue which was ordinary and a spicy buttermilk which I intend to copy. If I can! Sautéed spring greens (£4) and grilled Portobello mushrooms (£5) were simple and straight forward. A glass of New Zealand Pinot Noir 2013 (£9) was very disappointing. So bland, it tasted as though it had been watered down. Very surprising, considering the quality of the wine list. For dessert, we shared the monkey bread with pecans and vanilla ice cream (£12 for 2). When I was a child, we called this a sticky bun and ate it for breakfast. Who knew it would make such a fabulous dessert? A beautiful, light yeast dough, baked in an iron skillet with caramelized sugar, cinnamon and pecans. Comfort food par excellence! It would seem Chef Sullivan’s taste is as eclectic as my own. Scallop yuzu and sticky buns on the same menu. At times like this, I really love London!