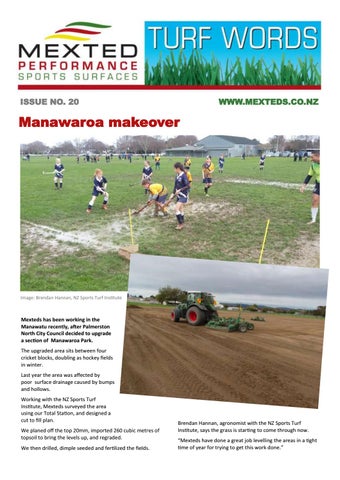 Mexteds has been working in the Manawatu recently, after Palmerston North City Council decided to upgrade a section of Manawaroa Park. The upgraded area sits between four cricket blocks, doubling as hockey fields in winter. Last year the area was affected by poor surface drainage caused by bumps and hollows. Working with the NZ Sports Turf Institute, Mexteds surveyed the area using our Total Station, and designed a cut to fill plan. We planed off the top 20mm, imported 260 cubic metres of topsoil to bring the levels up, and regraded. We then drilled, dimple seeded and fertilized the fields.

Brendan Hannan, agronomist with the NZ Sports Turf Institute, says the grass is starting to come through now. â&#x20AC;&#x153;Mexteds have done a great job levelling the areas in a tight time of year for trying to get this work done.â&#x20AC;?

A brief trip to New Plymouth is a regular fixture on Mexteds’ autumn calendar, where we carry out renovation work at New Plymouth District Council’s five club cricket grounds and the 3,500 capacity Pukekura Park – once used as the film location for The Last Samurai, where it masqueraded as a Japanese army camp. Our operations manager, Chris Parkinson, verticut and grooved the Pukekura wicket block, before verticutting and sweeping the outfield. Head groundsman for NPDC, Craig Hitchock, says the work went well. “We come along and resow the blocks once it’s done.”

Blockhouse Bay gravel banding solution Gravel banding was chosen over sand-slitting as the ideal secondary drainage solution for Auckland Council’s Blockhouse Bay Recreational Reserve, as the former tip site is subject to restrictions on the removal of fill. Gravel banding is based on an extrusion system, where the trenches are backfilled with fine gravel or sand in a single operation. Mexteds were subcontractors to Turf & Drainage, who rebuilt the two sports fields at the end of last year and installed primary drains. The new gravel bands, which consist of 25mm slits at 400mm centres and a depth of 300mm, will help water percolate into the primary drains. Mexteds’ general manager, Cameron Mexted, says “gravel banding is drain today, play tomorrow technology with no down time – a real bonus for high use fields.” Blockhouse Bay park is used by Bay Roskill Sports Club, home of The Vikings rugby league team.

Irrigation — from design to installation

Above-ground temporary irrigation at Wellington International Airport Mexteds’ in-house expertise has been boosted as we welcome irrigation expert Rob Willis to our operations team. We are now able to offer a full sports field irrigation service, from consultation through to design and installation. We build irrigation systems according to clients’ individual requirements, taking account of factors such as water source, flow rates and ground conditions, as well as budgets. Permanent irrigation can go hand-in-hand with the installation of drainage, with pipe work laid in the same trenches.

Our clients range from councils through to schools. Mexteds recently installed 400 metres of irrigation at Kāpiti College, as part of an overall upgrade of its soccer field, which we also reshaped, levelled and grassed. Above-ground temporary irrigation is another option to help promote grass strike and establishment in newly-sown areas. Temporary irrigation was used over 2.5 hectares at Wellington International Airport this autumn, where we sowed Avanex bird-resistant grass alongside the runway, part of a staged project to reduce the risk of bird-strike.

Porirua Park swale drain upgrade Home of Northern United Rugby Club, Porirua #2 park is used intensively for training and competition for juniors through to premiere league. Mexteds was recently called in to help improve the experience for players and spectators by replacing open drains at both ends of the field with an upgraded drainage system. “Behind the dead ball line was an open drain, so when anyone kicked a ball for goal the ball ended up in the muck in the open drain,” says John Callahan, Porirua City Council’s leisure assets infrastructure officer. “There is nothing worse than kids chasing a ball in an open drain and going up to their knees in mud and water.” Mexteds designed the new drainage system, installing sumps, stormwater connections and novacoil, before back-filling and topsoiling to form a new shallow swale drain. “The whole space is now grassed, clean, dry and useable,” says Callahan. “It has given us a better-quality competition and training area.”

Wakefield Park code change leads to upgrade Softball has replaced cricket as the summer sport played at Wakefield Park in Wellington, so Mexteds was brought in by Wellington City Council to remove the three redundant cricket blocks and upgrade the entire park. We surveyed and designed the contours, drainage and irrigation systems, before carrying out the renovations to a tight timeframe to ensure the two playing fields were ready in time for winter soccer. Mexteds installed over 3,000 metres of lateral drains, feeding into new collectors, and 1,200 metres of permanent irrigation. We then spread and sowed topsoil on low areas of both fields and applied a dust-suppressant polymer to the drain lines and topsoiled areas, to avoid the risk of dust affecting nearby households. WCC Project Manager, Peter Hemsley, says “Wakefield is now back in play, fully completed, and is good as gold.”

Hataitai Park irrigation and drainage boost Installing new drainage and irrigation in time for a softball tournament fixture meant swift work for Mexteds at Hataitai Park in Wellington. Over three weeks Mexteds installed 2,000 metres of primary drainage and over 1,000 metres of irrigation throughout the park, which has a softball diamond at either end of a rugby pitch. “It was quite a simple job,” says WCC Project Manager, Peter Hemsley. “The complexities were about the timeframe more than anything.” To get the area up and running in time for the softball tournament, Mexteds turfed the drainage lines in the outfield, while sowing the rest. “The field’s playing well at the moment,” says Hemsley. “New drainage and irrigation always helps, so you are going into the winter season with green grass.”