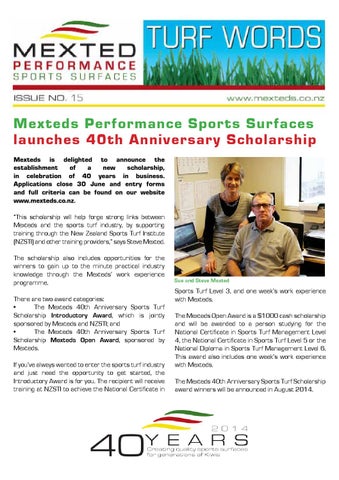 Mexteds Performance Sports Surfaces launches 40th Anniversary Scholarship Mexteds is delighted to announce the establishment of a new scholarship, in celebration of 40 years in business. Applications close 30 June and entry forms and full criteria can be found on our website www.mexteds.co.nz. “This scholarship will help forge strong links between Mexteds and the sports turf industry, by supporting training through the New Zealand Sports Turf Institute (NZSTI) and other training providers,” says Steve Mexted. The scholarship also includes opportunities for the winners to gain up to the minute practical industry knowledge through the Mexteds’ work experience programme. There are two award categories: • The Mexteds 40th Anniversary Sports Turf Scholarship Introductory Award, which is jointly sponsored by Mexteds and NZSTI; and • The Mexteds 40th Anniversary Sports Turf Scholarship Mexteds Open Award, sponsored by Mexteds. If you’ve always wanted to enter the sports turf industry and just need the opportunity to get started, the Introductory Award is for you. The recipient will receive training at NZSTI to achieve the National Certificate in

Mexteds moving forward 2014 is a year of celebration at Mexteds, as we mark the significant milestone of over 40 years in business. And it’s fair to say, when he started the company in 1974, our founder Wilf Mexted wouldn’t have foreseen his general contracting business growing into the highly specialised sports turf company we have become today.

on the Rugby World Cup campaign in 2011 and many years experience in the areas of sport and recreation programming and project management in the local and central government sectors. At Mexteds, Ken’s focus is on staff training, developing our brand and building on our strong reputation serving the industry and a wide range of customers.

Our business has never stood still and recently Steve and Sue Mexted put in place a new management structure to take us forward in good heart into 2014 and beyond.

Meanwhile, some things haven’t changed. As our company continues to grow we are still family-owned and have the same core values – we pride ourselves on being family-friendly, open, honest, accountable, dedicated and professional.

Ken Bailey joined our company at the end of 2013 in the newly-created role of General Manager. This was another milestone for our company. Ken brings a wealth of experience to the position, including work

Please contact Ken Bailey to discuss how Mexteds can help you make your next sports turf project an outstanding success. E: ken@mexteds.co.nz. P: 04 233 0703.

Synthetic treatment at Adventure Park A one-in-fifty-year storm threw up an extra challenge as Mexteds began a drainage installation job at Adventure Park in Whitby, with Porirua City Council’s weather station recording 260mm of rain in one week. Perseverence paid off, so that we were able to meet the client’s timeframes, installing two collector drains and nearly 4,000 metres of lateral drains over the two hectare park, which includes two sports fields and an artificial cricket wicket. “It was a full drainage upgrade, as the park wasn’t performing very well, with too many ground closures and restrictions,” explains Porirua City Council’s Leisure Assets Infrastructure Officer, John Callahan. Mexteds’ initial contour survey of the park revealed that the swale drains around the perimeter also needed to be re-constructed, with the park sited well below the level of the road. The construction work uncovered an old drainage system that was actually making ground conditions worse. “There’s nothing like digging up the ground,” says Callahan. “The old drainage system was trapping and holding water in the ground, pooling water in the park and making it wetter.”

“Mexteds did a good job and everyone should benefit, from junior kids that train on there after school to more competitive games and casual users of the park, who will find it will be a lot more user-friendly in the winter.” To complete the renovation work, Mexteds re-laid turf over the main drainage lines, and took the old material off the top of the artificial cricket wicket, before boxing it for the new concrete pour and the astro-turf installation.

School wicket block makeovers Wicket blocks at Hutt International Boys School (HIBS) and Onslow College have been given a new lease of life thanks to a programme of funding support from Cricket Wellington. Cricket Wellington is aware of the expense schools face to upgrade their wicket blocks, and each year focuses on supporting a couple of schools competing in the premier grade to upgrade their wickets. At both HIBS and Onslow College the entire blocks were re-laid using Patamahoe clay, and at HIBS a new irrigation system was installed at the same time. HIBS’ deputy principal, Craig Johnson, says a higher standard of school cricket is the aim. The HIBS block was 20 years old and not playing as well as it used to. As part of the work at Onslow College (pictured), Mexteds moved the wicket block to make the most of an awkward site, while the existing fourpitch block was reduced to three. “We were pretty stoked that it went really well and the block is looking great,” says Onslow College principal, Peter Leggat. “There is no-one else in Wellington that has the expertise that Mexteds has.”

Nairnville Park field upgrade Wellington City Council’s decision to fund the upgrade of three sportsfields at Nairnville Park, Khandallah has seen Mexteds install lateral drainage to overcome poor, muddy winter conditions, as well as irrigation to take care of summer dry weather. Peter Hemsley, WCC’s sports field project manager, says the playing fields could become muddy and unplayable in winter, when it is used by the Onslow Football Club and Old Boys United, as well as for many children’s games.

Peter is also expecting much improved conditions in the summer, when it is used as a senior cricket venue. Mexteds is installing concrete dish channels around the edges of the park to stop runoff from the surrounding terraces affecting the playing fields. The first job for Mexteds has been to erect perimeter fencing to meet health and safety requirements, as the park is heavily used. Fencing: Mexteds is able to supply portable fencing to other contractors on request - P: (04) 233 0703

Subsoil and swale drains for Porirua The installation of new subsoil drainage at Porirua #2 rugby park has ensured training sessions will be able to go ahead this winter. Mexteds’ Operations Manager, Chris Parkinson, says the old drainage system required upgrading, and the irrigation system extending. Mexteds reinstated swale drains to new levels, making a shallow mowable drain complete with novacoil drainage. On the field, 2,640 metres of primary lateral drains were installed leading to new collectors, followed by the installation of additional irrigation. As the rugby season gets underway, the drainage lines have grown in, and the field is now being used for practice sessions.

Undercover Bosses ... It was all hands to the pump during the Porirua #2 Park upgrade, which fell during a busy spell for Mexteds. Pictured here are (left) Paul Pinfold, our Contracts Manager, and General Manager, Ken Bailey. “Back to work boys!”

Wet conditions at the undrained William Jones Park often made for difficult playing conditions for the Wainuiomata Rugby Club, which calls the park home. “It is the number one rugby field for the club, but the heavy clay soil meant it was in definite need of some drainage,” says Chris Parkinson, Mexteds’ Operations Manager. “There were no drains in there at all.”

Hutt City Council contracted Mexteds to install a new subsoil network, followed by a sand top dressing. The grass is now re-establishing and as autumn rains soften the ground, Mexteds will be installing secondary gravel bands to help channel water from the surface to the primary drains as part of the contract.

Welcoming our new staff Over the last few months we’ve added some new faces to the Mexteds’ team. Here’s introducing: Ken Bailey, our new General Manager, who joined the team in late 2013. Ken previously worked for Sport New Zealand, and before that spent 23 years with Wellington City Council, where he worked on the Rugby World Cup 2011 campaign and in sports and recreation programming and project management roles. Ken says he is enjoying the team culture, quality and standards at Mexteds, as well as the opportunity to be part of a business with values and goals which align to his. Peter Mortensen has approached his new career with Mexteds from an unusual angle. His last job was as a bread baker, working the night shift, which followed 26 years in farming. But his love of tractors and of sport – he played cricket for 15 years and now enjoys watching from the sidelines – means his role at Mexteds is the perfect fit. Peter says “I am finding the work very enjoyable, the different types of work and getting to know the streets of Wellington, and where all the parks are. I value the responsibility and respect that I am given by management and everyone at Mexteds.”

Luke Nilsson also brings a strong background in the agriculture and horticulture sectors to our business. His most recent position was working amongst the grape vines for Pernod Ricard, formerly Montana Wines, in the Hawke’s Bay, where his mechanical abilities and strong work ethic saw him contributing to the production of a very successful regional winery.

Marcus Duell joined the Mexteds team in 2013, after working as a 2IC greenkeeper at Wainuiomata Golf Club for the previous five years. With the National Certificate in Sports Turf Management, Level 4, under his belt, Marcus was keen to try new things and sees the job at Mexteds as a great way to improve his skill set. “I had heard through a lot of people that Mexteds was a great company with a good reputation. I’m loving the fact that I turn up to work and not knowing what the day brings, always new jobs and seeing the unique machinery that the company uses. The team environment is always a good laugh but the work gets done and to a very high standard.”

Concorde 2220 vertidrain option Aerating soils, or deep shatter tining, is now simpler with Mexteds new Concorde 2220 machine, which is designed for large compacted areas. Solid tines of up to 24mm in diameter are driven into the ground to a depth of 400mm, before heaving the soil to break up any compaction. This leaves a pore, or space, in the soil profile, allowing water to drain and air to move freely to the roots of the plants, improving growth. The Concorde 2220 is matched to our Fendt tractors, and the 2.08 metre width and ability to work at fast speed, even in hard soils, will mean greater efficiency for our clients.

25 years, Not Out! We pimped our staffroom with balloons, had a special celebratory cake, speeches and plenty of laughter to mark Chris Parkinson’s 25 year anniversary working for Mexteds recently. Following a diversionary tactic by Ken Bailey, Chris walked in to the dawn surprise party to be greeted by ... himself! All the staff were wearing ‘Chris Parkinson’ masks. Steve and Sue Mexted thanked Chris for his key contribution to the business and gave him a gift in appreciation. “It’s been a critical part of where we are now,” said Steve.