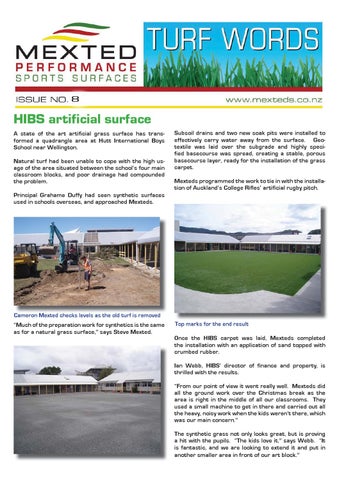 HIBS artificial surface A state of the art artificial grass surface has transformed a quadrangle area at Hutt International Boys School near Wellington. Natural turf had been unable to cope with the high usage of the area situated between the school’s four main classroom blocks, and poor drainage had compounded the problem.

Subsoil drains and two new soak pits were installed to effectively carry water away from the surface. Geotextile was laid over the subgrade and highly specified basecourse was spread, creating a stable, porous basecourse layer, ready for the installation of the grass carpet. Mexteds programmed the work to tie in with the installation of Auckland’s College Rifles’ artificial rugby pitch.

Cameron Mexted checks levels as the old turf is removed “Much of the preparation work for synthetics is the same as for a natural grass surface,” says Steve Mexted.

Top marks for the end result Once the HIBS carpet was laid, Mexteds completed the installation with an application of sand topped with crumbed rubber. Ian Webb, HIBS’ director of finance and property, is thrilled with the results. “From our point of view it went really well. Mexteds did all the ground work over the Christmas break as the area is right in the middle of all our classrooms. They used a small machine to get in there and carried out all the heavy, noisy work when the kids weren’t there, which was our main concern.” The synthetic grass not only looks great, but is proving a hit with the pupils. “The kids love it,” says Webb. “It is fantastic, and we are looking to extend it and put in another smaller area in front of our art block.”

Artificial winter cover improves safety Safety concerns for soccer and rugby players prompted Porirua City Council to look for an innovative solution to the problem of having a concrete artificial cricket wicket sited in the middle of Endeavour Park, between its winter code playing fields. “The concrete wicket was just half a metre away from two playing fields and there was a danger for players slipping and sliding with their sprigs,” says Mexteds’ Operations Manager, Chris Parkinson.

Mexteds were called in to create a winter cover for the cricket wicket, using a synthetic surface, which can be rolled up and put away for the summer, then relaid the following winter. After laying and pinning the artificial turf a rubber crumb was spread through it to make a soft, springy mat. Porirua City Council Parks Supervisor, John Callahan says the winter cover has been a great success. “People tended to gath“Pe er there and watch the ga games, and teams tend to put pu their gear on the cricket wicket. In winter it was slimey, hard and slippery s and was a health and a safety hazard.” He says the winter cover has made a big difference. The surface is now more ‘user friendly’ and will have the added bonus of protecting the artificial cricket wicket from rugby and soccer boots.

This is something that hasn’t been done in Wellington before, and it has worked well, says Chris Parkinson.

Decompaction success Councils are experiencing the benefits of Mexteds TreMor rotary decompactor, with the machine being used extensively around the greater Wellington region. Kapiti Coast District Council has put Mexteds TreMor over all of its 22 parks from Paekakarikiki to Otaki. Most of the parks are sand based but suffered from a compacted top layer of around 200mm which was closing up and preventing water from draining through. The TreMor sliced through to a depth of 300mm which connected the surface to the subsoil. “It’s an excellent machine,” says Chris Heenan, KCDS’s Parks and Recreation Supervisor. “Our surfaces were pretty closed, although we verti-drain frequently. The TreMor got down much deeper. One of the parks was constantly under water last year, but we haven’t had any problems this year.” Decompaction also promotes better root depth and the TreMor’s very even ‘heave’ and the lack of soil disturbance ensures rocks and stones are not brought to the surface. Rotary decompaction is Mexteds’ first choice for high

The TreMor in action at Wellington’s Westpac Stadium performance and natural sports playing surfaces as well as golf courses and race courses, a key advantage being that your sports surface can be used immediately on completion. Mexteds is now taking this technology further afield. Such flexibility to travel is made all the more easy now that we have our own transporter.

Gravel banding in winter Robotic TotalStation Despite experiencing one of the coldest and wettest put to the test winters on record, Mexteds is well positioned to work through these challenging months with the right machinery and the expertise to get the job done. One job in particular that lends itself to winter conditions is gravel banding - a cost-effective method of installing secondary drainage, allowing excess surface water to drain into the primary drainage network. Based on an extrusion system, the optimum time for gravel banding is when ground conditions are soft. Using turf tyres the machine has minimum impact as it creates 25mm wide slits at 400mm centres and a depth of 300mm. The slits are backfilled with fine gravel or sand in a single operation. Mexteds is able to apply a sand topping layer to the gravel if required.

Mexteds faced a challenge in the design and build of Te Rauparaha Park in Porirua, that saw its Trimble robotic TotalStation put through its paces. The redesign of the park called for playing surfaces at two different levels with a swale drain running through this middle. Mexteds did an initial survey and then loaded data supplied by Porirua City Council to pinpoint existing services running through the park. Cameron Mexted then used TotalStation to design the drainage system and levels and contours of the finished surface. The design ensured that the best use was made of onsite material to avoid carting soil or fill on or offsite.

We have also modified our gravel bander to give the additional advantage of rotary decompaction simultaneously with gravel banding, to promote strong, healthy turf that resists stress, improves the uptake of fertiliser and requires less frequent watering.

Cameron Mexted surveying with the TotalStation Wellington City Council used gravel banding extensively in May at Lyndhurst Park, Helston Park and Ian Galloway Park with excellent results. “It has certainly made a big improvement in the quality of the surface and the drainage, and it means we can play more games on the weekend, even with the wet weather we have been having,” says Sports Field Manager, Trevor Jackson. Gravel banding is also ideal because it requires no ‘down time’. “There is no soil disturbance and teams were continuing to play and practice every night when we were gravel banding at Lyndhurst, Helston and Ian Galloway,” says Operations Manager Chris Parkinson. “The time is right now to undertake gravel banding,” says Steve Mexted. We are able to take this technology to other parts of the country so they can have the same benefits as we’ve seen in Wellington.”

Once work was underway Mexteds carried out further surveys to record trenching and irrigation data to enable easy location at a future date, and on completion produced asbuilts for the Council. Porirua City Council Parks Supervisor, John Callahan says the project came off really well. “The resulting maps that I have are awesome, they are so accurate. Now I can find anything I want on the park. The benefit of having the levels and everything that is in the park - all the services and sprinkler heads - on that GPS map is awesome. The Te Rauparaha park redesign for Porirua City Council is just one around 50 jobs that Mexteds has undertaken where the TotalStation has proved invaluable. “We use the gear on anything from tip sites to cemeteries to the Basin Reserve,” says Cameron. “Basically anything you want plotted on a map or plan we can do.”

Mexteds has recently added a transporter to its fleet, making it more cost effective for us to travel further afield to undertake work outside of Wellington. Wherever you are based, please call us when planning your next project and we will be pleased to discuss how we can assist.

Mexteds welcomes Daniel Montgomery - known as “Monty” - to our team. Monty joined Mexteds in January as a full time workshop mechanic, keeping our plant and machinery in tip top order. Prior to joining Mexteds, Monty worked in the automotive industry as a mechanic for Rutherford and Bond Toyota for five years. He says he is enjoying the extension of having such a wide range of equipment and machinery to maintain in Mexteds’ workshop, “There is ever-changing work. It’s a good workshop, and I’m enjoying the variety and the people.”

Interested in joining the Mexted Team ? We have a busy work load ahead with spring arriving and summer / autumn projects soon to be underway. If you are interested in what we do and would like to know more about working for us then please give us a call. We are always on the look out for motivated keen people who share the same work ethics and passion in providing quality work skills and service to our customers.