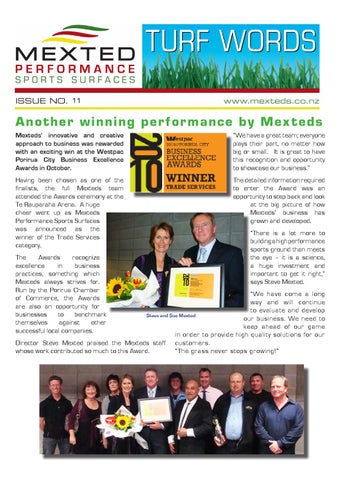 “We have a great team; everyone plays their part, no matter how big or small. It is great to have this recognition and opportunity to showcase our business.”

Having been chosen as one of the finalists, the full Mexteds team attended the Awards ceremony at the Te Rauparaha Arena. A huge cheer went up as Mexteds Performance Sports Surfaces was announced as the winner of the Trade Services category.

The detailed information required to enter the Award was an opportunity to step back and look at the big picture of how Mexteds’ business has grown and developed.

The Awards recognize excellence in business practices, something which Mexteds always strives for. Run by the Porirua Chamber of Commerce, the Awards are also an opportunity for businesses to benchmark themselves against other successful local companies.

“There is a lot more to building a high performance sports ground than meets the eye – it is a science, a huge investment and important to get it right,” says Steve Mexted.

“We have come a long way and will continue to evaluate and develop Steve and Sue Mexted our business. We need to keep ahead of our game in order to provide high quality solutions for our Director Steve Mexted praised the Mexteds staff customers. “The grass never stops growing!” whose work contributed so much to this Award.

Mexteds recently added a fourth Fendt tractor and a second turf undersower to meet expanding demand and the increasingly shorter renovation periods between code changes in district councils work programmes. The new tractor complements Mexteds’ existing fleet of Fendt 409, 410 and 411 tractors. “We will be able to complete the work more quickly and keep the councils happy,” says Chris Parkinson, Mexteds’ Operations Manager. Chris Parkinson says the latest addition has improved cab suspension, a smoother driving system and hydraulics that are operated by joy stick on the hand piece on the arm rest. It is also built to European standards in terms of emissions, and is more fuel efficient. Mexteds favours the Fendts which offer a stepless transmission that can move at very low speeds, making them ideal for trenching work. Another strength is the good manoeuvrability when working in tight areas. “We’ll probably have these Fendt tractors for at least 12,000 hours. Three of them have front linkages and two of them have front linkage with front PTO. One has the loader,” says Chris Parkinson. “The 410 and the two 411s are mainly used for trenching, as they are higher horsepower. One of the 411s is also used for loader work and undersowing, along with the 409.

Newtown Park - The race is on! With the athletics season already underway, Mexteds had the extra challenge of ensuring there was minimum disruption for schools and athletics clubs when they installed over 1600 metres of subsoil drainage at Newtown #1 Park recently. The field is predominantly used for high level football and is home to Team Wellington Soccer, which represents the capital in the New Zealand Football Championship. The park will also be used as a training venue for the Rugby World Cup next year. Wendy Henderson, Operations/Contracts Manager for Wellington City Council says the decision to replace the old 1970s drainage system in the park came off the back of a very wet winter, and a report from Rugby World Cup organizers that said the drainage was inadequate.

The park is due to have a complete renewal in another 18 months time, but the Council couldn’t afford to go through another winter season without it performing. Wendy Henderson says she was really pleased with Mexteds’ work, which was completed in just four days. “The athletics season had not long kicked off and schools were also using the facilities. “Mexteds worked in with people still using the facility as best they could and I think the pleasing thing was Mexteds were able to accommodate that; the timeframe of the job was turned around pretty quickly, so we were pretty pleased with that.”

South Island sojourn Five of the Mexteds’ staff members, along with two tractors, a dumper, loader and trailer are currently in the South Island completing three weeks’ work for the Dunedin and Nelson City Councils. Dunedin’s university oval is being upgraded to international test standard with realignment of the ground and moving of the old art gallery building to give room to extend the boundaries. Mexteds staff have just completed the installation of 1200 metres of primary subsoil drainage and 14 kilometres of sand slit secondary drainage for Delta, main contractors to the Dunedin City Council, before forming a sand carpet on the top. On the way back to Wellington the team are revisiting Saxton Park in Nelson where they will install two kilometres of subsoil drains in the #1 soccer field, followed by gravel banding secondary drainage. It’s familiar territory: Mexteds has previously installed a similar system at the cricket oval and soccer field inside the athletics track at Saxton Park.

Kilbirnie Park upgrade During August and September Mexteds installed 3,000 metres of primary drainage over four fields at Kilbirnie Park which are used for rugby, soccer and cricket matches. Wellington City Council made the decision to upgrade the drainage at the end of a wet winter season when both the #1 rugby field and the soccer field at the park failed to perform. Operations/Contracts Manager, Wendy Henderson, says it was decided to pull forward some funding to cater for the additional drainage work there as well as undertaking secondary gravel banding and a sand application over the coming weeks.

Welcome to our new staff Clay shed boosts production Engineer Clayton Tume is enjoying the challenge of working on the specialized vehicles, equipment and machinery used in the sports turf industry, after several years running his own contracting business. He’s also enjoying the autonomous working environment in the Mexteds’ workshop, organizing his own jobs, materials and equipment and getting on with the work once the rest of the staff are offsight. Its quite a change from the big crews he’s worked with in the past, including a team of 200 engineers working on the synfuel plant in New Plymouth.

Wet weather won’t stop production now that Mexteds has leased a large covered space in Linden which will be used for processing wicket clays. The former pipe factory is the perfect location for storing and processing the clay ready for Spring renovation work. It is configured so that material can be tipped into the building, where it can be stockpiled before processing with the Allu and screener operating inside.

After 12 years in the golf course industry, most recently at Cape Kidnappers in the Hawke’s Bay, Ryan Trembarth has swapped the company of graceful gannets at the nearby bird colony for the bright lights of Wellington. As a machine operator and tractor driver, Ryan is already enjoying the new challenges and equipment involved in the wider sports turf industry, as well as the opportunity to work in different locations. This month he is working away with the Mexteds team in both Dunedin and Nelson, which he’s been particularly looking forward to as he’s never been to the South Island before. Richard Newman also joined Mexteds three months ago, having worked in both gas and telecommunications trenching, and as a golf course greenkeeper at Judgeford for several years. Richard says he is enjoying the variety and also the good rapport Mexteds enjoys with clients. “Clients recognize that we do make a difference to people’s leisure time and sports.” Richard Newman (left) and Ryan Trembarth

In his free time Richard enjoys playing golf himself and is a keen runner, participating in the Wellington Scottish club’s harrier events.

The Mexteds team wish you a Merry Christmas, safe holidays and a prosperous 2011. Thank you for your support this year, and we look forward to keeping in touch!