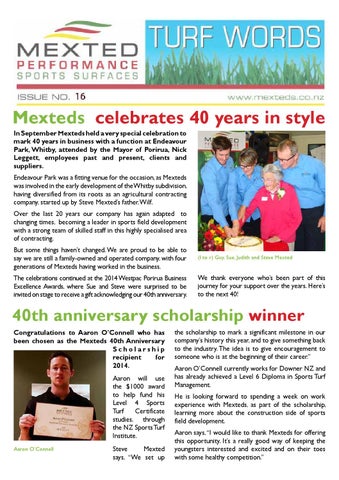 Mexteds celebrates 40 years in style In September Mexteds held a very special celebration to mark 40 years in business with a function at Endeavour Park, Whitby, attended by the Mayor of Porirua, Nick Leggett, employees past and present, clients and suppliers.

Endeavour Park was a fitting venue for the occasion, as Mexteds was involved in the early development of the Whitby subdivision, having diversified from its roots as an agricultural contracting company, started up by Steve Mexted’s father, Wilf. Over the last 20 years our company has again adapted to changing times, becoming a leader in sports field development with a strong team of skilled staff in this highly specialised area of contracting. But some things haven’t changed. We are proud to be able to say we are still a family-owned and operated company, with four generations of Mexteds having worked in the business.

The celebrations continued at the 2014 Westpac Porirua Business Excellence Awards, where Sue and Steve were surprised to be invited on stage to receive a gift acknowledging our 40th anniversary.

We thank everyone who’s been part of this journey for your support over the years. Here’s to the next 40!

Steve Mexted says, “We set up

the scholarship to mark a significant milestone in our company’s history this year, and to give something back to the industry. The idea is to give encouragement to someone who is at the beginning of their career.” Aaron O’Connell currently works for Downer NZ and has already achieved a Level 6 Diploma in Sports Turf Management. He is looking forward to spending a week on work experience with Mexteds, as part of the scholarship, learning more about the construction side of sports field development. Aaron says, “I would like to thank Mexteds for offering this opportunity. It’s a really good way of keeping the youngsters interested and excited and on their toes with some healthy competition.”

Park upgrade ahead of World Cup Mexteds tapped into past experience working at the Basin Reserve and Hagley Park to successfully manage the upgrade of the drainage at McLean Park, Napier, in preparation for the Cricket World Cup 2015.

Andrew White, Napier City Council’s sports facilities manager, says “Last year a West Indies ODI game was rained out and one of the contributing factors was the poor drainage in that particular area.

“Because of that and compaction over the years the previous sand slits had become contaminated with soil, and grass didn’t tend to grow quite as well in that area, so it took longer for the ground to recover when it was damaged.”

“It’s changed quite a bit, with the new stands in there. It had only just changed to a sandbased field when I left at the end of 1997.” Mexteds worked to a tight winter timeframe to fit around sporting fixtures, installing 3,500 metres of 50mm secondary sandslit drains. With early starts and late finishes, a team of five finished the work in a week. The contract focused on an area in front of the Harris Stand which doesn’t get a lot of sun.

Two Cricket World Cup games will be played at Mclean Park, beginning with the Blackcaps v Pakistan on 3 February, followed by the Blackcaps v Afghanistan on 8 March. Andrew White says the secondary drainage has been extremely successful. “It has drained magnificently in heavy rain conditions, which has been a huge improvement. Mexteds did very well and were very good to deal with.”

Major renovation works at Nairnville Park Onslow senior cricket players will enjoy much better playing conditions this season, following major renovation works at Nairnville Park in Khandallah. The previous drainage system hadn’t been touched for over 30 years and was no longer functioning. Mexteds developed a suitable design which we constructed on behalf of Wellington City Council. WCC project manager, Peter Hemsley, says “It was a sizeable undertaking as three fields were closed for the winter while this was carried out. The work included lateral drainage lines, gravel banding, field irrigation and sanding of the outfields.” Mexteds installed 4,000 metres of novacoil primary drains, using our laser level trenching system, followed by 22,600 square metres of secondary gravel banding. The outfields were re-contoured with a sand topping of 400 cubic metres of turf sand to improve drainage.

The athletics track around the perimeter of the park also had a drainage upgrade. Peter Hemsley says “This will help get the field back into play earlier for summer and helps grass growth as well, so it is in better condition for the winter.”

Softball Diamond on the move

A major redevelopment of Alex Moore Park north of Wellington, including the construction of a new synthetic surface, recently saw Mexteds working for Wellington City Council to relocate the park’s softball diamond, shifting the boundaries and fences by a few metres to accommodate a new car parking area.

Wellington City Council project manager, Peter Hemsley, says the work included excavation, relocation of the backstop fencing, a new irrigation system, limestone supply and preparation of the outfields. Where possible limestone and soil was recycled, with extra Hatuma lime brought in from Hawke’s Bay for the extended area, which was laser levelled and groomed.

The irrigation system was also extended and reconnected prior to the installation of a home plate by a sub-contractor. Peter Hemsley says, “Mexteds are always happy to go the extra mile with Wellington City Council.”

Extra portable wicket for Cricket World Cup The pressure will be on at Wellington’s Westpac Stadium in early 2015, with four ICC Cricket World Cup events following hot on the heels of two ODI matches in January. It was this packed programme that saw Mexteds engaged over spring to build and install an extra portable wicket block - a complex process involving 35 tonnes of stainless steel boxing bolted together. A rock layer was installed in the tray to form the base, topped with layers of compacted wicket clay. As a multi-purpose venue, the stadium must be able to swap between different codes, and the three portable cricket wickets are a key part of this. In preparation for a match, a sandbased tray from the centre of the stadium will be uplifted and replaced by the portable wicket block, and the sand-based turf becomes part of the outfield. Other illustrious grounds that use the same systems include Eden Park, MCG, the ANZ Stadium in Sydney and the Adelaide Oval.

Turf manager, Brett Sipthorpe, says “We have worked with Mexteds for a long time and they have been involved with the initial build of the wickets nine years ago.” He is looking forward to seeing how the new block performs for the international matches.

From Trash to Treasure At Mexteds we are keen to do our bit on the sustainability front. So we contacted mountain biking clubs in the Wellington region, offering them offcuts of novacoil for use when developing and maintaining their cycle track networks.

Rob McIntyre, president of the Mana Cycling Group, who are developing the new mountain biking park at Rangituhi Colonial Knob alongside Porirua City Council and the Department of Conservation, was thrilled with the opportunity to boost their track building programme.

Mana Cycling Group and Wellington MTB have already taken up the offer, with others ‘in the pipeline’.

If any other community groups are interested in novacoil offcuts, please contact Ken Bailey, our general manager.

Level playing field for Kura Park Dips, hollows and undulations were getting in the way of a good game of football at Kura Park in Elsdon, Porirua, so Mexteds was brought in to develop a design to create a level playing field. “Basically the park was formed over an old stream bed and had sunk over time,” explains John Callahan, Porirua City Council’s Leisure Asset Infrastructure Officer. Mexteds planed off the top 25mm, before stripping off and stockpiling 125mm of topsoil, including the old wicket block. “We cut to fill in certain areas before respreading topsoils and laser levelling to the new finished levels,

forming a single grade,” says Ken Bailey, Mexteds’ general manager. “We then fertilised and resowed the grounds.” The park is used for all grades of football from juniors to seniors. “It’s a really good football ground and has an athletics track as well, so we wanted to get the contours and levels spot on,” says John Callahan. “It came out really well, particularly because we had a very tight window to do it in before we got in to the middle of winter and it was amazing, to be honest, that Mexteds got it done so quickly.

Could your turf be in better shape? Contact us to discuss your needs Mexted Performance Sports Surfaces