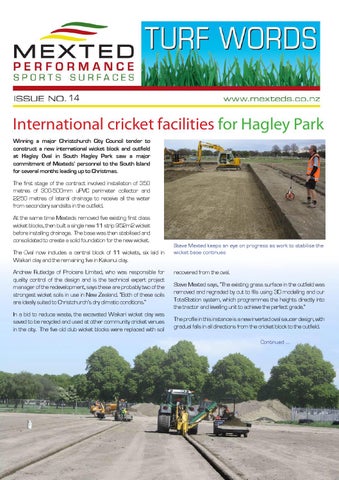 International cricket facilities for Hagley Park Winning a major Christchurch City Council tender to construct a new international wicket block and outfield at Hagley Oval in South Hagley Park saw a major commitment of Mexteds’ personnel to the South Island for several months leading up to Christmas. The first stage of the contract involved installation of 350 metres of 300-500mm uPVC perimeter collector and 2250 metres of lateral drainage to receive all the water from secondary sandslits in the outfield. At the same time Mexteds removed five existing first class wicket blocks, then built a single new 11 strip 952m2 wicket before installing drainage. The base was then stabilised and consolidated to create a solid foundation for the new wicket. The Oval now includes a central block of 11 wickets, six laid in Waikari clay and the remaining five in Kakanui clay. Andrew Rutledge of Proicere Limited, who was responsible for quality control of the design and is the technical expert project manager of the redevelopment, says these are probably two of the strongest wicket soils in use in New Zealand. “Both of these soils are ideally suited to Christchurch’s dry climatic conditions.” In a bid to reduce waste, the excavated Waikari wicket clay was saved to be recycled and used at other community cricket venues in the city. The five old club wicket blocks were replaced with soil

recovered from the oval. Steve Mexted says, “The existing grass surface in the outfield was removed and regraded by cut to fills using 3D modelling and our TotalStation system, which programmes the heights directly into the tractor and levelling unit to achieve the perfect grade.” The profile in this instance is a new inverted oval saucer design, with gradual falls in all directions from the cricket block to the outfield. Continued ....

Andrew Rutledge says he was impressed by the speed at which the resulting initial cut to fill was completed. “The use of robotic controlled inverted levelling technology is a first for a New Zealand-based contractor. This benefitted the client greatly with the outfield shape and levels being achieved with significant time savings.” By November Mexteds had installed the irrigation system and grassing was complete on the new wicket and outfield. Now it was a matter of watching the grass grow, followed by an intensive programme of rolling and mowing the wicket block. The work has not been without its challenges, including a water table in the main drain zone and the ‘capping’ of six artesian wells. Andrew says, “Mexteds managed these challenges well and modified their methodology to suit the local environs, without a compromise to quality.” At the request of the Council, Mexteds agreed to take on the maintenance and preparation of the new wicket and outfield for the first season. Turf Manager Rupert Bool and assistant Steve Tsukigawa spent the next ten weeks preparing the venue for the first match on 7 February, with Sue and Steve Mexted travelling to Christchurch to witness the moment and the fruits of many long days put in by the Mexteds team. As the first innings got underway, Rupert said, “It’s a big day today, and it’s great that it’s all come together really nicely”. Chief executive Lee Germon says Canterbury Cricket is absolutely delighted at the work that has been conducted by Team Mexted in developing the cricket ground at Hagley Oval.

“It is incredible that we have been able to play a first class game of cricket on a block that is only a couple of months old. The outfield is already one of the best in the country. The pitch report from the first match described it as one of the fastest and bounciest that the players have played on this season. Huge credit has to go to Steve, Andrew and Rupert who have led this project professionally, passionately and expertly. We are well on track to having an international quality ground in the parklands of Hagley Oval near the centre of Christchurch.”

Canterbury christened the new ground in early February, in a match against Northern Districts

Outfield upgrade to meet Twenty20 standards A downpour at the Hawkins Basin Reserve in Wellington just as the gates opened for the traditional Boxing Day Twenty20 cricket match put the new outfield drainage installed by Mexteds to the test - and it came up trumps! Bryan Dickinson, Development and Operations Manager of Cricket Wellington, says it’s testament to the success of the drainage that the game went ahead ‘absolutely fine’. In anticipation of the English test in March, New Zealand cricket last year called for an outfield upgrade, as the poor drainage was seriously slowing up play. As the oldest first class cricket ground in the country, the Basin is much loved by many. It’s come a long way since the 1800s when prison labour from Te Aro jail was used to drain the swampy ground, but ongoing problems with the outfield after rain were threatening its ability to host international matches. Urgent work was needed. Beginning last July, Mexteds installed new primary subsoil drains around the perimeter outfield. The top 60mm of playing surface was then removed and we constructed a new 40mm sand carpet. In spring sand slits were installed at two metre centres to help water percolate through to the primary drains. Following the March test match, Mexteds will be installing further sandslits, to bring the final secondary drains to one metre centres. Bryan Dickinson says the work was carried out to Mexteds’ usual high standards. “It’s draining really well now with no problems.”

Makeover for former landfill site Horowhenua District Council has recently committed $1.5 million to re-develop Playford Park in Levin. As part of the upgrade, which includes flood lighting five playing fields and the construction of a new amenity block, Mexteds’ was contracted to re-level and re-shape two rugby pitches. Parks and Leisure Manager, Duncan de Burgh, says one of the fields was built on an old landfill area and the sand surface needed levelling improvements, while the number one field required re-contouring to improve water run-off. After completing the planning, re-levelling and re-shaping work, Mexteds then re-sowed the two fields, replacing the mainly summer grass species with predominantly ryegrass. Duncan de Burgh says, as one would expect working on an old landfill site, a few issues were encountered along the way, but were quickly overcome with regular onsite discussions. “[Mexteds’ Operations Manager] Chris Parkinson and his team were very accommodating with changes to their work programme … to ensure we maintained a consistent depth of sand and achieved desired surface levels. The work was completed to a very high standard and grass establishment has been very successful. We now have two ryegrass dominated fields which will be ready for play the first weekend in April.”

Mexteds’ new Ecodresser - upgrading made simple If sports field renovation is on your ‘to do’ list this autumn, Mexteds can now offer an economical and environmentally-friendly topdressing option with the addition of an Ecodresser to its plant. Steve Mexted visited the Dutch factory where the Ecodresser is made, and immediately recognised its potential for sports field upgrade work in New Zealand. “Its ability to recycle soils onsite also helps us meet our goals for improving sustainability wherever possible.” The Ecodresser - so called because it harvests and recycles compatible surface topsoil while leaving the turf intact - can be used to renovate playing surfaces that have become compacted or uneven. Mexteds’ unit has the additional feature of a screen that screens out any stones before re-laying the soil to create a level, well aerated surface. The Ecodresser can also be used to carry recycled soil to low areas, such as goal mouths, then drop and spread it, without the need to supply or import costly seasonal topsoils. The aerated and well drained soil creates excellent conditions for re-grassing and the Ecodresser can be used prior to re-sowing, undersowing, dimple seeding or broadcasting. For optimum results, it is used when soil conditions are soft, such as spring and autumn. The Ecodresser is a very cost effective option for improving the quality of playing surfaces, achieving multiple functions in a single pass. It can be used for sports fields, race/trotting courses, golf courses, fields and parks, without disturbing grass growth.

More info? If you would like to discuss this option for your restoration work, please contact Steve on 0274 421 838. The Ecodresser’s unique action

We hope you’ve enjoyed this edition of Turf Words, bringing you up to speed with some of the projects we’ve been working on in the last few months. It’s been challenging at times with tight deadlines and the elements sometimes against us. Full

credit must go to all our dedicated team who’ve put in long hours, some working away from home, to complete these large projects, as well as continuing with our customers’ Spring renovation programmes. It’s been a huge commitment from all involved. - Steve Mexted