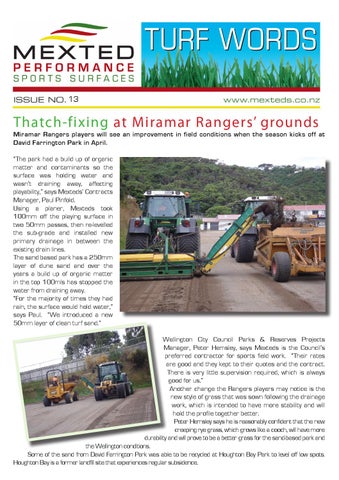 Thatch-fixing at Miramar Rangers’ grounds Miramar Rangers players will see an improvement in field conditions when the season kicks off at David Farrington Park in April. “The park had a build up of organic matter and contaminants so the surface was holding water and wasn’t draining away, affecting playability,” says Mexteds’ Contracts Manager, Paul Pinfold. Using a planer, Mexteds took 100mm off the playing surface in two 50mm passes, then re-levelled the sub-grade and installed new primary drainage in between the existing drain lines. The sand based park has a 250mm layer of dune sand and over the years a build up of organic matter in the top 100mls has stopped the water from draining away. “For the majority of times they had rain, the surface would hold water,” says Paul. “We introduced a new 50mm layer of clean turf sand.” Wellington City Council Parks &amp; Reserves Projects Manager, Peter Hemsley, says Mexteds is the Council’s preferred contractor for sports field work. “Their rates are good and they kept to their quotes and the contract. There is very little supervision required, which is always good for us.” Another change the Rangers players may notice is the new style of grass that was sown following the drainage work, which is intended to have more stability and will hold the profile together better. Peter Hemsley says he is reasonably confident that the new creeping rye grass, which grows like a cooch, will have more durability and will prove to be a better grass for the sand-based park and the Wellington conditions. Some of the sand from David Farrington Park was able to be recycled at Houghton Bay Park to level off low spots. Houghton Bay is a former landfill site that experiences regular subsidence.

reinstate the grass, using our front mounted turf lifter on the JCB, which can lay two of these rolls at the same time,” says Paul.

Currently the gaps - where the horses enter and leave the track - are located too close to the finish line. “We will be moving the gaps further around the course,” says Paul Pinfold, Mexteds’ Contracts Manager. Creating the new gap, which must withstand significant horse traffic, involves digging out 300mm of soil and replacing it with a 200mm layer of pit sand, covering this with a layer of geo cloth and then topping with a 100mm layer of processed sand. Closing the former gap close to the finish line will require a reverse process, digging out the sand and reinstating the area with topsoil. “We will then lay 1m wide x 10m long big roll turf to

Off to the Coast ... Mexteds has recently completed two contracts for the Kapiti Coast District Council. At Paraparaumu Domain there were problems over the winter with areas holding water after rain. Mexteds was contracted to re-shape the swale drain on one sideline and on the other side reduce the ground height, allowing water to reach the drain. Following the work, the area was regrassed and fertiliser applied. Mexteds staff have also been working at the attractive Haruatai Park in Otaki this summer, installing primary drainage across two soccer fields to remedy isolated wet areas. Using laser technology to ensure perfect falls, our Malleti trencher was used to install 1380 metres of new subsoil drains. The drainage work, which took three days to complete, was undertaken using one of our Fendt tractors and a backfilling bin, configured to install chip followed by a sand layer in a separate pass. Drainage work was completed in early December, and levelling work prior to sowing was undertaken in February. Jonny Baxter, the Council’s Leisure and Open Space Contract Operations Officer says “Both projects have now been completed, meeting all technical requirements and desired outcomes of the Kapiti Coast District Council. The professional service, experience and specialist equipment has allowed these high use parks to remain open and useable throughout the summer period. Thanks team!”

Above: Reshaping the swale drain at Paraparaumu Domain Below: Trenching and backfilling at Haruatai Park, Otaki

Blec Sandmaster - fast and cost efficient Surface water can be a problem for sports fields if there is compaction, or in heavy clay soils with poor natural percolation, even when primary and secondary drainage systems are in place. If root zone drainage or surface ponding is causing problems for your sports turf, Mexteds has a secondary drainage solution that can be installed with minimum disruption to boost the effectiveness of primary drains. Using the efficient one-pass Blec Sandmaster system, soils are decompacted while sand is fed

from the hopper into 15-20mm wide slits created by the decompactor blades. These mini-trenches, which can be set at between 200mm and 260mm deep, create continuous drainage channels, feeding water into existing primary and secondary systems. As surface disturbance is minimal, installing sand slits with the Blec Sandmaster is ideal for golf courses, rugby and football pitches and race courses. It is ‘instal today, play tomorrow’ technology providing a practical decompaction solution for high-use sports fields.

Turf Farm upgrade calls for care and attention The need to install primary drains and an irrigation system without causing damage to existing grass saw Mexteds chosen by Wellington’s Westpac Stadium to carry out work for the Palmerston North company that supplies the stadium’s turf. Westpac Stadium recently renewed its contract with Turflands, and the installation of a new drainage system, along with an irrigation upgrade,

will ensure a better and more consistent product. Mexteds installed 500 metres of novacoil drains using our Malletti trencher and elevator, fitted to Fendt turf-tyre tractor, to ensure existing grassed areas were not damaged during the works. Mexteds also replaced the travelling irrigator with a computer-controlled pop-up system.

From UK to NZ – Rob’s here to stay Mexteds machine operator Rob Elenor recently received the news he’s been waiting for since he and his family arrived in New Zealand in 2010. With support from Mexteds for his application to Immigration New Zealand, the family has been granted permanent residency. Rob has brought valuable skills to our company, having worked as head green keeper at Thirsk &amp; Northallerton golf club near York before coming to New Zealand eighteen months ago. “We love it round here and Mexteds have given us a great opportunity to come to the country and settle,” says Rob. Rob believes the specialised nature of Mexteds’ work helped his immigration application. “We are delighted to know Rob is here to stay,” says Steve Mexted. “He is a great asset and has fitted in very well.”

Welcome to our new staff Jason Evans recently joined our staff as a trainee operator. The former manager of Espresso Car Wash Cafe in Porirua says he became interested in joining our company after getting to know Steve and Sue Mexted as customers.

Mike McKay came on board in August last year, and spends most of his time in the workshop, under the guidance of engineer Clayton Tume. “The work includes welding, fabricating and rebuilding new parts and general R&amp;M,” says Mike. When extra manpower is needed out in the field, Mike helps out with labouring work, getting the opportunity to understand and see the machinery in action.

After a successful interview Jason joined the team in November, initially doing labouring and operating the loader and dumper. Jason says, “It’s been better than I imagined. It’s amazing how many different skills are required.” Jason has just completed his Class 2 Licence through the PassRite Driving Academy in Porirua, which opens up new opportunities to move into tractor work with the company. “I think every guy has a dream to operate this type of equipment, so it’s a great opportunity to do that. It’ll be the next big learning curve.”

Mexteds - ahead of the game!