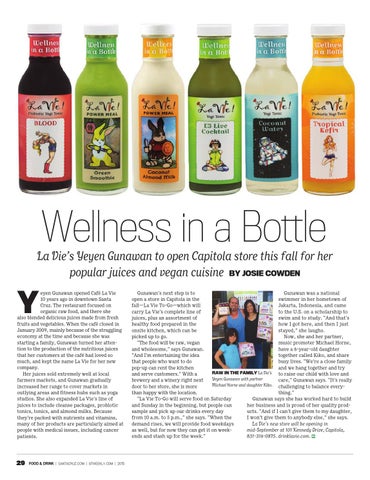 eyen Gunawan opened Café La Vie 10 years ago in downtown Santa Cruz. The restaurant focused on organic raw food, and there she also blended delicious juices made from fresh fruits and vegetables. When the café closed in January 2009, mainly because of the struggling economy at the time and because she was starting a family, Gunawan turned her attention to the production of the nutritious juices that her customers at the café had loved so much, and kept the name La Vie for her new company. Her juices sold extremely well at local farmers markets, and Gunawan gradually increased her range to cover markets in outlying areas and fitness hubs such as yoga studios. She also expanded La Vie’s line of juices to include cleanse packages, probiotic tonics, tonics, and almond milks. Because they’re packed with nutrients and vitamins, many of her products are particularly aimed at people with medical issues, including cancer patients.

Gunawan’s next step is to Gunawan was a national open a store in Capitola in the swimmer in her hometown of fall—La Vie To-Go—which will Jakarta, Indonesia, and came carry La Vie’s complete line of to the U.S. on a scholarship to juices, plus an assortment of swim and to study. “And that’s healthy food prepared in the how I got here, and then I just onsite kitchen, which can be stayed,” she laughs. picked up to go. Now, she and her partner, “The food will be raw, vegan music promoter Michael Horne, and wholesome,” says Gunawan. have a 6-year-old daughter “And I’m entertaining the idea together called Kiko, and share that people who want to do busy lives. “We’re a close family pop-up can rent the kitchen and we hang together and try RAW IN THE FAMILY La Vie’s and serve customers.” With a to raise our child with love and Yeyen Gunawan with partner brewery and a winery right next care,” Gunawan says. “It’s really Michael Horne and daughter Kiko. challenging to balance everydoor to her store, she is more than happy with the location. thing.” “La Vie To-Go will serve food on Saturday Gunawan says she has worked hard to build and Sunday in the beginning, but people can her business and is proud of her quality prodsample and pick up our drinks every day ucts. “And if I can’t give them to my daughter, from 10 a.m. to 5 p.m.,” she says. “When the I won’t give them to anybody else,” she says. demand rises, we will provide food weekdays La Vie’s new store will be opening in as well, but for now they can get it on weekmid-September at 101 Kennedy Drive, Capitola, ends and stash up for the week.” 831-316-0875. drinklavie.com.