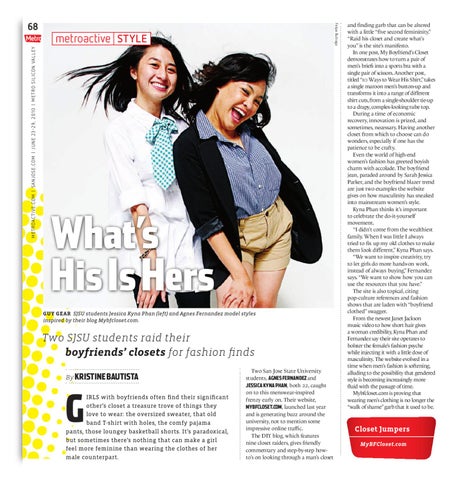 Two San Jose State University students, AGNES FERNANDEZ and JESSICA KYNA PHAN, both 22, caught on to this menswear-inspired frenzy early on. Their website, MYBFCLOSET.COM, launched last year and is generating buzz around the university, not to mention some impressive online traffic. The DIY blog, which features nine closet raiders, gives friendly commentary and step-by-step howto’s on looking through a man’s closet

and ﬁnding garb that can be altered with a little “ﬁve second femininity.” “Raid his closet and create what’s you” is the site’s manifesto. In one post, My Boyfriend’s Closet demonstrates how to turn a pair of men’s briefs into a sports bra with a single pair of scissors. Another post, titled “10 Ways to Wear His Shirt,” takes a single maroon men’s button-up and transforms it into a range of different shirt cuts, from a single-shoulder tie-up to a drapy, complex-looking tube top. During a time of economic recovery, innovation is prized, and sometimes, necessary. Having another closet from which to choose can do wonders, especially if one has the patience to be crafty. Even the world of high-end women’s fashion has greeted boyish charm with accolade. The boyfriend jean, paraded around by Sarah Jessica Parker, and the boyfriend blazer trend are just two examples the website gives on how masculinity has sneaked into mainstream women’s style. Kyna Phan thinks it’s important to celebrate the do-it-yourself movement. “I didn’t come from the wealthiest family. When I was little I always tried to ﬁx up my old clothes to make them look different,” Kyna Phan says. “We want to inspire creativity, try to let girls do more hands-on work, instead of always buying,” Fernandez says. “We want to show how you can use the resources that you have.” The site is also topical, citing pop-culture references and fashion shows that are laden with “boyfriend clothed” swagger. From the newest Janet Jackson music video to how short hair gives a woman credibility, Kyna Phan and Fernandez say their site operates to bolster the female’s fashion psyche while injecting it with a little dose of masculinity. The website evolved in a time when men’s fashion is softening, alluding to the possibility that gendered style is becoming increasingly more ﬂuid with the passage of time. Mybfcloset.com is proving that wearing men’s clothing is no longer the “walk of shame” garb that it used to be.