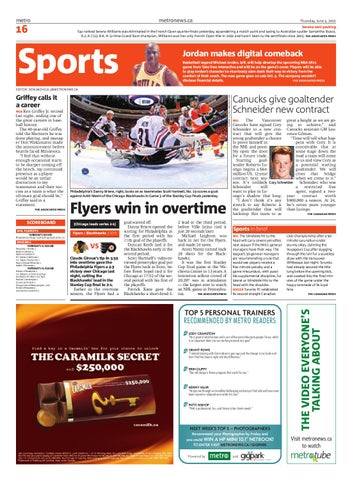 Serena sent packing Top-ranked Serena Williams was eliminated in the French Open quarter-finals yesterday, squandering a match point and losing to Australian spoiler Samantha Stosur, 6-2, 6-7 (2), 8-6. A 12-time Grand Slam champion, Williams won her only French Open title in 2002 and hasn’t been to the semifinals since 2003. THE ASSOCIATED PRESS

Jordan makes digital comeback Basketball legend Michael Jordan, left, will help develop the upcoming NBA 2K11 game from Take-Two Interactive and will be on the game’s cover. Players will be able to play Jordan’s character to vicariously slam dunk their way to victory from the comfort of their couch. The new game goes on sale Oct. 5. The company wouldn’t disclose financial details. THE ASSOCIATED PRESS

Philadelphia’s Danny Briere, right, looks on as teammates Scott Hartnell, No. 19 scores a goal against Antti Niemi of the Chicago Blackhawks in Game 3 of the Stanley Cup Finals yesterday.

VS Claude Giroux’s tip-in 5:59 into overtime gave the Philadelphia Flyers a 4-3 victory over Chicago last night, cutting the Blackhawks’ lead in the Stanley Cup final to 2-1. Earlier in the overtime session, the Flyers had a

goal waived off. Danny Briere opened the scoring for Philadelphia in the first period with his 11th goal of the playoffs. Duncan Keith tied it for the Blackhawks early in the second period. Scott Hartnell’s video-reviewed power-play goal put the Flyers back in front, before Brent Sopel tied it for Chicago at 17:52 of the second period with his first of the playoffs. Patrick Kane gave the Blackhawks a short-lived 3-

2 lead in the third period, before Ville Leino tied it just 20 seconds later. Michael Leighton was back in net for the Flyers, and made 24 saves. Annti Niemi turned back 28 shots for the Blackhawks. It was the first Stanley Cup final game at the Wachovia Center in 13 years. A boisterous sellout crowd of 20,297 was in attendance — the largest ever to watch an NHL game in Pennsylvania. THE ASSOCIATED PRESS

The Vancouver great a height as we are goCanucks have signed Cory ing to achieve,” said Schneider to a new con- Canucks assistant GM Lautract that will give the rence Gilman. “Time will tell what hapyoung goaltender a chance pens with Cory. It is to prove himself in conceivable that at the NHL and possisome stage down the bly open the door road a team will come for a future trade. to us and view Cory as Starting goala potential starting tender Roberto Lugoaltender. We will ongo begins a $64cross that bridge million US, 12-year when we come to it.” contract next seaSchneider, who was son. It’s unlikely Cory Schneider a restricted free Schneider will agent, signed a twowant to play in Lucontract worth ongo’s shadow that long. year “I don’t think it’s any $900,000 a season. At 24, stretch to say Roberto is he’s seven years younger the goaltender that will than Luongo. backstop this team to as THE CANADIAN PRESS

Sports in brief NHL The blindside hit to the head will carry severe penalties next season if the NHL’s general managers have their way. The league’s 30 general managers are recommending a rule that would see players receive a five-minute penalty and a game misconduct, with possible supplemental discipline, for lateral or blindside hits to the head with the shoulder. SOCCER Toronto FC celebrated its second straight Canadian

TOP 5 PERSONAL TRAINERS RECOMMENDED BY METRO READERS JODY CRANSTON &quot;He is great at what he does and is one of the most enthusiastic people I know, which is so important when you are working towards any goal.” GRANT ROWE &quot;I started training with Grant about a year ago and the change in my looks and how I feel has been a night and day difference.”

ERIN GUPPY &quot;She will design a fitness program that works for you.”

KENNY MUIR &quot;He puts me through an incredibly challenging workout yet I feel safe and have never been injured or relapsed once under his care.” PATTI BISHOP &quot;Patti is professional, fun, and listens to her clients needs.”

NEXT WEEK’S TOP 5 – PHOTOGRAPHERS Recommend your Photographer by Friday and you could WIN A HP MINI 10.1&quot; NETBOOK! TO ENTER VISIT METRONEWS.CA/GIGPARK Powered by

club championship after a 90minute coronation under stormy skies, claiming the Voyageurs Cup after slogging through the rain for a scoreless draw with the Vancouver Whitecaps last night. Toronto had already secured the title long before the opening kick, and coasted into the final minutes of the game under the happy serenade of its loyal fans. THE CANADIAN PRESS

THE VIDEO EVERYONE’S TALKING ABOUT

MLB Ken Griffey Jr. retired last night, ending one of the great careers in baseball history. The 40-year-old Griffey told the Mariners he was done playing, and manager Don Wakamatsu made the announcement before Seattle faced Minnesota. “I feel that without enough occasional starts to be sharper coming off the bench, my continued presence as a player would be an unfair distraction to my teammates and their success as a team is what the ultimate goal should be,” Griffey said in a statement.

Griffey calls it a career 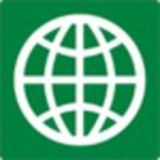