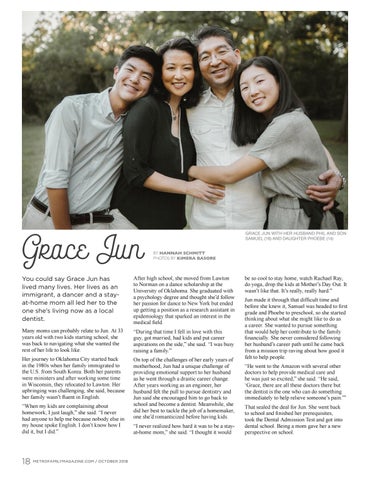 Real Moms of the Metro:

You could say Grace Jun has lived many lives. Her lives as an immigrant, a dancer and a stayat-home mom all led her to the one she’s living now as a local dentist.

After high school, she moved from Lawton to Norman on a dance scholarship at the University of Oklahoma. She graduated with a psychology degree and thought she’d follow her passion for dance to New York but ended up getting a position as a research assistant in epidemiology that sparked an interest in the medical field.

Many moms can probably relate to Jun. At 33 years old with two kids starting school, she was back to navigating what she wanted the rest of her life to look like.

“During that time I fell in love with this guy, got married, had kids and put career aspirations on the side,” she said. “I was busy raising a family.”

Her journey to Oklahoma City started back in the 1980s when her family immigrated to the U.S. from South Korea. Both her parents were ministers and after working some time in Wisconsin, they relocated to Lawton. Her upbringing was challenging, she said, because her family wasn’t fluent in English.

On top of the challenges of her early years of motherhood, Jun had a unique challenge of providing emotional support to her husband as he went through a drastic career change. After years working as an engineer, her husband felt the pull to pursue dentistry and Jun said she encouraged him to go back to school and become a dentist. Meanwhile, she did her best to tackle the job of a homemaker, one she’d romanticized before having kids.

“When my kids are complaining about homework, I just laugh,” she said. “I never had anyone to help me because nobody else in my house spoke English. I don’t know how I did it, but I did.”

“I never realized how hard it was to be a stayat-home mom,” she said. “I thought it would

be so cool to stay home, watch Rachael Ray, do yoga, drop the kids at Mother’s Day Out. It wasn’t like that. It’s really, really hard.” Jun made it through that difficult time and before she knew it, Samuel was headed to first grade and Phoebe to preschool, so she started thinking about what she might like to do as a career. She wanted to pursue something that would help her contribute to the family financially. She never considered following her husband’s career path until he came back from a mission trip raving about how good it felt to help people. “He went to the Amazon with several other doctors to help provide medical care and he was just so excited,” she said. “He said, ‘Grace, there are all these doctors there but the dentist is the one who can do something immediately to help relieve someone’s pain.’” That sealed the deal for Jun. She went back to school and finished her prerequisites, took the Dental Admission Test and got into dental school. Being a mom gave her a new perspective on school. 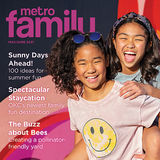