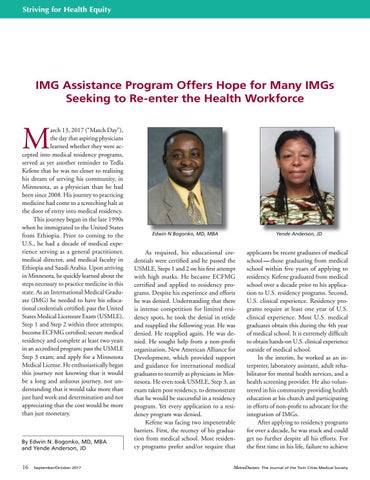 arch 13, 2017 (â&amp;#x20AC;&amp;#x153;Match Dayâ&amp;#x20AC;?), the day that aspiring physicians learned whether they were accepted into medical residency programs, served as yet another reminder to Tedla Kefene that he was no closer to realizing his dream of serving his community, in Minnesota, as a physician than he had been since 2008. His journey to practicing medicine had come to a screeching halt at the door of entry into medical residency. This journey began in the late 1990s when he immigrated to the United States from Ethiopia. Prior to coming to the U.S., he had a decade of medical experience serving as a general practitioner, medical director, and medical faculty in Ethiopia and Saudi Arabia. Upon arriving in Minnesota, he quickly learned about the steps necessary to practice medicine in this state. As an International Medical Graduate (IMG) he needed to have his educational credentials certified; pass the United States Medical Licensure Exam (USMLE), Step 1 and Step 2 within three attempts; become ECFMG certified; secure medical residency and complete at least two years in an accredited program; pass the USMLE Step 3 exam; and apply for a Minnesota Medical License. He enthusiastically began this journey not knowing that it would be a long and arduous journey, not understanding that it would take more than just hard work and determination and not appreciating that the cost would be more than just monetary.

As required, his educational credentials were certified and he passed the USMLE, Steps 1 and 2 on his first attempt with high marks. He became ECFMG certified and applied to residency programs. Despite his experience and efforts he was denied. Understanding that there is intense competition for limited residency spots, he took the denial in stride and reapplied the following year. He was denied. He reapplied again. He was denied. He sought help from a non-profit organization, New American Alliance for Development, which provided support and guidance for international medical graduates to recertify as physicians in Minnesota. He even took USMLE, Step 3, an exam taken post residency, to demonstrate that he would be successful in a residency program. Yet every application to a residency program was denied. Kefene was facing two impenetrable barriers. First, the recency of his graduation from medical school. Most residency programs prefer and/or require that

The Journal of the Twin Cities Medical Society

In This Issue: • Get Involved! • Finding Your “Cultural Humility” • 8th Annual Sharing the Experience Conference • Luminary of Twin Cities Medicine 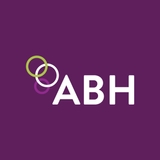