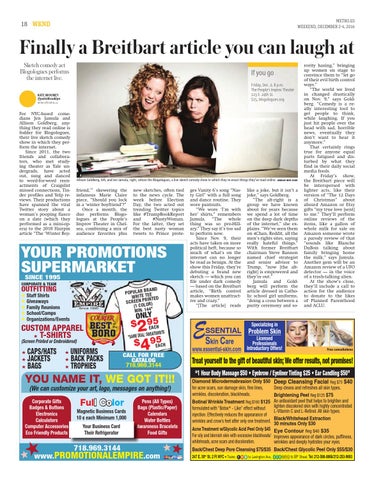 Finally a Breitbart article you can laugh at Sketch comedy act Blogologues performs the internet live.

For NYC-based comedians Jen Jamula and Allison Goldberg, anything they read online is fodder forÂ Blogologues, their live sketch comedy show in which they perform the internet. Since 2011, the two friends and collaborators, who met studying theater as Yale undergrads, have acted out, sung and danced to word-for-word reenactments of Craigslist missed connections, Tinder profiles and Yelp reviews. Their productions have spanned theÂ  viral Twitter storyÂ  about a womanâ&#x20AC;&#x2122;s pooping fiasco on a date (which they performed as a mini-opera) to theÂ  2010 Hairpin article â&#x20AC;&#x153;The â&#x20AC;&#x2DC;Winter Boy-

new sketches, often tied to the news cycle. The week before Election Day, the two acted out trending Twitter topics like #TrumpBookReport and #NastyWoman. For the latter, they set the best nasty woman tweets to Prince prote-

YOUR PROMOTIONS SUPERMARKET SINCE 1995 CORPORATE & TEAM

EACH EATSHIRTS SW : AL DE EACH

YOU NAME IT, WE GOT IT!!! (We can customize your art, logo, messages on anything!) Corporate Gifts Badges & Buttons Electronics Calculators Computer Accessories Eco Friendly Products