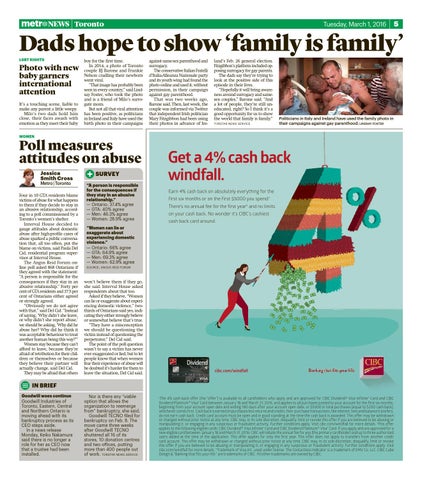 Photo with new baby garners international attention It’s a touching scene, liable to make any parent a little weepy. Milo’s two dads hold him close, their faces awash with emotion as they meet their baby

boy for the first time. In 2014, a photo of Toronto couple BJ Barone and Frankie Nelson cradling their newborn went viral. “That image has probably been seen in every country,” said Lindsay Foster, who took the photo and is a friend of Milo’s surrogate mom. But not all that viral attention has been positive, as politicians in Ireland and Italy have used the birth photo in their campaigns

against same-sex parenthood and surrogacy. The conservative Italian Fratelli d’Italia-Alleanza Nazionale party and its youth wing had found the photo online and used it, without permission, in their campaign against gay parenthood. That was two weeks ago, Barone said. Then, last week, the couple was informed via Twitter that independent Irish politician Mary Fitzgibbon had been using their photos in advance of Ire-

land’s Feb. 26 general election. Fitzgibbon’s platform included opposing surrogacy for gay parents. The dads say they’re trying to look at the positive side of this episode in their lives. “Hopefully it will bring awareness around surrogacy and samesex couples,” Barone said. “And a lot of people, they’re still uneducated, right? So I think it’s a good opportunity for us to show the world that family is family.” Torstar News Service

Politicians in Italy and Ireland have used the family photo in their campaigns against gay parenthood. LINDSAY FOSTER

Four in 10 GTA residents blame victims of abuse for what happens to them if they decide to stay in an abusive relationship, according to a poll commissioned by a Toronto’s women’s shelter. Interval House decided to gauge attitudes about domestic abuse after high-profile cases of abuse sparked a public conversation that, all too often, put the blame on victims, said Paula Del Cid, residential program supervisor at Interval House. The Angus Reid Forum online poll asked 868 Ontarians if they agreed with the statement: “A person is responsible for the consequences if they stay in an abusive relationship.” Forty per cent of GTA residents and 37.5 per cent of Ontarians either agreed or strongly agreed. “Obviously we do not agree with that,” said Del Cid. “Instead of saying, ‘Why didn’t she leave, or why didn’t she report abuse,’ we should be asking, ‘Why did he abuse her? Why did he think it was acceptable behaviour to treat another human being this way?’” Women stay because they can’t afford to leave, because they’re afraid of retribution for their children or themselves or because they believe their partner will actually change, said Del Cid. They may be afraid that others

Get a 4% cash back windfall.

Earn 4% cash back on absolutely everything for the first six months or on the first $5000 you spend.† There’s no annual fee for the first year◊ and no limits on your cash back. No wonder it’s CIBC’s cashiest cash back card around.

won’t believe them if they go, she said. Interval House asked respondents about that too. Asked if they believe, “Women can lie or exaggerate about experiencing domestic violence,” twothirds of Ontarians said yes, indicating they either strongly believe or somewhat believe that’s true. “They have a misconception we should be questioning the victim instead of questioning the perpetrator,” Del Cid said. The point of the poll question wasn’t to say a victim has never ever exaggerated or lied, but to let people know that when women fear their experience of abuse will be doubted it’s harder for them to leave the situation, Del Cid said.

IN BRIEF Goodwill woes continue Goodwill Industries of Toronto, Eastern, Central and Northern Ontario is moving ahead with its bankruptcy process as its CEO steps aside. In a news release Monday, Keiko Nakamura said there is no longer a role for her as CEO now that a trustee had been installed.

Nor is there any “viable option that allows the organization to reemerge from” bankruptcy, she said. Goodwill TECNO filed for bankruptcy on Feb. 8. The move came three weeks after Goodwill TECNO shuttered all 16 of its stores, 10 donation centres and two offices, putting more than 400 people out of work. Torstar News Service