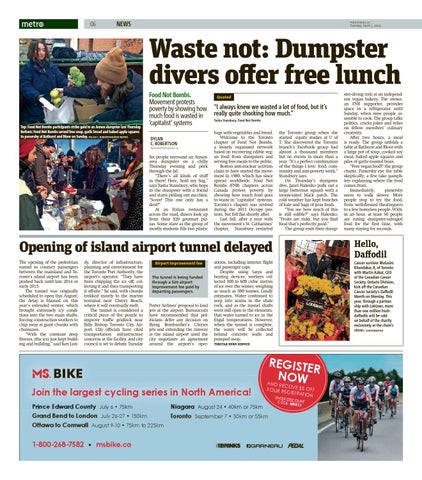 Food Not Bombs. Movement protests poverty by showing how much food is wasted in ‘capitalist’ systems dylan C. Robertson

Six people surround an Annexarea dumpster on a chilly Thursday evening and peek through the lid. “There’s all kinds of stuff in there! Here, hold my bag,” says Tasha Stansbury, who hops in the dumpster with a friend and starts pulling out zucchini. “Score! This one only has a dent!” At an Italian restaurant across the road, diners look up from their $20 gourmet pizzas. Some stare as the group of mostly students fills two plastic

“I always knew we wasted a lot of food, but it’s really quite shocking how much.” Tasha Stansbury, Food Not Bombs

bags with vegetables and bread. Welcome to the Toronto chapter of Food Not Bombs, a loosely organized network based on recovering edible vegan food from dumpsters and serving free meals to the public. Boston anti-nuclear activists claim to have started the movement in 1980, which has since spread worldwide. Food Not Bombs (FNB) chapters across Canada protest poverty by showing how much food goes to waste in “capitalist” systems. Toronto’s chapter was revived during the 2011 Occupy protests, but fell flat shortly after. Last fall, after a year with the movement’s St. Catharines’ chapter, Stansbury restarted

the Toronto group when she started equity studies at U of T. She discovered the Toronto branch’s Facebook group had almost a thousand members but no events in more than a year. “It’s a perfect combination of the things I love: food, community and anti-poverty work,” Stansbury says. On Thursday’s dumpster dive, Janel Halenko pulls out a large butternut squash with a toonie-sized black patch. The cold weather has kept bunches of kale and bags of peas fresh. “You see how much of this is still edible?” says Halenko. “Fruits are risky, but you find food that’s perfectly good.” The group ends their dump-

Opening of island airport tunnel delayed The opening of the pedestrian tunnel to connect passengers between the mainland and Toronto’s island airport has been pushed back until late 2014 or early 2015. The tunnel was originally scheduled to open this August; the delay is blamed on this year’s extended winter, which brought extremely icy conditions into the two main shafts, forcing construction workers to chip away at giant chunks with chainsaws. “With the constant deep freezes, (the ice) just kept building and building,” said Ken Lun-

dy, director of infrastructure, planning and environment for the Toronto Port Authority, the airport’s operator. “They have been chipping the ice off, collecting it and then transporting it off-site,” he said, with chunks trekked mostly to the marine terminal near Cherry Beach, where it will eventually melt. The tunnel is considered a critical piece of the puzzle to improve traffic gridlock near Billy Bishop Toronto City Airport. City officials have cited transportation infrastructure concerns at the facility, and city council is set to debate Tuesday

The tunnel is being funded through a $20 airport improvement fee paid by departing passengers.

Porter Airlines’ proposal to land jets at the airport. Bureaucrats have recommended that politicians defer any decision on flying Bombardier’s CSeries jets and extending the runway at the island airport until the city negotiates an agreement around the airport’s oper-

ations, including interim flight and passenger caps. Despite using tarps and heating devices, workers collected 500 to 600 cubic metres of ice over the winter, weighing as much as 500 tonnes, Lundy estimates. Water continued to seep into seams in the shale rock, and as the tunnel shafts were still open to the elements, that water turned to ice in the frigid temperatures. However, when the tunnel is complete, the water will be collected behind concrete walls and pumped away.

and re ceive $ 5 off your r egistra tion e

ster-diving trek at an independent vegan bakery. The owner, an FNB supporter, provides space in a refrigerator until Sunday, when nine people assemble to cook. The group talks politics, cracks jokes and relies on fellow members’ culinary creativity. After two hours, a meal is ready. The group unfolds a table at Bathurst and Bloor with a large pot of soup, cooked soy meat, baked apple squares and piles of garlic-toasted buns. “Free vegan food!” the group chants. Passersby eye the table skeptically; a few take pamphlets explaining where the food comes from. Immediately, passersby seem to walk slower. More people stop to try the food, from well-dressed theatregoers to a few homeless people. Within an hour, at least 50 people are eating dumpster-salvaged food for the first time, with many staying for seconds.