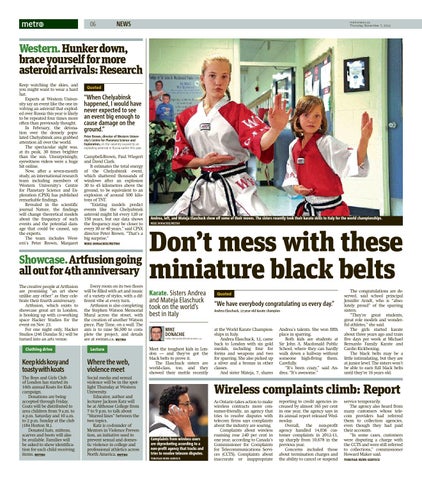 Western. Hunker down, brace yourself for more asteroid arrivals: Research Keep watching the skies, and you might want to wear a hard hat. Experts at Western University say an event like the one involving an asteroid that exploded over Russia this year is likely to be repeated four times more often than previously thought. In February, the detonation over the densely populated Chelyabinsk area grabbed attention all over the world. The spectacular sight was, at its peak, 30 times brighter than the sun. Unsurprisingly, eyewitness videos were a huge hit online. Now, after a seven-month study, an international research team including members of Western University’s Centre for Planetary Science and Exploration (CPSX) has published remarkable findings. Revealed in the scientific journal Nature, the findings will change theoretical models about the frequency of such events and the potential damage that could be caused, say the experts. The team includes Western’s Peter Brown, Margaret

“When Chelyabinsk happened, I would have never expected to see an event big enough to cause damage on the ground.” Peter Brown, director of Western University’s Centre for Planetary Science and Exploration, on the calamity caused by an exploding asteroid in Russia earlier this year.

Campbell-Brown, Paul Wiegert and David Clark. It estimates the total energy of the Chelyabinsk event, which shattered thousands of windows after an explosion 30 to 45 kilometres above the ground, to be equivalent to an explosion of around 500 kilotons of TNT. “Existing models predict events like the Chelyabinsk asteroid might hit every 120 or 150 years, but our data shows the frequency may be closer to every 30 or 40 years,” said CPSX director Peter Brown. “That’s a big surprise.”

Andrea, left, and Mateja Elaschuck show off some of their moves. The sisters recently took their karate skills to Italy for the world championships.

Don’t mess with these Showcase. Artfusion going all out for 4th anniversary miniature black belts The creative people at Artfusion are promising “an art show unlike any other” as they celebrate their fourth anniversary. Artfusion, which exists to showcase great art in London, is hooking up with co-working space Hacker Studios for the event on Nov. 23. For one night only, Hacker Studios (246 Dundas St.) will be turned into an arts venue. Clothing drive

Every room on its two floors will be filled with art and music of a variety of styles, with a different vibe at every turn. Artfusion is also completing the Stephen Watson Memorial Mural across the street, with the creation of another Watson piece, Play Time, on a wall. The aim is to raise $6,500 to complete the project, and details are at swmm.ca. metro Lecture

Where the web, violence meet

The Boys and Girls Club of London has started its 16th annual Koats for Kids campaign. Donations are being accepted through Friday. Coats will be distributed to area children from 9 a.m. to 4 p.m. Saturday and 10 a.m. to 2 p.m. Sunday at the club (184 Horton St.). Donated hats, mittens, scarves and boots will also be available. Families will be asked to show identification for each child receiving items. metro

Social media and sexual violence will be in the spotlight Thursday at Western University. Educator, author and lecturer Jackson Katz will be at Althouse College from 7 to 9 p.m. to talk about “blurred lines” between the two topics. Katz is co-founder of Mentors in Violence Prevention, an initiative used to prevent sexual and domestic violence in college and professional athletics across North America. metro

Meet the toughest kids in London — and they’ve got the black belts to prove it. The Elaschuck sisters are world-class, too, and they showed their mettle recently

“We have everybody congratulating us every day.” Andrea Elaschuck, 12-year-old karate champion

at the World Karate Championships in Italy. Andrea Elaschuck, 12, came back to London with six gold medals, including four for forms and weapons and two for sparring. She also picked up a silver and a bronze in other classes. And sister Mateja, 7, shares

Andrea’s talents. She won fifth place in sparring. Both kids are students at Sir John A. Macdonald Public School, where they can hardly walk down a hallway without someone high-fiving them. Carefully. “It’s been crazy,” said Andrea. “It’s awesome.”

The congratulations are deserved, said school principal Jennifer Arndt, who is “absolutely proud” of the sparring sisters. “They’re great students, great role models and wonderful athletes,” she said. The girls started karate about three years ago and train five days per week at Michael Bernardo Family Karate and Cardio Kickboxing. The black belts may be a little intimidating, but they are at junior level. The sisters won’t be able to earn full black belts until they’re 16 years old.

Complaints from wireless users are skyrocketing according to a non-profit agency that tracks and tries to resolve telecom disputes. torstar news service

As Ontario takes action to make wireless contracts more consumer-friendly, an agency that tries to resolve disputes with telecom firms says complaints about the industry are soaring. Complaints about wireless roaming rose 240 per cent in one year, according to Canada’s Commissioner for Complaints for Telecommunications Services (CCTS). Complaints about inaccurate or inappropriate

reporting to credit agencies increased by almost 165 per cent in one year, the agency says in its annual report released Wednesday. Overall, the non-profit agency handled 14,036 customer complaints in 2012-13, up sharply from 10,678 in the previous year. Concerns included those about termination charges and the ability to cancel or suspend

service temporarily. The agency also heard from many customers whose telecom providers had referred them to collection agencies, even though they had paid their accounts. “In some cases, customers were disputing a charge with the CCTS and were still referred to collections,” commissioner Howard Maker said. torstar news service