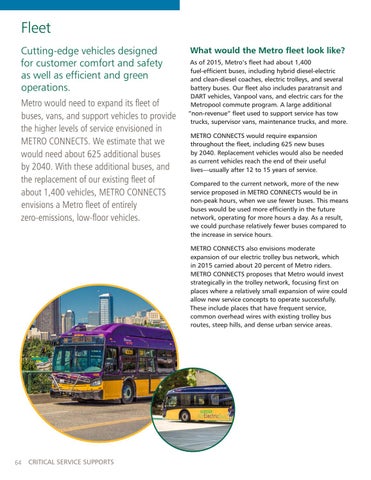 Fleet Cutting-edge vehicles designed for customer comfort and safety as well as efficient and green operations. Metro would need to expand its fleet of buses, vans, and support vehicles to provide the higher levels of service envisioned in METRO CONNECTS. We estimate that we would need about 625 additional buses by 2040. With these additional buses, and the replacement of our existing fleet of about 1,400 vehicles, METRO CONNECTS envisions a Metro fleet of entirely zero-emissions, low-floor vehicles.

What would the Metro fleet look like? As of 2015, Metro’s fleet had about 1,400 fuel-efficient buses, including hybrid diesel-electric and clean-diesel coaches, electric trolleys, and several battery buses. Our fleet also includes paratransit and DART vehicles, Vanpool vans, and electric cars for the Metropool commute program. A large additional “non-revenue“ fleet used to support service has tow trucks, supervisor vans, maintenance trucks, and more. METRO CONNECTS would require expansion throughout the fleet, including 625 new buses by 2040. Replacement vehicles would also be needed as current vehicles reach the end of their useful lives—usually after 12 to 15 years of service. Compared to the current network, more of the new service proposed in METRO CONNECTS would be in non-peak hours, when we use fewer buses. This means buses would be used more efficiently in the future network, operating for more hours a day. As a result, we could purchase relatively fewer buses compared to the increase in service hours. METRO CONNECTS also envisions moderate expansion of our electric trolley bus network, which in 2015 carried about 20 percent of Metro riders. METRO CONNECTS proposes that Metro would invest strategically in the trolley network, focusing first on places where a relatively small expansion of wire could allow new service concepts to operate successfully. These include places that have frequent service, common overhead wires with existing trolley bus routes, steep hills, and dense urban service areas.