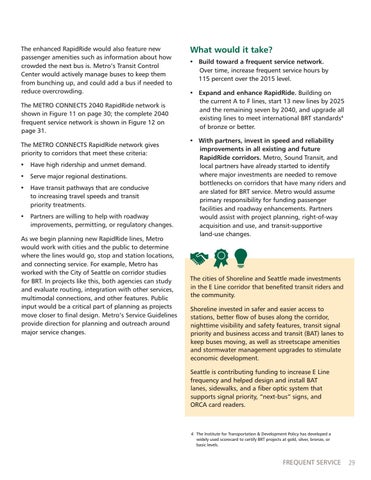 The enhanced RapidRide would also feature new passenger amenities such as information about how crowded the next bus is. Metro’s Transit Control Center would actively manage buses to keep them from bunching up, and could add a bus if needed to reduce overcrowding. The METRO CONNECTS 2040 RapidRide network is shown in Figure 11 on page 30; the complete 2040 frequent service network is shown in Figure 12 on page 31. The METRO CONNECTS RapidRide network gives priority to corridors that meet these criteria: • Have high ridership and unmet demand. • Serve major regional destinations. • Have transit pathways that are conducive to increasing travel speeds and transit priority treatments. • Partners are willing to help with roadway improvements, permitting, or regulatory changes. As we begin planning new RapidRide lines, Metro would work with cities and the public to determine where the lines would go, stop and station locations, and connecting service. For example, Metro has worked with the City of Seattle on corridor studies for BRT. In projects like this, both agencies can study and evaluate routing, integration with other services, multimodal connections, and other features. Public input would be a critical part of planning as projects move closer to final design. Metro’s Service Guidelines provide direction for planning and outreach around major service changes.

What would it take? • Build toward a frequent service network. Over time, increase frequent service hours by 115 percent over the 2015 level. • Expand and enhance RapidRide. Building on the current A to F lines, start 13 new lines by 2025 and the remaining seven by 2040, and upgrade all existing lines to meet international BRT standards4 of bronze or better. • With partners, invest in speed and reliability improvements in all existing and future RapidRide corridors. Metro, Sound Transit, and local partners have already started to identify where major investments are needed to remove bottlenecks on corridors that have many riders and are slated for BRT service. Metro would assume primary responsibility for funding passenger facilities and roadway enhancements. Partners would assist with project planning, right-of-way acquisition and use, and transit-supportive land-use changes.

The cities of Shoreline and Seattle made investments in the E Line corridor that benefited transit riders and the community. Shoreline invested in safer and easier access to stations, better flow of buses along the corridor, nighttime visibility and safety features, transit signal priority and business access and transit (BAT) lanes to keep buses moving, as well as streetscape amenities and stormwater management upgrades to stimulate economic development. Seattle is contributing funding to increase E Line frequency and helped design and install BAT lanes, sidewalks, and a fiber optic system that supports signal priority, “next-bus“ signs, and ORCA card readers.

4 The Institute for Transportation & Development Policy has developed a widely used scorecard to certify BRT projects at gold, silver, bronze, or basic levels.