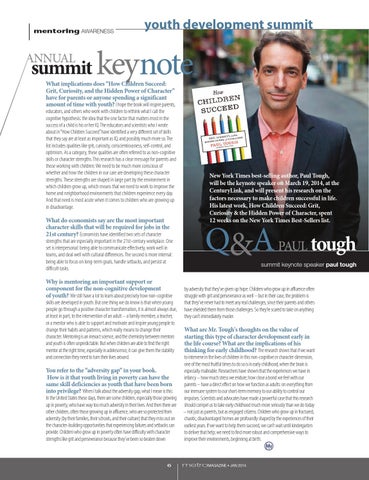 What implications does “How Children Succeed: Grit, Curiosity, and the Hidden Power of Character” have for parents or anyone spending a significant amount of time with youth? I hope the book will inspire parents, educators, and others who work with children to rethink what I call the cognitive hypothesis: the idea that the one factor that matters most in the success of a child is his or her IQ. The educators and scientists who I wrote about in “How Children Succeed” have identified a very different set of skills that they say are at least as important as IQ, and possibly much more so. The list includes qualities like grit, curiosity, conscientiousness, self-control, and optimism. As a category, these qualities are often referred to as non-cognitive skills or character strengths.This research has a clear message for parents and those working with children: We need to be much more conscious of whether and how the children in our care are developing these character strengths. These strengths are shaped in large part by the environment in which children grow up, which means that we need to work to improve the home and neighborhood environments that children experience every day. And that need is most acute when it comes to children who are growing up in disadvantage. What do economists say are the most important character skills that will be required for jobs in the 21st century? Economists have identified two sets of character strengths that are especially important in the 21st-century workplace. One set is interpersonal: being able to communicate effectively, work well in teams, and deal well with cultural differences. The second is more internal: being able to focus on long-term goals, handle setbacks, and persist at difficult tasks.

Why is mentoring an important support or component for the non-cognitive development of youth? We still have a lot to learn about precisely how non-cognitive skills are developed in youth. But one thing we do know is that when young people go through a positive character transformation, it is almost always due, at least in part, to the intervention of an adult – a family member, a teacher, or a mentor who is able to support and motivate and inspire young people to change their habits and patterns, which really means to change their character. Mentoring is an inexact science, and the chemistry between mentors and youth is often unpredictable. But when children are able to find the right mentor at the right time, especially in adolescence, it can give them the stability and connection they need to turn their lives around. You refer to the “adversity gap” in your book. How is it that youth living in poverty can have the same skill deficiencies as youth that have been born into privilege? When I talk about the adversity gap, what I mean is this: In the United States these days, there are some children, especially those growing up in poverty, who have way too much adversity in their lives. And then there are other children, often those growing up in affluence, who are so protected from adversity (by their families, their schools, and their culture) that they miss out on the character-building opportunities that experiencing failures and setbacks can provide. Children who grow up in poverty often have difficulty with character strengths like grit and perseverance because they’ve been so beaten down

New York Times best-selling author, Paul Tough, will be the keynote speaker on March 19, 2014, at the CenturyLink, and will present his research on the factors necessary to make children successful in life. His latest work, How Children Succeed: Grit, Curiosity &amp; the Hidden Power of Character, spent 12 weeks on the New York Times Best-Sellers list.

by adversity that they’ve given up hope. Children who grow up in affluence often struggle with grit and perseverance as well – but in their case, the problem is that they’ve never had to meet any real challenges, since their parents and others have shielded them from those challenges. So they’re scared to take on anything they can’t immediately master. What are Mr. Tough&#39;s thoughts on the value of starting this type of character development early in the life course? What are the implications of his thinking for early childhood? The research shows that if we want to intervene in the lives of children in this non-cognitive or character dimension, one of the most fruitful times to do so is in early childhood, when the brain is especially malleable. Researchers have shown that the experiences we have in infancy – how much stress we endure; how close a bond we feel with our parents – have a direct effect on how we function as adults: on everything from our immune system to our short-term memory to our ability to control our impulses. Scientists and advocates have made a powerful case that this research should compel us to take early childhood much more seriously than we do today – not just as parents, but as engaged citizens. Children who grow up in fractured, chaotic, disadvantaged homes are profoundly shaped by the experiences of their earliest years. If we want to help them succeed, we can’t wait until kindergarten to deliver that help; we need to find more robust and comprehensive ways to improve their environments, beginning at birth.

metroMAGAZINE's January 2014 Issue is online now! metroMAGAZINE is published monthly by ALH Publications, serving the Omaha/Lincoln/Council Bluffs region since 1990. The mission of ALH Publications is to recognize the ongoing efforts of Omaha-area businesses, organizations and individuals to better the community through their support of charitable and civic causes. ALH Publications also encourages people’s desire to give something back to the community. 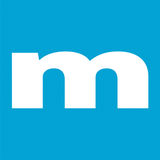