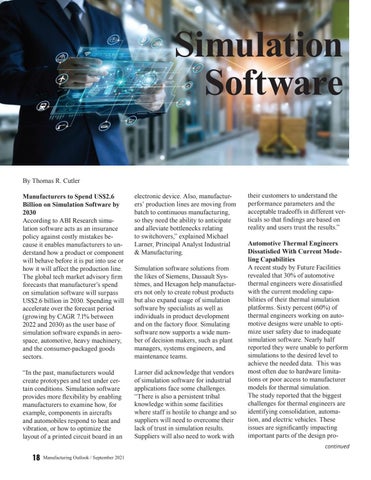 By Thomas R. Cutler Manufacturers to Spend US$2.6 Billion on Simulation Software by 2030 According to ABI Research simulation software acts as an insurance policy against costly mistakes because it enables manufacturers to understand how a product or component will behave before it is put into use or how it will affect the production line. The global tech market advisory firm forecasts that manufacturer’s spend on simulation software will surpass US$2.6 billion in 2030. Spending will accelerate over the forecast period (growing by CAGR 7.1% between 2022 and 2030) as the user base of simulation software expands in aerospace, automotive, heavy machinery, and the consumer-packaged goods sectors.

“In the past, manufacturers would create prototypes and test under certain conditions. Simulation software provides more flexibility by enabling manufacturers to examine how, for example, components in aircrafts and automobiles respond to heat and vibration, or how to optimize the layout of a printed circuit board in an

Larner did acknowledge that vendors of simulation software for industrial applications face some challenges. “There is also a persistent tribal knowledge within some facilities where staff is hostile to change and so suppliers will need to overcome their lack of trust in simulation results. Suppliers will also need to work with

Simulation software solutions from the likes of Siemens, Dassault Systèmes, and Hexagon help manufacturers not only to create robust products but also expand usage of simulation software by specialists as well as individuals in product development and on the factory floor. Simulating software now supports a wide number of decision makers, such as plant managers, systems engineers, and maintenance teams.

their customers to understand the performance parameters and the acceptable tradeoffs in different verticals so that findings are based on reality and users trust the results.” Automotive Thermal Engineers Dissatisfied With Current Modeling Capabilities A recent study by Future Facilities revealed that 30% of automotive thermal engineers were dissatisfied with the current modeling capabilities of their thermal simulation platforms. Sixty percent (60%) of thermal engineers working on automotive designs were unable to optimize user safety due to inadequate simulation software. Nearly half reported they were unable to perform simulations to the desired level to achieve the needed data. This was most often due to hardware limitations or poor access to manufacturer models for thermal simulation. The study reported that the biggest challenges for thermal engineers are identifying consolidation, automation, and electric vehicles. These issues are significantly impacting important parts of the design procontinued