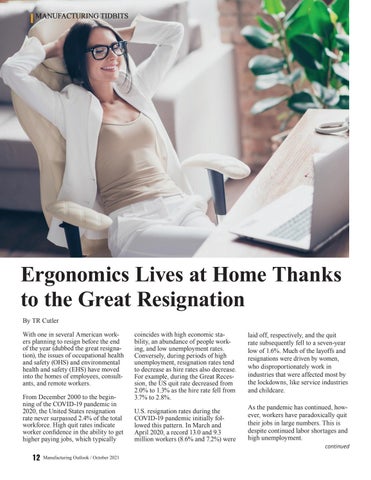 Ergonomics Lives at Home Thanks to the Great Resignation By TR Cutler With one in several American workers planning to resign before the end of the year (dubbed the great resignation), the issues of occupational health and safety (OHS) and environmental health and safety (EHS) have moved into the homes of employees, consultants, and remote workers. From December 2000 to the beginning of the COVID-19 pandemic in 2020, the United States resignation rate never surpassed 2.4% of the total workforce. High quit rates indicate worker confidence in the ability to get higher paying jobs, which typically

coincides with high economic stability, an abundance of people working, and low unemployment rates. Conversely, during periods of high unemployment, resignation rates tend to decrease as hire rates also decrease. For example, during the Great Recession, the US quit rate decreased from 2.0% to 1.3% as the hire rate fell from 3.7% to 2.8%. U.S. resignation rates during the COVID-19 pandemic initially followed this pattern. In March and April 2020, a record 13.0 and 9.3 million workers (8.6% and 7.2%) were

laid off, respectively, and the quit rate subsequently fell to a seven-year low of 1.6%. Much of the layoffs and resignations were driven by women, who disproportionately work in industries that were affected most by the lockdowns, like service industries and childcare. As the pandemic has continued, however, workers have paradoxically quit their jobs in large numbers. This is despite continued labor shortages and high unemployment. continued

In This Issue: Awards As Marketing for the Industrial Sector, Manufacturers Discover Micro-influencers Drive Brand awareness and Sales, Ergonomics Lives at Home Thanks to the Great Resignation, The Cass Transportation Index, The ISM Manufacturing Report On Business, Asia Outlook and much more!