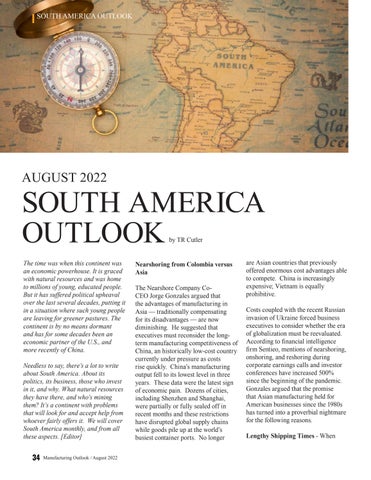 The time was when this continent was an economic powerhouse. It is graced with natural resources and was home to millions of young, educated people. But it has suffered political upheaval over the last several decades, putting it in a situation where such young people are leaving for greener pastures. The continent is by no means dormant and has for some decades been an economic partner of the U.S., and more recently of China. Needless to say, there’s a lot to write about South America. About its politics, its business, those who invest in it, and why. What natural resources they have there, and who’s mining them? It’s a continent with problems that will look for and accept help from whoever fairly offers it. We will cover South America monthly, and from all these aspects. [Editor]

Nearshoring from Colombia versus Asia The Nearshore Company CoCEO Jorge Gonzales argued that the advantages of manufacturing in Asia — traditionally compensating for its disadvantages — are now diminishing. He suggested that executives must reconsider the longterm manufacturing competitiveness of China, an historically low-cost country currently under pressure as costs rise quickly. China’s manufacturing output fell to its lowest level in three years. These data were the latest sign of economic pain. Dozens of cities, including Shenzhen and Shanghai, were partially or fully sealed off in recent months and these restrictions have disrupted global supply chains while goods pile up at the world’s busiest container ports. No longer

are Asian countries that previously offered enormous cost advantages able to compete. China is increasingly expensive; Vietnam is equally prohibitive. Costs coupled with the recent Russian invasion of Ukraine forced business executives to consider whether the era of globalization must be reevaluated. According to financial intelligence firm Sentieo, mentions of nearshoring, onshoring, and reshoring during corporate earnings calls and investor conferences have increased 500% since the beginning of the pandemic. Gonzales argued that the promise that Asian manufacturing held for American businesses since the 1980s has turned into a proverbial nightmare for the following reasons. Lengthy Shipping Times - When

In This Issue: Rare Earth Wars, Reshoring Manufacturing And Assembly Services, What To Do About Supply Chain Disruption?, Female Ukrainian Leadership Prevails, ISM Manufacturing Report On Business, The Cass Transportation Index, Africa Outlook, and much more!