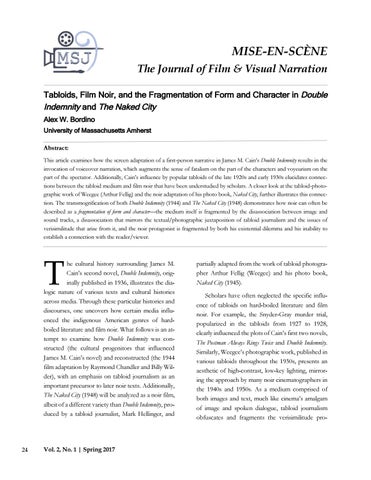 MISE-EN-SCÈNE The Journal of Film &amp; Visual Narration Tabloids, Film Noir, and the Fragmentation of Form and Character in Double Indemnity and The Naked City Alex W. Bordino University of Massachusetts Amherst

Abstract: This article examines how the screen adaptation of a first-person narrative in James M. Cain’s Double Indemnity results in the invocation of voiceover narration, which augments the sense of fatalism on the part of the characters and voyeurism on the part of the spectator. Additionally, Cain’s influence by popular tabloids of the late 1920s and early 1930s elucidates connections between the tabloid medium and film noir that have been understudied by scholars. A closer look at the tabloid-photographic work of Weegee (Arthur Fellig) and the noir adaptation of his photo book, Naked City, further illustrates this connection. The transmogrification of both Double Indemnity (1944) and The Naked City (1948) demonstrates how noir can often be described as a fragmentation of form and character—the medium itself is fragmented by the disassociation between image and sound tracks, a disassociation that mirrors the textual/photographic juxtaposition of tabloid journalism and the issues of verisimilitude that arise from it, and the noir protagonist is fragmented by both his existential dilemma and his inability to establish a connection with the reader/viewer.

he cultural history surrounding James M. Cain’s second novel, Double Indemnity, originally published in 1936, illustrates the dialogic nature of various texts and cultural histories across media. Through these particular histories and discourses, one uncovers how certain media influenced the indigenous American genres of hardboiled literature and film noir. What follows is an attempt to examine how Double Indemnity was constructed (the cultural progenitors that influenced James M. Cain’s novel) and reconstructed (the 1944 film adaptation by Raymond Chandler and Billy Wilder), with an emphasis on tabloid journalism as an important precursor to later noir texts. Additionally, The Naked City (1948) will be analyzed as a noir film, albeit of a different variety than Double Indemnity, produced by a tabloid journalist, Mark Hellinger, and

partially adapted from the work of tabloid photographer Arthur Fellig (Weegee) and his photo book, Naked City (1945). Scholars have often neglected the specific influence of tabloids on hard-boiled literature and film noir. For example, the Snyder-Gray murder trial, popularized in the tabloids from 1927 to 1928, clearly influenced the plots of Cain’s first two novels, The Postman Always Rings Twice and Double Indemnity. Similarly, Weegee’s photographic work, published in various tabloids throughout the 1930s, presents an aesthetic of high-contrast, low-key lighting, mirroring the approach by many noir cinematographers in the 1940s and 1950s. As a medium comprised of both images and text, much like cinema’s amalgam of image and spoken dialogue, tabloid journalism obfuscates and fragments the verisimilitude pro-

This edition includes articles on tabloids and film noir; the cinematic stylings of J.M. Coetzee's novel and opera, Slow Man; and a close analysis of the opening sequence in M. Night Shyamalan's Signs. Interviewer Paul Risker sits down with filmmakers Jorg Tittel and Alex Helfrecht to discuss their dystopian film, The White King. Rounding out the issue is a review of the International Film Festival Rotterdam, written by correspondent Rohan Berry Crickmar. 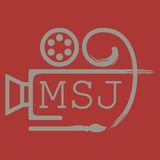