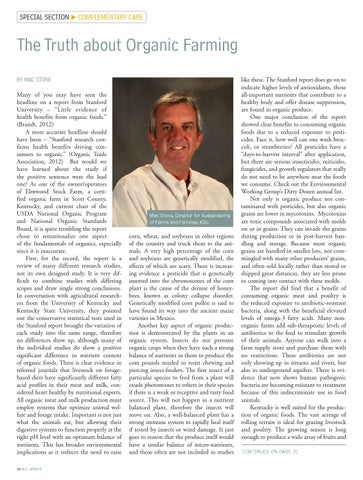 The Truth about Organic Farming By Mac Stone Many of you may have seen the headline on a report from Stanford University – “Little evidence of health benefits from organic foods.” (Brandt, 2012) A more accurate headline should have been – “Stanford research confirms health benefits driving consumers to organic.” (Organic Trade Association, 2012) But would we have learned about the study if the positive sentence were the lead one? As one of the owner/operators of Elmwood Stock Farm, a certified organic farm in Scott County, Kentucky, and current chair of the USDA National Organic Program and National Organic Standards Board, it is quite troubling the report chose to sensationalize one aspect of the fundamentals of organics, especially since it is inaccurate. First, for the record, the report is a review of many different research studies, not its own designed study. It is very difficult to combine studies with differing scopes and draw single strong conclusions. In conversation with agricultural researchers from the University of Kentucky and Kentucky State University, they pointed out the conservative statistical tests used in the Stanford report brought the variation of each study into the same range, therefore no differences show up, although many of the individual studies do show a positive significant difference in nutrient content of organic foods. There is clear evidence in refereed journals that livestock on foragebased diets have significantly different fatty acid profiles in their meat and milk, considered heart healthy by nutritional experts. All organic meat and milk production must employ systems that optimize animal welfare and forage intake. Important is not just what the animals eat, but allowing their digestive systems to function properly at the right pH level with an optimum balance of nutrients. This has broader environmental implications as it reduces the need to raise 24 M.D. Update

Mac Stone, Director for Sustainability of Farms and Families, KSU

corn, wheat, and soybeans in other regions of the country and truck them to the animals. A very high percentage of the corn and soybeans are genetically modified, the effects of which are scary. There is increasing evidence a pesticide that is genetically inserted into the chromosomes of the corn plant is the cause of the demise of honeybees, known as colony collapse disorder. Genetically modified corn pollen is said to have found its way into the ancient maize varieties in Mexico. Another key aspect of organic production is demonstrated by the plants in an organic system. Insects do not pressure organic crops when they have such a strong balance of nutrients in them to produce the com pounds needed to resist chewing and piercing insect-feeders. The first insect of a particular species to feed from a plant will exude pheromones to others in their species if there is a weak or receptive and tasty food source. This will not happen in a nutrient balanced plant, therefore the insects will move on. Also, a well-balanced plant has a strong immune system to rapidly heal itself if tested by insects or wind damage. It just goes to reason that the produce itself would have a similar balance of micro-nutrients, and those often are not included in studies

like these. The Stanford report does go on to indicate higher levels of antioxidants, those all-important nutrients that contribute to a healthy body and offer disease suppression, are found in organic produce. One major conclusion of the report showed clear benefits to consuming organic foods due to a reduced exposure to pesticides. Face it, how well can one wash broccoli, or strawberries? All pesticides have a “days-to-harvest interval” after application, but there are serious insecticides, miticides, fungicides, and growth regulators that really do not need to be anywhere near the foods we consume. Check out the Environmental Working Group’s Dirty Dozen annual list. Not only is organic produce not contaminated with pesticides, but also organic grains are lower in mycotoxins. Mycotoxins are toxic compounds associated with molds on or in grains. They can invade the grains during production or in post-harvest handling and storage. Because most organic grains are handled in smaller lots, not commingled with many other producers’ grains, and often sold locally rather than stored or shipped great distances, they are less prone to coming into contact with these molds. The report did find that a benefit of consuming organic meat and poultry is the reduced exposure to antibiotic-resistant bacteria, along with the beneficial elevated levels of omega-3 fatty acids. Many nonorganic farms add sub-therapeutic levels of antibiotics to the feed to stimulate growth of their animals. Anyone can walk into a farm supply store and purchase them with no restrictions. These antibiotics are not only showing up in streams and rivers, but also in underground aquifers. There is evidence that now shows human pathogenic bacteria are becoming resistant to treatment because of this indiscriminate use in food animals. Kentucky is well suited for the production of organic foods. The vast acreage of rolling terrain is ideal for grazing livestock and poultry. The growing season is long enough to produce a wide array of fruits and Continues on page 31