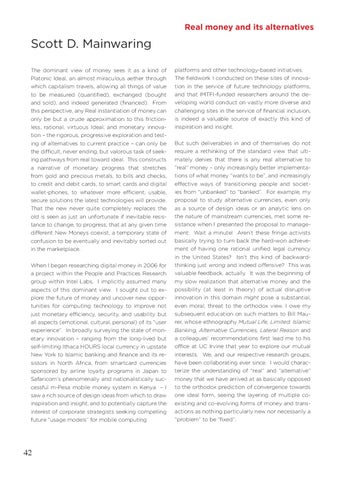 Real money and its alternatives

Scott D. Mainwaring The dominant view of money sees it as a kind of Platonic Ideal, an almost miraculous aether through which capitalism travels, allowing all things of value to be measured (quantified), exchanged (bought and sold), and indeed generated (financed). From this perspective, any Real instantiation of money can only be but a crude approximation to this frictionless, rational, virtuous Ideal; and monetary innovation – the rigorous, progressive exploration and testing of alternatives to current practice – can only be the difficult, never ending, but valorous task of seeking pathways from real toward ideal. This constructs a narrative of monetary progress that stretches from gold and precious metals, to bills and checks, to credit and debit cards, to smart cards and digital wallet-phones, to whatever more efficient, usable, secure solutions the latest technologies will provide. That the new never quite completely replaces the old is seen as just an unfortunate if inevitable resistance to change, to progress; that at any given time different New Moneys coexist, a temporary state of confusion to be eventually and inevitably sorted out in the marketplace. When I began researching digital money in 2006 for a project within the People and Practices Research group within Intel Labs, I implicitly assumed many aspects of this dominant view. I sought out to explore the future of money and uncover new opportunities for computing technology to improve not just monetary efficiency, security, and usability but all aspects (emotional, cultural, personal) of its “user experience”. In broadly surveying the state of monetary innovation – ranging from the long-lived but self-limiting Ithaca HOURS local currency in upstate New York to Islamic banking and finance and its resistors in North Africa, from smartcard currencies sponsored by airline loyalty programs in Japan to Safaricom’s phenomenally and nationalistically successful m-Pesa mobile money system in Kenya – I saw a rich source of design ideas from which to draw inspiration and insight, and to potentially capture the interest of corporate strategists seeking compelling future “usage models” for mobile computing

platforms and other technology-based initiatives. The fieldwork I conducted on these sites of innovation in the service of future technology platforms, and that IMTFI-funded researchers around the developing world conduct on vastly more diverse and challenging sites in the service of financial inclusion, is indeed a valuable source of exactly this kind of inspiration and insight. But such deliverables in and of themselves do not require a rethinking of the standard view that ultimately denies that there is any real alternative to “real” money – only increasingly better implementations of what money “wants to be”, and increasingly effective ways of transitioning people and societies from “unbanked” to “banked”. For example, my proposal to study alternative currencies, even only as a source of design ideas or an analytic lens on the nature of mainstream currencies, met some resistance when I presented the proposal to management: Wait a minute! Aren’t these fringe activists basically trying to turn back the hard-won achievement of having one rational unified legal currency in the United States? Isn’t this kind of backwardthinking just wrong and indeed offensive? This was valuable feedback, actually. It was the beginning of my slow realization that alternative money and the possibility (at least in theory) of actual disruptive innovation in this domain might pose a substantial, even moral, threat to the orthodox view. I owe my subsequent education on such matters to Bill Maurer, whose ethnography Mutual Life, Limited: Islamic Banking, Alternative Currencies, Lateral Reason and a colleagues’ recommendations first lead me to his office at UC Irvine that year to explore our mutual interests. We, and our respective research groups, have been collaborating ever since. I would characterize the understanding of “real” and “alternative” money that we have arrived at as basically opposed to the orthodox prediction of convergence towards one ideal form, seeing the layering of multiple coexisting and co-evolving forms of money and transactions as nothing particularly new nor necessarily a “problem” to be “fixed”.

Overview of research from The Institute for Money Technology and Financial Inclusion. International research investigating how individuals who earn only dollars perday store, share, spend, save and manage money. Particular emphasis is placed on design principles for new financial services. 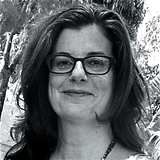