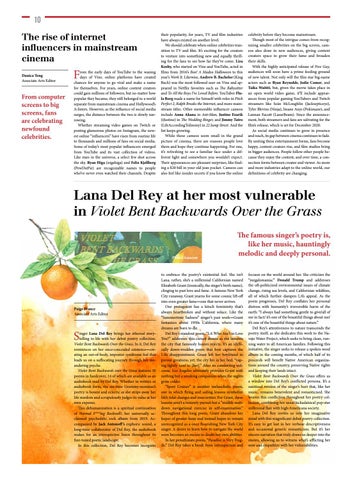 rom the early days of YouTube to the waning days of Vine, online platforms have created chances for anyone to go viral and make a name for themselves. For years, online content creators could gain millions of followers, but no matter how popular they became, they still belonged to a world separate from mainstream cinema and Hollywood’s A-listers. However, as the influence of social media surges, the distance between the two is slowly narrowing. Whether streaming video games on Twitch or posting glamorous photos on Instagram, the newest online “influencers” have risen from routine life to thousands and millions of fans on social media. Some of today’s most popular influencers emerged from YouTube and its vast collection of videos. Like stars in the universe, a select few shot across the sky. Ryan Higa (nigahiga) and Felix Kjellberg (PewDiePie) are recognizable names to people who’ve never even watched their channels. Despite

their popularity, for years, TV and film industries have always existed on another level. We should celebrate when online celebrities transition to TV and film. It’s exciting for the creators to venture into something new and equally thrilling for the fans to see how far they’ve come. Liza Koshy, who started on Vine and YouTube, acted in films from 2016’s Boo! A Madea Halloween to this year’s Work It. Likewise, Andrew B. Bachelor (King Bach) was the most followed user on Vine and appeared in Netflix favorites such as The Babysitter and To All the Boys I’ve Loved Before. YouTuber Flula Borg made a name for himself with roles in Pitch Perfect 2, Ralph Breaks the Internet, and more mainstream titles. Other memorable influencer cameos include Anna Akana in Ant-Man, Justine Ezarik (iJustine) in The Wedding Ringer, and Jimmy Tatro (LifeAccordingToJimmy) in 22 Jump Street. And the list keeps growing. While these cameos seem small in the grand picture of cinema, there are reasons people love them and hope they continue happening. For one, it’s refreshing to see a familiar face under a different light and somewhere you wouldn’t expect. Their appearances are pleasant surprises, like finding a $20 bill in your old jean pocket. Cameos can also feel like insider secrets if you know the online

celebrity before they become mainstream. Though most of the intrigue comes from recognizing smaller celebrities on the big screen, cameos also draw in new audiences, giving content creators space to grow their fame and broaden their skills. With the highly anticipated release of Free Guy, audiences will soon have a prime feeding ground of new talent. Not only will the film star big-name actors such as Ryan Reynolds, Jodie Comer, and Taika Waititi, but, given the movie takes place in an open world video game, it’ll include appearances from popular gaming YouTubers and Twitch streamers like Seán McLoughlin (Jacksepticeye), Tyler Blevins (Ninja), Imane Anys (Pokimane), and Lannan Eacott (LazarBeam). Since the announcement, both streamers and fans are salivating for the film’s release, which is set for December 2020. As social media continues to grow in presence and reach, its gap between cinema continues to fade. By uniting these entertainment forms, fans become happy, content creators rise, and film studios bring in bigger audiences. People follow other people because they enjoy the content, and over time, a connection forms between creator and viewer. As more and more industries adapt to the online world, our definitions of celebrity are changing.

inger Lana Del Rey brings her ethereal storytelling to life with her debut poetry collection, Violet Bent Backwards Over the Grass. In it, Del Rey reminisces on her once-concealed existence—creating an out-of-body, impostor syndrome feel that leads us on a suffocating journey through her meandering psyche. Violet Bent Backwards over the Grass features 30 poems in hardcover, 14 of which are available as an audiobook read by Del Rey. Whether in written or audiobook form, the six-time Grammy-nominee’s poetry is honest and eclectic as she strips away her life stardom and scrupulously judges its value at her own expense. This dehumanization is a spiritual continuation of Normal F***ing Rockwell!, her universally acclaimed psychedelic rock album from 2019. Accompanied by Jack Antonoff ’s euphoric sound, a long-time collaborator of Del Rey, the audiobook makes for an introspective listen throughout its fine-tuned poetic landscape. In this collection, Del Rey becomes incognito

The famous singer’s poetry is, like her music, hauntingly melodic and deeply personal.

to embrace the poetry’s existential feel. She isn’t Lana, rather, she’s a millennial Californian named Elizabeth Grant (ironically, the singer’s birth name), clinging to past love and fame. A famous New York City runaway, Grant yearns for some cosmic lift-off into even greater fame—one that never arrives. Our protagonist has a kitsch femininity that’s always heartbroken and without solace. Like the “Summertime Sadness” singer’s past work—Grant fantasizes about 1950s California, where many dreams are born to die. Del Rey’s standout poem, “LA Who Am I to Love You?” addresses this cursed dream as she laments the city that famously houses rejects. It’s an idyllically down-trodden poem that best captures the LA’s disappointment. Grant left her boyfriend to pursue greatness, yet, the city lies in her bed, “vaping lightly next to [her].” After its comforting welcome, Los Angeles ultimately provides Grant with nothing but a smoking companion when the nights grow colder. “Sport Cruiser” is another melancholic poem, one in which flying and sailing lessons symbolize life’s tidal changes and insecurities. For Grant, these lessons aren’t a leisurely pursuit but a “midlife meltdown navigational exercise in self-examination.” Throughout this long poem, Grant abandons her hopes of greater fame and instead hopes to remain unrecognized as a once flourishing New York City singer. A desire to learn how to navigate the world soon becomes an excuse to doubt her own abilities. In her penultimate poem, “Paradise is Very Fragile,” Del Rey takes a break from introspection and

focuses on the world around her. She criticizes the “megalomaniac” Donald Trump and addresses the oft-politicized environmental issues of climate change, rising sea levels, and Californian wildfires, all of which further dampen LA’s appeal. As the poem progresses, Del Rey conflates her personal distress with humanity’s irreversible harm of the earth: “I always had something gentle to give/all of me in fact/ it’s one of the beautiful things about me/ it’s one of the beautiful things about nature.” Del Rey’s attentiveness to nature transcends the poetry itself, as she dedicates this work to the Navajo Water Project, which seeks to bring clean, running water to all American families. Following this initiative, the singer seeks to release a spoken word album in the coming months, of which half of its proceeds will benefit Native American organizations around the country, preserving Native rights and keeping their lands intact. Violet Bent Backwards Over the Grass offers us a window into Del Rey’s conflicted persona. It’s a sanitized version of the singer’s hurt that, like her music, remains benevolent and romanticised. She weaves this confliction throughout her poetry collection, combining her usual lackadaisical pop-star millennial flair with high Americana society. Lana Del Rey invites us into her imaginative mind with this magnificent debut poetry collection. It’s easy to get lost in her verbose descriptiveness and occasional generic romanticism. But it’s her sincere narration that truly draws us deeper into the stories, allowing us to witness what’s afflicting her now and empathize with her vulnerabilities. 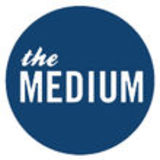