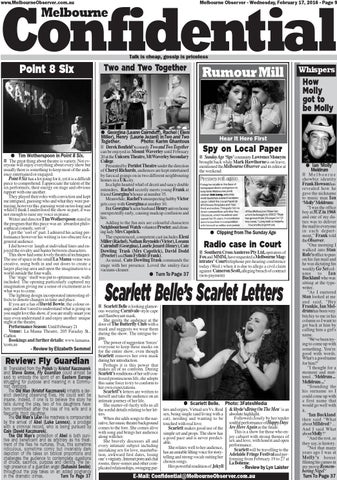 ● Tim Wotherspoon in Point 8 Six. ■ The great thing about theatre is variety. Not everyone will enjoy everything about every show but usually there is something to keep most of the audience entertained or engaged. Point 8 Six has a lot going for it, yet it is a difficult piece to comprehend. I appreciate the talent of the six performers, their energy on stage and obvious rapport with one another. They played their roles with conviction and kept me intrigued, guessing who and what they were portraying, however this guessing went on too long and whilst I think I understood the show in part, it was not enough to raise my voice in praise. Writer and director Tim Wotherspoon stated in the program that this piece was an ’absurdist philosophical comedy, sort of’. I get the ‘sort of’ part. I admired his acting performance however his writing is too obscure for a general audience. I did however laugh at individual lines and enjoyed the rivalry and banter between characters. This show had some lovely theatrical techniques. The use of space in the small La Mama venue was creative, using both in and out doors to create a larger playing area and open the imagination to a world outside the four walls. The ‘stage ‘ itself was put to optimum use, walls included. The opening particularly captured my imagination giving me a sense of excitement as to what was to come. The lighting design incorporated interesting effects to denote changes in time and place. If you are a fan of David Bowie, the colour orange and don’t need to understand what is going on you might love this show, if you are really smart you may even understand it and enjoy another unique night at the theatre. Performance Season: Until February 21 Venue: La Mama Theatre, 205 Faraday St., Carlton Bookings and further details: www.lamama. \com.au - Review by Elizabeth Semmel

■ Translated from the Polish by Kristof Kaczmarek and Steve Gome, Fly Guardian could almost be said to embody the spirit of an Eastern Europe struggling for purpose and meaning in a Communist dystopia. The Old Man (Kristof Kaczmarek) inhabits a derelict dwelling observing flies. He could well be insane. Indeed, if one is to believe the story he tells during the play, two of his daughters have him committed after the loss of his wife and a favourite third daughter. The Old Man’s Lear-like madness is compounded by the arrival of Abel (Luke Lennox), a prodigal with a criminal record, who is being pursued by Cain (Dawid Kaczmarek). The Old Man’s protection of Abel is both punitive and beneficent and as arbitrary as his treatment of the flies he nurtures. Thus, this sometime ridiculous, sometime comic but invariably dark depiction of life takes on biblical proportions and challenges the audience to contemplate questions of choice, sacrifice, purpose and identity. The benign presence of a guardian angel (Suhasini Seelin) throughout the play takes on an added poignancy in the dramatic climax. Turn To Page 37

Two and Two Together

How Molly got to be Molly

Spy on Local Paper ■ Sunday Age ‘Spy’ coumnisty Lawrence Moneym brought back while Mark Hawthorne is on leave, mentioned the Melbourne Observer and its editor at the weekend:

● Clipping from The Sunday Age

Radio case in Court ■ Southern Cross Austereo Pty Ltd, operators of Fox and MMM, have requested a Melbourne Magistrates’ Court telephone pre-hearing conference today (Wed.) when it is due to allege a civil claim against Cameron Scott, alleging breach of contract (non-payment)

● Scarlett Belle. Photo: 3FatesMedia ties and orgies, Virtual sex Vs. Real & Hyde’sBring On The Men’ is an sex, being single (and living with a absolute highlight. Followed closely by her tender cat), needing and wanting to be soulful performance of Happy Days touched with real love. Scarlett makes good use of the Are Here Again as the finale. This is a show for those who ensimple set and props. The show has joy cabaret with strong themes of a good pace and is never predictsex and love, with honest and open able. She relates well to her audience, performance. Scarlett will be travelling to the has an amiable lilting voice for story- Adelaide Fringe Festival and pertelling and strong vocals suiting her forming from February 19 to 27 at chosen songs. La Boheme. Her powerful rendition of Jekyll - Review by Lyn Laister

● Ian ‘Molly’ Meldrum ■ Melbourne showbiz identity Frank Howson has revealed how he gave the nickname to music man Ian ‘Molly’ Meldrum: “I was the office boy at 3UZ in 1968 and one of my duties was to deliver the mail to everyone in each department,” Frank told the Observer. “One morning I walked into Stan Rofe's office to pass on his fan mail and he was dictating his weekly Go Set column to Ian Buckland who was sitting at the typewriter.. “As I enetered Stan looked at me and said, "Hey Frankie, Ian Meldrum has been very bitchiy to me in his column so I want to get back at him by calling him a girl's name. “We've been trying to come up with something. You're good with words. What's a good name for him?" “I thought for a moment and muttered. .."Meldrum ... Melldrum ..." “Sounding the his surname so I could come up with a first name that would go well with it.. “Ian Buckland then said "What about MIldred? ... And I said What about Molly?" “And the rest, as they say, is history. “Not that many years ago I was at Molly’s house filining his cameo in my movie Remembering Nigel “ Turn To Page 37