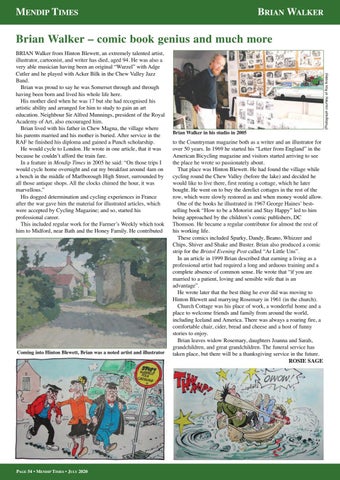 BRIAN Walker from Hinton Blewett, an extremely talented artist, illustrator, cartoonist, and writer has died, aged 94. He was also a very able musician having been an original “Wurzel” with Adge Cutler and he played with Acker Bilk in the Chew Valley Jazz Band. Brian was proud to say he was Somerset through and through having been born and lived his whole life here. His mother died when he was 17 but she had recognised his artistic ability and arranged for him to study to gain an art education. Neighbour Sir Alfred Munnings, president of the Royal Academy of Art, also encouraged him. Brian lived with his father in Chew Magna, the village where his parents married and his mother is buried. After service in the RAF he finished his diploma and gained a Punch scholarship. He would cycle to London. He wrote in one article, that it was because he couldn’t afford the train fare. In a feature in Mendip Times in 2005 he said: “On those trips I would cycle home overnight and eat my breakfast around 4am on a bench in the middle of Marlborough High Street, surrounded by all those antique shops. All the clocks chimed the hour, it was marvellous.” His dogged determination and cycling experiences in France after the war gave him the material for illustrated articles, which were accepted by Cycling Magazine; and so, started his professional career. This included regular work for the Farmer’s Weekly which took him to Midford, near Bath and the Honey Family. He contributed

Coming into Hinton Blewett, Brian was a noted artist and illustrator

Brian Walker in his studio in 2005

to the Countryman magazine both as a writer and an illustrator for over 50 years. In 1969 he started his “Letter from England” in the American Bicycling magazine and visitors started arriving to see the place he wrote so passionately about. That place was Hinton Blewett. He had found the village while cycling round the Chew Valley (before the lake) and decided he would like to live there, first renting a cottage, which he later bought. He went on to buy the derelict cottages in the rest of the row, which were slowly restored as and when money would allow. One of the books he illustrated in 1967 George Haines’ bestselling book “How to be a Motorist and Stay Happy” led to him being approached by the children’s comic publishers, DC Thomson. He became a regular contributor for almost the rest of his working life. These comics included Sparky, Dandy, Beano, Whizzer and Chips, Shiver and Shake and Buster. Brian also produced a comic strip for the Bristol Evening Post called “Ar Little Uns”. In an article in 1999 Brian described that earning a living as a professional artist had required a long and arduous training and a complete absence of common sense. He wrote that “if you are married to a patient, loving and sensible wife that is an advantage”. He wrote later that the best thing he ever did was moving to Hinton Blewett and marrying Rosemary in 1961 (in the church). Church Cottage was his place of work, a wonderful home and a place to welcome friends and family from around the world, including Iceland and America. There was always a roaring fire, a comfortable chair, cider, bread and cheese and a host of funny stories to enjoy. Brian leaves widow Rosemary, daughters Joanna and Sarah, grandchildren, and great grandchildren. The funeral service has taken place, but there will be a thanksgiving service in the future. ROSIE SAGE

Celebrating life on the Mendips and surrounding areas