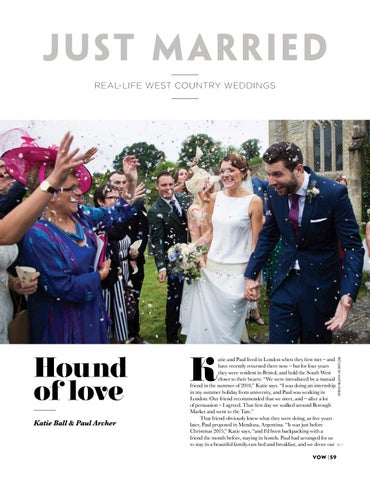 atie and Paul lived in London when they first met – and have recently returned there now – but for four years they were resident in Bristol, and hold the South West closer to their hearts. “We were introduced by a mutual friend in the summer of 2010,” Katie says. “I was doing an internship in my summer holiday from university, and Paul was working in London. Our friend recommended that we meet, and – after a lot of persuasion – I agreed. That first day we walked around Borough Market and went to the Tate.” That friend obviously knew what they were doing, as five years later, Paul proposed in Mendoza, Argentina. “It was just before Christmas 2015,” Katie says, “and I’d been backpacking with a friend the month before, staying in hostels. Paul had arranged for us to stay in a beautiful family-run bed and breakfast, and we drove out