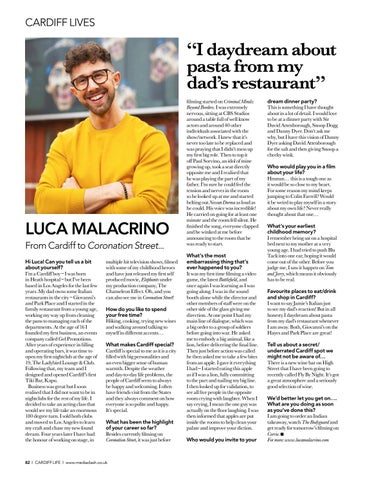 “I daydream about pasta from my dad’s restaurant”

Luca Malacrino From Cardiff to Coronation Street... Hi Luca! Can you tell us a bit about yourself? I’m a Cardiff boy – I was born in Heath hospital – but I’ve been based in Los Angeles for the last few years. My dad owns some Italian restaurants in the city – Giovanni’s and Park Place and I started in the family restaurant from a young age, working my way up from cleaning the pans to managing each of the departments. At the age of 16 I founded my first business, an events company called Gel Promotions. After years of experience in filling and operating bars, it was time to open my first nightclub at the age of 19, The Ladybird Lounge &amp; Club. Following that, my team and I designed and opened Cardiff’s first Tiki Bar, Kapu. Business was great but I soon realised that I did not want to be in nightclubs for the rest of my life. I decided to take an acting class that would see my life take an enormous 180 degree turn. I sold both clubs and moved to Los Angeles to learn my craft and chase my new found dream. Four years later I have had the honour of working on stage, in

multiple hit television shows, filmed with some of my childhood heroes and have just released my first self produced movie, Elephants under my production company, The Chameleon Effect. Oh, and you can also see me in Coronation Street! How do you like to spend your free time? Hiking, cooking, trying new wines and walking around talking to myself in different accents… What makes Cardiff special? Cardiff is special to me as it is a city filled with big personalities and an even bigger sense of human warmth. Despite the weather and day-to-day life problems, the people of Cardiff seem to always be happy and welcoming. I often have friends visit from the States and they always comment on how everyone is so polite and happy. It’s special. What has been the highlight of your career so far? Besides currently filming on Coronation Street, it was just before

82 I CARDIFF LIFE I www.mediaclash.co.uk

filming started on Criminal Minds: Beyond Borders. I was extremely nervous, sitting at CBS Studios around a table full of well know actors and around 40 other individuals associated with the show/network. I knew that it’s never too late to be replaced and was praying that I didn’t mess up my first big role. Then to top it off Paul Sorvino, an idol of mine growing up, took a seat directly opposite me and I realised that he was playing the part of my father. I’m sure he could feel the tension and nerves in the room so he looked up at me and started belting out Nessun Dorma as loud as he could. His voice was incredible! He carried on going for at least one minute and the room fell silent. He finished the song, everyone clapped and he winked at me before announcing to the room that he was ready to start. What’s the most embarrassing thing that’s ever happened to you? It was my first time filming a video game, the latest Battlefield, and once again I was learning as I was going along. I was in the sound booth alone while the director and other members of staff were on the other side of the glass giving me direction. At one point I had my main line of dialogue, which was a big order to a group of soldiers before going into war. He asked me to embody a big animal, like a lion, before delivering the final line. Then just before action was called he then asked me to take a few bites from an apple. I gave it everything I had – I started eating this apple as if I was a lion, fully committing to the part and nailing my big line. I then looked up for validation, to see all five people in the opposite room crying with laughter. When I say crying, I mean the one guy was actually on the floor laughing. I was then informed that apples are put inside the rooms to help clean your palate and improve your diction. Who would you invite to your

dream dinner party? This is something I have thought about in a lot of detail. I would love to be at a dinner party with Sir David Attenborough, Snoop Dogg and Danny Dyer. Don’t ask me why, but I have this vision of Danny Dyer asking David Attenborough for the salt and then giving Snoop a cheeky wink. Who would play you in a film about your life? Hmmm… this is a tough one as it would be so close to my heart. For some reason my mind keeps jumping to Colin Farrell? Would it be weird to play myself in a story about my own life? Never really thought about that one… What’s your earliest childhood memory? I remember being sat on a hospital bed next to my mother at a very young age. I had tried to push Blu Tack into one ear, hoping it would come out of the other. Before you judge me, I saw it happen on Tom and Jerry, which means it obviously has to be real. Favourite places to eat/drink and shop in Cardiff? I want to say Jamie’s Italian just to see my dad’s reaction! But in all honesty I daydream about pasta from my dad’s restaurant whenever I am away. Both, Giovanni’s on the Hayes and Park Place are great! Tell us about a secret/ underrated Cardiff spot we might not be aware of… There is a new wine bar on High Street that I have been going to recently called Fly By Night. It’s got a great atmosphere and a seriously good selection of wine. We’d better let you get on…. What are you doing as soon as you’ve done this? I am going to order an Indian takeaway, watch The Bodyguard and get ready for tomorrow’s filming on Corrie. n For more: www.lucamalacrino.com