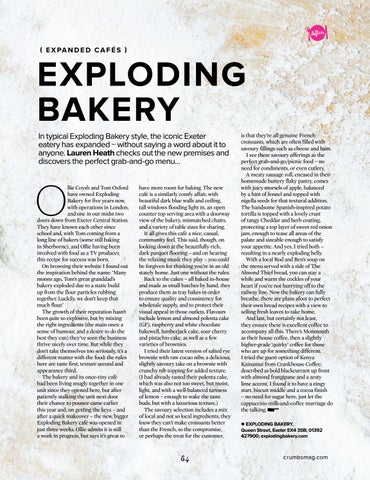 EXPLODING BAKERY In typical Exploding Bakery style, the iconic Exeter eatery has expanded − without saying a word about it to anyone. Lauren Heath checks out the new premises and discovers the perfect grab-and-go menu…

llie Coysh and Tom Oxford have owned Exploding Bakery for five years now, with operations in London, and one in our midst two doors down from Exeter Central Station. They have known each other since school and, with Tom coming from a long line of bakers (some still baking in Sherborne), and Ollie having been involved with food as a TV producer, this recipe for success was born. On browsing their website I found out the inspiration behind the name: ‘Many moons ago, Tom’s great granddad’s bakery exploded due to a static build up from the flour particles rubbing together. Luckily, we don’t keep that much flour.’ The growth of their reputation hasn’t been quite so explosive, but by mixing the right ingredients (the main ones: a sense of humour, and a desire to do the best they can) they’ve seen the business thrive nicely over time. But while they don’t take themselves too seriously, it’s a different matter with the food: the rules here are taste first, texture second and appearance third. The bakery and its once-tiny café had been living snugly together in one unit since they opened here, but after patiently stalking the unit next door their chance to pounce came earlier this year and, on getting the keys – and after a quick makeover – the new, bigger Exploding Bakery café was opened in just three weeks. Ollie admits it is still a work in progress, but says it’s great to

have more room for baking. The new café is a similarly comfy affair, with beautiful dark blue walls and ceiling, tall windows flooding light in, an open counter top serving area with a doorway view of the bakery, mismatched chairs, and a variety of table sizes for sharing. It all gives this café a nice, casual, community feel. This said, though, on looking down at the beautifully rich, dark parquet flooring – and on hearing the relaxing music they play – you could be forgiven for thinking you’re in an old stately home. Just one without the rules. Back to the cakes – all baked in-house and made as small batches by hand, they produce them as tray bakes in order to ensure quality and consistency for wholesale supply, and to protect their visual appeal in those outlets. Flavours include lemon and almond polenta cake (GF), raspberry and white chocolate bakewell, lumberjack cake, sour cherry and pistachio cake, as well as a few varieties of brownies. I tried their latest version of salted rye brownie with raw cocao nibs; a delicious, slightly savoury take on a brownie with crunchy nib topping for added texture. (I had already tasted their polenta cake, which was also not too sweet, but moist, light, and with a well-balanced tartness of lemon – enough to wake the taste buds, but with a luxurious texture.) The savoury selection includes a mix of local and not so local ingredients; they know they can’t make croissants better than the French, so the compromise, or perhaps the treat for the customer,

is that they’re all genuine French croissants, which are often filled with savoury fillings such as cheese and ham. I see these savoury offerings as the perfect grab-and-go/picnic food – no need for condiments, or even cutlery. A meaty sausage roll, encased in their homemade buttery flaky pastry, comes with juicy morsels of apple, balanced by a hint of fennel and topped with nigella seeds for that textural addition. The handsome Spanish-inspired potato tortilla is topped with a lovely crust of tangy Cheddar and herb coating, protecting a top layer of sweet red onion jam, enough to tease all areas of the palate and sizeable enough to satisfy your appetite. And yes, I tried both – resulting in a nearly exploding belly. With a local Rod and Ben’s soup on the menu served with a side of The Almond Thief bread, you can stay a while and warm the cockles of your heart if you’re not hurrying off to the railway line. Now the bakery can fully breathe, there are plans afoot to perfect their own bread recipes with a view to selling fresh loaves to take home. And last, but certainly not least, they ensure there is excellent coffee to accompany all this. There’s Monmouth as their house coffee, then a slightly higher-grade ‘quirky’ coffee for those who are up for something different. I tried the guest option of Kenya Kainamui from Crankhouse Coffee; described as bold blackcurrant up front with almond frangipane and a zesty lime accent, I found it to have a zingy start, biscuit middle and a cocoa finish – no need for sugar here, just let the cappuccino milk-and-coffee marriage do the talking. ✱ EXPLODING BAKERY, Queen Street, Exeter EX4 3SB; 01392 427900; explodingbakery.com