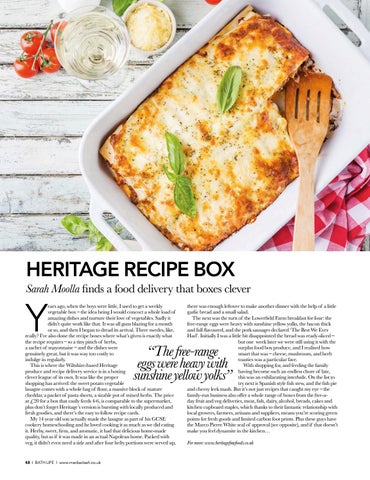 ears ago, when the boys were little, I used to get a weekly vegetable box – the idea being I would concoct a whole load of amazing dishes and nurture their love of vegetables. Sadly it didn’t quite work like that. It was all guns blazing for a month or so, and then I began to dread its arrival. Three swedes, like, really? I’ve also done the recipe boxes where what’s given is exactly what the recipe requires – so a tiny pinch of herbs, a sachet of mayonnaise – and the dishes were genuinely great, but it was way too costly to indulge in regularly. This is where the Wiltshire-based Heritage produce and recipe delivery service is in a boxing clever league of its own. It was like the proper shopping has arrived: the sweet potato vegetable lasagne comes with a whole bag of flour, a massive block of mature cheddar, a packet of pasta sheets, a sizable pot of mixed herbs. The price at £20 for a box that easily feeds 4-6, is comparable to the supermarket, plus don’t forget Heritage’s version is bursting with locally produced and fresh goodies, and there’s the easy to follow recipe cards. My 14 year old son actually made the lasagne as part of his GCSE cookery homeschooling and he loved cooking it as much as we did eating it. Herby, sweet, firm, and aromatic, it had that delicious home-made quality, but as if it was made in an actual Napolean home. Packed with veg, it didn’t even need a side and after four hefty portions were served up,

48 I BATH LIFE I www.mediaclash.co.uk

there was enough leftover to make another dinner with the help of a little garlic bread and a small salad. The next was the turn of the Lowerfield Farm breakfast for four: the free-range eggs were heavy with sunshine yellow yolks, the bacon thick and full flavoured, and the pork sausages declared ‘The Best We Ever Had’. Initially I was a little bit disappointed the bread was ready-sliced – but one week later we were still using it with the surplus food box produce, and I realised how smart that was – cheese, mushroom, and herb toasties was a particular fave. With shopping for, and feeding the family having become such an endless chore of late, this was an exhilarating interlude. On the list to try next is Spanish style fish stew, and the fish pie and cheesy leek mash. But it’s not just recipes that caught my eye – the family-run business also offer a whole range of boxes from the five-aday fruit and veg deliveries, meat, fish, dairy, alcohol, breads, cakes and kitchen cupboard staples, which thanks to their fantastic relationship with local growers, farmers, artisans and suppliers, means you’re scoring green points for fresh goods and limited carbon foot prints. Plus these guys have the Marco Pierre White seal of approval (see opposite), and if that doesn’t make you feel dynamite in the kitchen…

“The free-range eggs were heavy with sunshine yellow yolks”