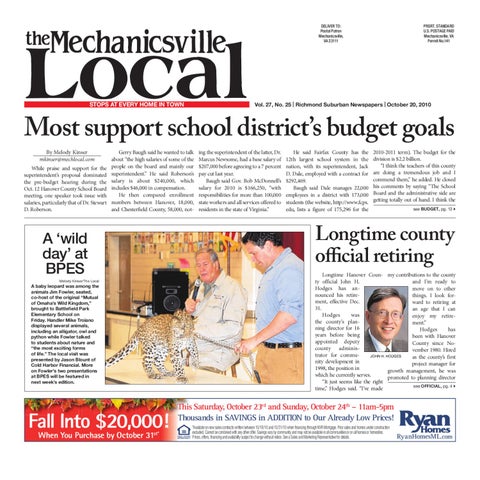 STOPS AT EVERY HOME IN TOWN

Most support school district’s budget goals By Melody Kinser mkinser@mechlocal.com While praise and support for the superintendent’s proposal dominated the pre-budget hearing during the Oct. 12 Hanover County School Board meeting, one speaker took issue with salaries, particularly that of Dr. Stewart D. Roberson.

Gerry Baugh said he wanted to talk about “the high salaries of some of the people on the board and mainly our superintendent.” He said Roberson’s salary is about $240,000, which includes $46,000 in compensation. He then compared enrollment numbers between Hanover, 18,000, and Chesterfield County, 58,000, not-

ing the superintendent of the latter, Dr. Marcus Newsome, had a base salary of $207,000 before agreeing to a 7 percent pay cut last year. Baugh said Gov. Bob McDonnell’s salary for 2010 is $166,250, “with responsibilities for more than 100,000 state workers and all services offered to residents in the state of Virginia.”

2010-2011 term). The budget for the division is $2.2 billion. “I think the teachers of this county are doing a tremendous job and I commend them,” he added. He closed his comments by saying “The School Board and the administrative side are getting totally out of hand. I think the see BUDGET, pg. 13 &#96;

A ‘wild day’ at BPES

Longtime Hanover Coun- my contributions to the county ty official John H. and I’m ready to Hodges has anmove on to other nounced his retirethings. I look forment, effective Dec. ward to retiring at 31. an age that I can Hodges was enjoy my retirethe county’s planment.” ning director for 16 Hodges has years before being been with Hanover appointed deputy County since Nocounty adminisvember 1980. Hired trator for commuJOHN H. HODGES as the county’s first nity development in project manager for 1998, the position in growth management, he was which he currently serves. promoted to planning director “It just seems like the right see OFFICIAL, pg. 4 &#96; time,” Hodges said. “I’ve made

A baby leopard was among the animals Jim Fowler, seated, co-host of the original “Mutual of Omaha’s Wild Kingdom,” brought to Battlefield Park Elementary School on Friday. Handler Mike Troiano displayed several animals, including an alligator, owl and python while Fowler talked to students about nature and “the most exciting forms of life.” The local visit was presented by Jason Blount of Cold Harbor Financial. More on Fowler’s two presentations at BPES will be featured in next week’s edition.

This Saturday, October 23rd and Sunday, October 24th – 11am-5pm Thousands in SAVINGS in ADDITION to Our Already Low Prices! *Available on new sales contracts written between 10/18/10 and 10/31/10 when ﬁnancing through NVR Mortgage. Prior sales and homes under construction excluded. Cannot be combined with any other offer. Savings vary by community and may not be available in all communities or on all homes or homesites. Prices, offers, ﬁnancing and availability subject to change without notice. See a Sales and Marketing Representative for details.

The Mechanicsville Local – 10/20/2010 © 2010 by Richmond Suburban Newspapers. All advertising and editorial matter is fully protected and may not be reproduced in any manner without the permission of the publisher. 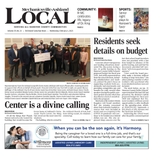