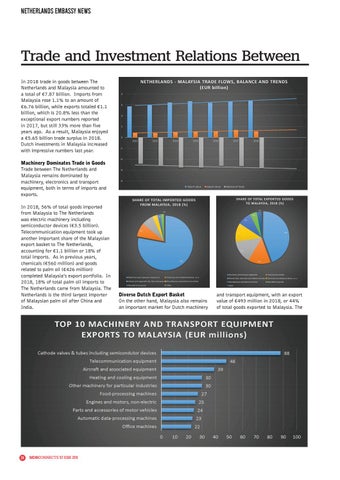 Trade and Investment Relations Between In 2018 trade in goods between The Netherlands and Malaysia amounted to a total of €7.87 billion. Imports from Malaysia rose 1.1% to an amount of €6.76 billion, while exports totaled €1.1 billion, which is 20.8% less than the exceptional export numbers reported in 2017, but still 33% more than five years ago. As a result, Malaysia enjoyed a €5.65 billion trade surplus in 2018. Dutch investments in Malaysia increased with impressive numbers last year. Machinery Dominates Trade in Goods Trade between The Netherlands and Malaysia remains dominated by machinery, electronics and transport equipment, both in terms of imports and exports. In 2018, 56% of total goods imported from Malaysia to The Netherlands was electric machinery including semiconductor devices (€3.5 billion). Telecommunication equipment took up another important share of the Malaysian export basket to The Netherlands, accounting for €1.1 billion or 18% of total imports. As in previous years, chemicals (€560 million) and goods related to palm oil (€426 million) completed Malaysia’s export portfolio. In 2018, 18% of total palm oil imports to The Netherlands came from Malaysia. The Netherlands is the third largest importer of Malaysian palm oil after China and India.

and transport equipment, with an export value of €493 million in 2018, or 44% of total goods exported to Malaysia. The

In this edition of MDBCONNECTS, we highlight our Student Internship Program as it surpasses the placement of 1,000 Dutch student interns here in Malaysia, celebrate being recognized as one of the best Dutch Chambers in the world, and witness continued growth in the membership. Each magazine is packed full of informative articles and in-depth interviews relevant for any who do business with the Malaysian Dutch Business Community! Do enjoy our digital copy while you wait for your hard copy to arrive! 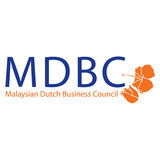