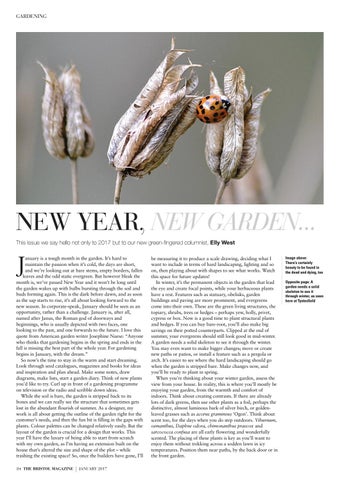 NEW YEAR, NEW GARDEN... This issue we say hello not only to 2017 but to our new green-fingered columnist, Elly West

anuary is a tough month in the garden. It’s hard to maintain the passion when it’s cold, the days are short, and we’re looking out at bare stems, empty borders, fallen leaves and the odd static evergreen. But however bleak the month is, we’ve passed New Year and it won’t be long until the garden wakes up with bulbs bursting through the soil and buds forming again. This is the dark before dawn, and as soon as the sap starts to rise, it’s all about looking forward to the new season. In corporate-speak, January should be seen as an opportunity, rather than a challenge. January is, after all, named after Janus, the Roman god of doorways and beginnings, who is usually depicted with two faces, one looking to the past, and one forwards to the future. I love this quote from American garden writer Josephine Nuese: “Anyone who thinks that gardening begins in the spring and ends in the fall is missing the best part of the whole year. For gardening begins in January, with the dream.” So now’s the time to stay in the warm and start dreaming. Look through seed catalogues, magazines and books for ideas and inspiration and plan ahead. Make some notes, draw diagrams, make lists, start a garden diary. Think of new plants you’d like to try. Curl up in front of a gardening programme on television or the radio and scribble down ideas. While the soil is bare, the garden is stripped back to its bones and we can really see the structure that sometimes gets lost in the abundant flourish of summer. As a designer, my work is all about getting the outline of the garden right for the customer’s needs, and then the fun bit is filling in the gaps with plants. Colour palettes can be changed relatively easily. But the layout of the garden is crucial for a design that works. This year I’ll have the luxury of being able to start from scratch with my own garden, as I’m having an extension built on the house that’s altered the size and shape of the plot – while trashing the existing space! So, once the builders have gone, I’ll 84 THE BRISTOL MAGAZINE

be measuring it to produce a scale drawing, deciding what I want to include in terms of hard landscaping, lighting and so on, then playing about with shapes to see what works. Watch this space for future updates! In winter, it’s the permanent objects in the garden that lead the eye and create focal points, while your herbaceous plants have a rest. Features such as statuary, obelisks, garden buildings and paving are more prominent, and evergreens come into their own. These are the green living structures, the topiary, shrubs, trees or hedges – perhaps yew, holly, privet, cypress or box. Now is a good time to plant structural plants and hedges. If you can buy bare-root, you’ll also make big savings on their potted counterparts. Clipped at the end of summer, your evergreens should still look good in mid-winter. A garden needs a solid skeleton to see it through the winter. You may even want to make bigger changes; move or create new paths or patios, or install a feature such as a pergola or arch. It’s easier to see where the hard landscaping should go when the garden is stripped bare. Make changes now, and you’ll be ready to plant in spring. When you’re thinking about your winter garden, assess the view from your house. In reality, this is where you’ll mostly be enjoying your garden, from the warmth and comfort of indoors. Think about creating contrasts. If there are already lots of dark greens, then use other plants as a foil, perhaps the distinctive, almost luminous bark of silver birch, or goldenleaved grasses such as acorus gramineus ‘Ogon’. Think about scent too, for the days when you do step outdoors. Viburnum, osmanthus, Daphne odora, chimonanthus praecox and sarcococca confusa are all early flowering and wonderfully scented. The placing of these plants is key as you’ll want to enjoy them without trekking across a sodden lawn in icy temperatures. Position them near paths, by the back door or in the front garden.

Image above: There’s certainly beauty to be found in the dead and dying, too Opposite page: A garden needs a solid skeleton to see it through winter, as seen here at Tyntesfield