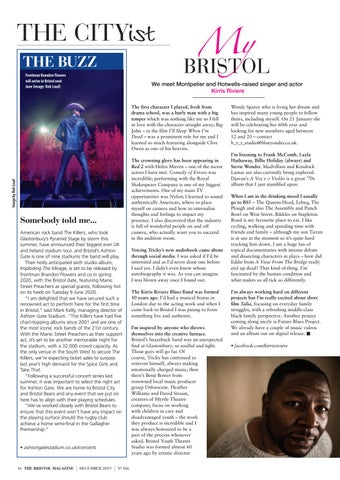 THE CITY THE BUZZ

We meet Montpelier and Hotwells-raised singer and actor Kirris Riviere

The first character I played, fresh from drama school, was a burly man with a big temper which was nothing like me so I fell in love with the character straight away; Big John – in the film I’ll Sleep When I’m Dead – was a prominent role for me and I learned so much featuring alongside Clive Owen as one of his heavies.

Somebody told me... American rock band The Killers, who took Glastonbury’s Pyramid Stage by storm this summer, have announced their biggest ever UK and Ireland stadium tour, and Bristol’s Ashton Gate is one of nine stadiums the band will play. Their hotly anticipated sixth studio album, Imploding The Mirage, is set to be released by frontman Brandon Flowers and co in spring 2020, with the Bristol date, featuring Manic Street Preachers as special guests, following hot on its heels on Tuesday 9 June 2020. “I am delighted that we have secured such a renowned act to perform here for the first time in Bristol,” said Mark Kelly, managing director of Ashton Gate Stadium. “The Killers have had five chart-topping albums since 2001 and are one of the most iconic rock bands of the 21st century. With the Manic Street Preachers as their support act, it’s set to be another memorable night for the stadium, with a 32,000 crowd capacity. As the only venue in the South West to secure The Killers, we’re expecting ticket sales to surpass last year’s high demand for the Spice Girls and Take That. “Following a successful concert series last summer, it was important to select the right act for Ashton Gate. We are home to Bristol City and Bristol Bears and any event that we put on here has to align with their playing schedules. “We’ve worked closely with Bristol Bears to ensure that this event won’t have any impact on the playing surface should the rugby club achieve a home semi-final in the Gallagher Premiership.”

The crowning glory has been appearing in Red 2 with Helen Mirren – one of the nicest actors I have met. Comedy of Errors was incredible; performing with the Royal Shakespeare Company is one of my biggest achievements. One of my main TV opportunities was Nylon; I learned to sound authentically American, where to place myself on camera and how to internalise thoughts and feelings to impact my presence. I also discovered that the industry is full of wonderful people on and off camera, who actually want you to succeed in the audition room. Voicing Tricky’s new audiobook came about through social media. I was asked if I’d be interested and as I’d never done one before I said yes. I didn’t even know whose autobiography it was. As you can imagine I was blown away once I found out. The Kirris Riviere Blues Band was formed 10 years ago. I’d had a musical hiatus in London due to the acting work and when I came back to Bristol I was pining to form something live and authentic. I’m inspired by anyone who throws themselves into the creative furnace. Bristol’s Snazzback band was an unexpected find at Glastonbury; so soulful and tight. Those guys will go far. Of course, Tricky has continued to reinvent himself, always making emotionally charged music; then there’s Benji Bower from renowned local music producer group Unforscene. Heather Williams and David Straun, creators of Myrtle Theatre company, focus on working with children in care and disadvantaged youth – the work they produce is incredible and I was always honoured to be a part of the process whenever asked. Bristol Youth Theatre Studio was formed almost 60 years ago by artistic director

Wendy Sparey who is living her dream and has inspired many young people to follow theirs, including myself. On 21 January she will be celebrating her 60th year and looking for new members aged between 12 and 20 – contact b_y_t_studio@blueyonder.co.uk. I’m listening to Frank McComb, Layla Hathaway, Billie Holiday (always) and Stevie Wonder. Madvillain and Kendrick Lamar are also currently being explored. Djavan’s A Voz e o Violão is a great ’70s album that I just stumbled upon. When I am in the drinking mood I usually go to BS5 – The Queens Head, Lebeq, The Plough and also The Assembly and Punch Bowl on West Street. Bikkles on Stapleton Road is my favourite place to eat. I like cycling, walking and spending time with friends and family – although my son Tieran is at uni at the moment so it’s quite hard tracking him down. I am a huge fan of topical documentaries with intense debate and dissecting characters in plays – how did Eddie from A View From The Bridge really end up dead? That kind of thing. I’m fascinated by the human condition and what makes us all tick so differently. I’m always working hard on different projects but I’m really excited about short film Talia, focusing on everyday family struggles, with a refreshing middle-class black family perspective. Another project coming along nicely is Future Blues Project. We already have a couple of music videos and an album out on digital release. n • facebook.com/kirrisriviere